From Wikipedia, the free encyclopedia
Religious institutes of the Catholic Church
For other uses, see Ursuline (disambiguation).

In 1572 in Milan, under Saint Charles Borromeo, the Archbishop of Milan, members of the Company of Saint Ursula chose to become an enclosed religious order. Pope Gregory XIII placed them under the Rule of Saint Augustine. Especially in France, groups of the company begin to re-shape themselves as cloistered nuns, under solemn vows, and dedicated to the education of girls within the walls of their monasteries. [1]

In the following century, the Ursuline nuns were strongly encouraged and supported by Saint Francis de Sales. They were called the "Ursuline nuns" as distinct from the "federated Ursulines" of the company, who preferred to follow the original way of life. Both forms of life continued to spread throughout Europe and beyond. [2]

The Ursuline sisters were not the first Catholic nuns to land in the new world. They were preceded by the Hieronymites in 1585 in Mexico City, who established the convent of San Jerónimo y Santa Paula. [5] In 1639, Mother Marie of the Incarnation, two other Ursuline nuns, and a Jesuit priest left France for a mission to Canada. When they arrived in the summer of 1639, they studied the languages of the native peoples and then began to educate the native children. [6] They taught reading and writing as well as needlework, embroidery, drawing, and other domestic arts. [7] [8] The Ursuline convent in Quebec City is the oldest educational institution for women in North America. [9] Their work helped to preserve a religious spirit among the French population and to Christianize native peoples and Métis.

See also: History of the Ursulines in New Orleans

The first Ursulines arrived at Mobile, Alabama, in 1719 (though information is contradictory from remaining and available sources). In 1727, 12 Ursulines from France landed in what is now New Orleans. The entire group of Ursulines were the first Roman Catholic nuns in what is now the United States. Both properties were part of the French colony of Louisiana (New France). They came to the country under the auspices of Pope Pius III and Louis XV of France. Following the Louisiana Purchase in 1803, their charter came under the jurisdiction of the United States. [10]

They instituted a convent and school, both of which continue today. [11] Ursuline Academy (New Orleans) is the oldest continually operating Catholic school in the United States and the oldest girls school in the United States. [12] The Ursuline tradition holds many United States firsts in its dedication to the growth of individuals, including the first female pharmacist, first woman to contribute a book of literary merit, first convent, first free school and first retreat center for ladies, first classes for female slaves (which continued until abolition), free women of color (a unique New Orleans group also known as Creoles of Color) and Native Americans. In the Mississippi Valley region, Ursuline provided the first social welfare center. [13]

The Old Ursuline Convent is located in the Vieux Carre (New Orleans' French Quarter). The building now houses the Archdiocese of New Orleans' Archives as well as operating as a tourist attraction/ museum with public tours available almost daily. They had a well established presence as a hospital by the time of the US Revolutionary War. Ursuline sisters treated in the same building both British and United States soldiers wounded in the war. They may have been the first group of women propagating the ideals of diversity in a society, which flowed directly from the teachings of St Ursula and her followers.

Today the monastic Order of St. Ursula (post-nominals OSU) has as its largest group the Ursulines of the Roman Union, described in this article. The other branch is the Company of St. Ursula, commonly called the "Angelines", who follow the original form of life established by their foundress.

The members wore a black dress bound by a leathern girdle, a black sleeveless cloak, and a close-fitting headdress with a white veil and a longer black veil. [16]

In 1767, Nano Nagle stayed with the Ursuline Sisters on Rue des Ursulines in Paris while visiting her cousin Margaret Butler who had been professed just one year previously. In 1771, she established the first Ursuline convent in Ireland on Cove Lane in Cork. The community was made up of four Cork women – who were professed at the Ursuline Convent in the Rue St. Jacques in Paris – together with a reverend mother. [17] [3] In 1825, the sisters and their boarding students relocated to Blackrock. The first Ursuline primary and second-level schools were founded at Blackrock. [18]

At the request of James Butler, Archbishop of Cashel and Emly, Anastasia Tobin went to Cork to train as a religious. She was professed at the Ursuline convent in September 1787, and returned to Thurles where she commenced teaching. Joined in 1796 by two others also trained at Cork, a small Ursuline community was founded at Thurles. In 1816, four sisters from Thurles established a community in Waterford. [19] In 1932, Providence School was opened to serve the needs of the travelling community. [20]

In 1839, George Joseph Plunket Browne, Bishop of Galway, brought the Ursuline Order of nuns to Dangan on the Oughterard road. In 1844, Browne was translated to the Diocese of Elphin. The Ursulines Order followed him to Elphin, first to Summerhill in Athlone and then to Sligo. He raffled his carriage to raise funds to compensate the sisters for the financial loss they suffered by removing to Sligo. There they took up residence at "Seaville", the former house of Bishop Burke, Browne's predecessor, and renamed it St. Joseph's Convent. Nazareth free primary school was built in 1851. [21] In 1952 the Ursulines established St. Angela's College, Sligo for the training of students and teachers in Home Economics, which became recognised college of the National University of Ireland in 1978, and since 2003 is a College of the National University of Ireland, Galway.

The Irish Ursuline Union was established in 1978. 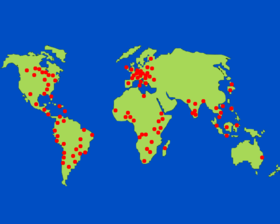 In the United States, the Ursulines have founded two well-known Catholic women's colleges. Ursuline College in Pepper Pike, Ohio, was founded in 1871 by the Ursuline Sisters of Cleveland. It was followed in 1904 by College of New Rochelle, which is located in New Rochelle, New York.

From 1922 to 1975 the Mary Manse College in Toledo, Ohio, was operated by the Ursulines. It was a women's college until 1971, then was coeducational for its final four years.

1927, the Ursuline Sisters of the Eastern Province restructured catholic education in Elkton, Maryland by assisting in the founding of Immaculate Conception School, originally located at the corner of Cathedral Street and Singerly Avenue in historic Elkton, Maryland. The Ursulines ministered within the schoolhouse from 1927 to 1930, followed by the Glen Riddle Franciscan Sisters of Saint Francis of Philadelphia.

In 1932, the Great Falls Junior College for Women was founded in Great Falls, Montana. Now the University of Providence, it has an open admission policy.

In 1966, the Ursulines established in Taiwan what became the Wenzao Ursuline College of Languages.

From 1968 to 2003 the Ursuline Order operated Ursula College at the Australian National University in Canberra, Australia. It is a co-educational residential college for approximately 200 undergraduates. In 2003 the college was sold to the University and was renamed Ursula Hall. The Ursuline tradition has been retained in the Hall's high educational standards, retention of Ursuline symbols and livery, and the observance in October of Ursies Weekend for relaxing and socializing before November exams.

Ursuline secondary education schools are found across the United States and other countries. The first school was Ursuline Academy, began in 1727 in New Orleans, Louisiana. It is the oldest all-girls school in the country. The Academy of Mount St. Ursula High School [22] in the Bronx is the oldest all-girls Catholic high school in New York State, founded in 1855, the same year Sacred Heart Academy in Louisville, Kentucky, was founded.

The Ursuline nuns had been invited to St. Teresa's parish by Rev. James Boyce in 1873 to open a girls’ academy, which was incorporated in 1881 on Henry Street in what is now the Bronx, New York. In 1899 they took possession of a mansion originally built by General Winfield Scott, which he had dubbed, " The Hermitage," and shortly thereafter changed the name of their school from St. Teresa's Ursuline Academy New-York to the Ursuline Academy. In 1905, a news article announced plans for a four-story seminary building to be made for the Convent of St. Theresa on that site by architect Joseph H.McGuire. [23] However, photos show the building unchanged as of 1911. [24] They occupied this building until selling it in 1912, and moving the school to the Ursuline Provinculate at Grand Boulevard and 165th Street. [25]

The Ursuline School in New Rochelle, New York, is a school for girls in grades 6-12 and is closely affiliated with the nearby Iona Preparatory School.[ citation needed]

In the London Borough of Newham, United Kingdom, is the all-female girl school St. Angela's, named after the founder of the Ursulines. Only the sixth form centre of the school allows males. The same applies to the Ursuline High School in Wimbledon, which has recently been selected as a Regional Winner - "London Secondary" in the Church School Awards 2011. [26] Ursulines also have St Ursula's Convent School in Greenwich which educates girls aged 11 to 16 and coeducational Ursuline College, Westgate-on-Sea.

The British philosopher and author Celia Green has written extensively about her time at the Ursuline High School (now Ursuline Academy Ilford) in Ilford, London. [27] Angela de Merici inspired the Ursuline Sisters to provide young women with an opportunity to achieve their full potential. Throughout their lives, students continue to remain part of the Ursuline community and continue to carry forward the legacy of Angela de Merici, by serving their society. [28]

There is an Ursuline Convent, in Ranchi, Jharkhand, India. [29]

In Thailand, the Ursulines established Mater Dei School in Bangkok in 1928. Its elite alumni include Kings Ananda Mahidol and Bhumibol Adulyadej. [30] Although an all-girls school, it enrolled boys from Kindergarten through Primary 2.

In Indonesia, the Ursulines established the Princess Juliana School in Batavia (1912), after its initial establishment as an Ursuline Convent in 1859. Now the school is known as St. Ursula Catholic School and is an all-girls school.[ citation needed]