The Laboratory Schools were founded by American educator John Dewey in 1896 in the Hyde Park neighborhood of Chicago. Calvin Brainerd Cady was director of the music department under Dewey. [4] The school began as a progressive educational institution that goes from nursery school through 12th grade. This experiment was an integral part of the University of Chicago during the years 1896 to 1904, and was an undertaking which aimed to work put, through the University, a school system which should be an organic whole from the kindergarten to the university. Conducted under the management and supervision of the University's Department of Philosophy, Psychology, and Education, it bore the same relation to the work of that department that a laboratory bears to biology, physics, or chemistry. Like any such laboratory it had two main purposes: (1) to exhibit, test, verify, and criticize theoretical statements and principles; and (2) to add to the sum of facts and principles in its special line. For it was part of the philosophical and psychological theory he entertained that ideas, even as ideas, are incomplete and tentative until they are employed in application to objects in action and are thus developed, corrected, and tested. The need of a laboratory was indicated. John Dewey, when called to be the head of the department in 1894, had arrived at certain philosophical and psychological ideas which he desired to test in practical application. In consequence, it was labeled as the Laboratory School (Mayhew & Edwards, 1966).

In September 2013, Lab opened Earl Shapiro Hall on its new Early Childhood Campus located at 5800 S. Stony Island Avenue. This new building, designed by Valerio Dewalt Train and FGM Architects, is home to approximately 625 children in nursery through second grade. The building is named for Earl Shapiro, who graduated from Lab in 1956.

The main entrance to the Lab Schools at Blaine Hall

U-High offers more than 150 different classes. All are college preparatory in nature and there are 22 Advanced Placement or Advanced Topic courses. High school students may also take classes at the University of Chicago at no extra charge, and about 20 do so each year. The average composite ACT score is 31.5. [7] The school maintains four separate libraries [8] which collectively hold over 110,000 volumes.

High school students may choose from 40+ different clubs and activities. The high school math, science, and Model UN teams are regular contenders for – and winners of – state titles. The school's newspaper (The Midway) and the yearbook (U-Highlights) regularly win regional and national awards, as does its arts magazine, Renaissance. Other popular activities include theater, ethnic clubs, Student Council, policy debate, and Model UN. The Model UN team is consistently ranked among the top in the nation, and is world-renowned for its competitive excellence. [9] In 2011, it was ranked the #2 High School Model UN team in the United States. [10] In 2018, Lab's Model UN team won the Best Large Delegation award at the Harvard Model UN conference. In addition, the Debate Team has won numerous national circuit tournaments, and is unofficially considered to be in the Top 20 nationwide.[ by whom?] Furthermore, U-High's Math and Science teams consistently win and place at Regional and State competitions, respectively.

Organized by the Office of Alumni Relations Development, members of the student body at U-High are nominated by faculty to serve in the Maroon Key Society. The Maroon Key Society serve as [11] ambassadors for the school, and they help provide tours to visiting alumni, potential students, and other guests to the school.

The school's athletic teams, the Maroons, compete in the Independent School League (ISL) and are members of the Illinois High School Association (IHSA). The middle school fields 15 teams in baseball, basketball, cross country, soccer, track, and girls volleyball. The high school has more than 25 teams: baseball, basketball, cross country, fencing, golf, squash, sailing, soccer, swimming, tennis, indoor and outdoor track & field, and girls volleyball. All operate with a "no cut policy," meaning any student who wishes to participate may, and nearly 65% of U-Highers participate on at least one team.

The high school's extracurricular activities occasionally make national and international news. For example, in 1990 then-Governor Thompson declared a " Matthew Headrick Day" [12] [13] and the US House made a proclamation [12] when then-student Headrick appeared on talk shows including Today [12] [14] after winning the Westinghouse. [15] [16] In response to the award, the Chicago Tribune wrote: "this ... is a ... school where being on the math team ... can actually enhance one's social status." [17] The Tribune's coverage was controversial because, as noted previously, U-High's extracurricular activities, including the math team, operate on a "no cut policy," and therefore participation was unlikely to confer social status. The faculty responded by posting a banner that humorously read: "The Few. The Proud. The U-High Math Team. Conferring social status since 1990." [18] 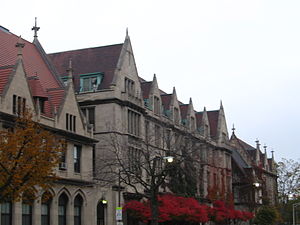 Here are a few of the teachers who have worked at Lab:

Lab classrooms are visited by teachers and administrators who wish to experience the way Lab teachers integrate Dewey’s philosophy into their classroom experience.