University of California, Hastings College of the Law

From Wikipedia, the free encyclopedia
Not to be confused with Hastings College.

Hastings has a unique relationship with the University of California that arose from a series of errors during its founding.

In 1878, Serranus Clinton Hastings gave $100,000 to be used to create the law school that now bears his name. He arranged for the enactment of a legislative act on March 26, 1878 to create the Hastings College of the Law as a separate legal entity affiliated with the University of California. [3] This was apparently intended for compatibility with Section 8 of the University's Organic Act, which authorized the Board of Regents to affiliate with independent self-sustaining professional colleges. [3] [4] Another reason for making the gift in this fashion was that Hastings desired to impose certain conditions on his gift, while "policy and law dictated that a free-gift could not be hedged by power of reversion." [5]

According to Hastings' official centennial history, its founder, "whether from arrogance, oversight, ignorance, or a combination of all three, was the author of his own troubles." [6] Although the founder had selected the original Hastings board of directors from among his professional acquaintances, he failed to adequately verify their concurrence with his views that a proper legal education must include a course in legal ethics and must also be hybridized with elements of a liberal arts education. [7] To his horror, it turned out they all believed that the only purpose of a law school was to provide vocational education in how to practice law. [8] This latter view was shared by the first professor hired, John Norton Pomeroy, who personally taught the vast majority of courses during Hastings' early years. [8] The founder hoped to educate cultured intellectuals who also happened to be lawyers; the board simply wanted to produce lawyers. [8] It was impossible to reconcile these fundamentally different visions, and by September 1882, Serranus Clinton Hastings had become estranged from his own handpicked board. [9] By that point in time, he had come to see the Board of Regents as a superior vehicle for infusing liberal arts and legal ethics into his law school, and in March 1883 arranged for another legislative act that purported to transfer the Hastings College of the Law directly to the University of California and vested responsibility for its governance in the Regents. [10] This was in facial conflict with the "affiliate" language in Section 8 of the Organic Act, so in February 1885, another act was passed to create a pro forma board of trustees for the sole purpose of holding the Hastings assets at arm’s length from the Regents. [5]

In deference to the 1883 act, the Hastings board of directors ceased to meet. [11] But because the Regents chose to remain neutral in the long-simmering dispute between board and founder (and did not attempt to exercise any control under the 1883 or 1885 acts), the Hastings College of the Law went through a strange period from September 1882 to April 1885 where it operated with no actual supervision from any governing board. [11]

On April 25, 1885, the Hastings board of directors convened to appoint Perrie Kewen as the new registrar, because the previous registrar had died. [12] At the request of Serranus Clinton Hastings, Attorney General Edward C. Marshall challenged Kewen's appointment by initiating a proceeding for a writ of quo warranto in San Francisco County Superior Court. [12] On March 30, 1886, in what became known as Kewen's Case, the Supreme Court of California upheld Kewen’s appointment by declaring the 1883 and 1885 acts to be unconstitutional on the basis of a provision of the 1879 state constitution guaranteeing the legislative independence of the University of California. [13] [14] In other words, the 1879 ratification of the state's second constitution (which remains in effect today) effectively stripped the California State Legislature of the power to amend preexisting statutes governing the University of California, including the 1878 act. [13] This was the last time that Serranus Clinton Hastings would try to shape the future of the law school that he had founded; Hastings has maintained its hard-fought independence from the Regents ever since. [13] The irony of Kewen's Case is that a constitutional provision intended to protect the University of California was applied in such a way as to prevent the University from achieving integration with its first law school. [13]

In contrast, the "Affiliated Colleges"—the medical, dental, nursing, and pharmacy schools in San Francisco—were affiliated with UC through written agreements, and not statutes invested with constitutional importance by court decisions. [15] In the early 20th century, the Affiliated Colleges agreed to submit to the Regents' governance at the urging of President Benjamin Ide Wheeler, who had come to recognize the problems inherent in the existence of independent entities that shared the UC brand but over which UC had no real control. [15] While Hastings remained independent, the Affiliated Colleges were able to integrate with one another under the supervision of the UC President and Regents, and evolved into the health sciences campus known today as the University of California, San Francisco. [15]

In 1900, Hastings became one of 27 charter members of the Association of American Law Schools (AALS). [16]

Hastings College of the Law was for many years considered the primary law school of the University of California with the purpose of preparing lawyers for the practice of law in the state, whereas the Department of Legal Jurisprudence on the Berkeley campus, which later became Boalt Hall School of Law (now styled Berkeley Law), was intended for the study of law as an academic discipline.

In the 1960s, Hastings began the "65 Club," the practice of hiring faculty who had been forced into mandatory retirement at age 65 from Ivy League and other élite institutions. [17] After the passage of age discrimination laws, however, the "65 Club" slowly phased out, and Hastings hired its last "65 Club" professor in 1998. In the mid-1950s, Newsweek published a story where then Harvard Law School dean and jurist Roscoe Pound declared, referring to UC Hastings: "Indeed, on the whole, I am inclined to think you have the strongest law faculty in the nation." [18]

100 McAllister Street, view from the west, off Golden Gate Avenue.

The campus is within walking distance of the Muni Metro and Bay Area Rapid Transit Civic Center/UN Plaza station. UC Hastings is commonly but affectionately derided by students and alumni as being located in the ugliest corner of the most beautiful city in the world. Indeed, the school has been referred to in jest as "UC Tenderloin." [21] 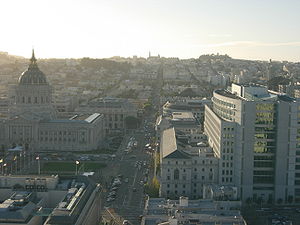 View west from the 24th floor James Edgar Hervey Skyroom at 100 McAllister Street. Visible buildings include San Francisco City Hall with its prominent dome, the city's Asian Art Museum of San Francisco at the left foreground and the Supreme Court of California on the right.

Located within a two-block radius of the campus is the United States Court of Appeals for the Ninth Circuit, the United States District Court for the Northern District of California, the California Supreme Court, the California Court of Appeal for the First District, San Francisco Superior Court, San Francisco City Hall, United Nations Plaza (and Federal Building Annex), the Asian Art Museum of San Francisco, and the Main Library of the San Francisco Public Library system. The heavy concentration of public buildings within the Civic Center, as well as the high crime rate, result in heavy police presence, and high security, around UC Hastings.

UC Hastings' detachment from the UC Regents gives it a broad degree of independence in shaping educational and fiscal policies; however, due to a shrinking California education budget, Hastings must also compete for limited educational funds against its fellow UC campuses. Despite the apparent competition among the UC law schools, Hastings was able to maintain its traditionally high standards without having to decrease class size or raise tuition to higher levels than fellow UC law schools, until the California budget crisis in June 2009, first raised the possibility of slashing $10 million in state funding.

Under California law, if the government ever cuts funding to Hastings to below the 19th-century figure of $7,000 a year, the state must return the $100,000, plus interest, to the Hastings family. [23] State Sen. Mark Leno (D-San Francisco) has argued that the rejected $10 million budget cut, in abandoning state financial support for the school, would have allowed the Hastings family to launch an expensive court fight to reclaim the $100,000 plus hefty interest. [24] 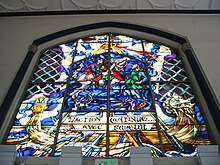 The Battle of Hastings (1066) as depicted on a stained glass window over the main entrance of 100 McAllister Street.

Hastings participates in the Concurrent Degree Program with U.C. Berkeley's Haas Graduate School of Business. Upon completion of a four-year program, the student earns a Berkeley M.B.A. degree and a J.D. degree from UC Hastings College of the Law. [26]

UC Hastings College of the Law and the UCSF School of Medicine of the University of California, San Francisco have commenced a joint degree program, and in 2011 began enrolling their first class of graduate students in the Master of Studies in Law (MSL) and LL.M. in Law, Science and Health Policy programs. Students have coursework available at each institution for fulfillment of the degrees. [27] This program is a component of the UCSF/UC Hastings Consortium on Law, Science and Health Policy.

UC Hastings has a chapter of the Order of the Coif, a national law school honorary society founded for the purposes of encouraging legal scholarship and advancing the ethical standards of the legal profession. [28] It joined the Association of American Law Schools (AALS) as a charter member in 1900; it renewed its membership in 1949. [29]

The total cost of attendance (indicating the cost of tuition, fees, and living expenses) at UC Hastings for the 2018–2019 academic year is $49,538 for California residents and $55,538 for non-residents. [30] The Law School Transparency estimated debt-financed cost of attendance for three years is $296,028. [31] UC Hastings does not offer full-tuition scholarships. [32]

According to UC Hastings official 2018 ABA-required disclosures, 64.3% of the Class of 2018 obtained full-time, long-term, JD-required employment nine months after graduation, excluding solo-practitioners. [33] UC Hastings Law School Transparency under-employment score is 20.6%, indicating the percentage of the Class of 2019 unemployed, pursuing an additional degree, or working in a non-professional, short-term, or part-time job nine months after graduation. [34]

U.S. News & World Report ranks Hastings 59th among top law schools in the US and as the most diverse of the five law schools in the UC system. [1] [36] It was listed with a "B+" in the March 2011 "Diversity Honor Roll" by The National Jurist: The Magazine for Law Students. [37] UC Hastings also has the largest student body and student/faculty ratio of the UC law schools. [38]

In January 2011, UC Hastings was given a "B" in the "Best Public Interest Law Schools" listing by The National Jurist: The Magazine for Law Students. [39]

In 2009, Super Lawyers magazine ranked UC Hastings 11th in terms of law schools that produced the most "Super Lawyers". [40]

According to the Web site "Law School Advocacy," UC Hastings had the No. 1 Moot Court program in the country in 2011, with Top 5 rankings in each of the last five years. [43]

For the July 2019 California Bar Examination, 80% of Hastings Law graduates taking the exam for the first time passed. [45]

The O'Brien Center at UC Hastings has published several books: [48]

Main article: List of University of California, Hastings College of the Law people