The Combat Capabilities Development Command, (CCDC) (formerly the United States Army Research, Development, and Engineering Command (RDECOM)) is a subordinate command of the U.S. Army Futures Command. RDECOM was tasked with "creating, integrating, and delivering technology-enabled solutions" to the U.S. Army. Headquartered at Aberdeen Proving Ground in Maryland, RDECOM employed more than 13,000 scientists, engineers, researchers, and support personnel working at six major RDE centers and at the U.S. Army Research Laboratory, providing nearly all of the Army's basic and applied research and development services, including in collaboration with other branches of the armed forces and through a network of more than a thousand academic, industrial, and international partners.

Speed of delivery and integration with the weapon systems are now needed for CCDC operations. [6] CCDC now includes the Data and Analysis Center (formerly AMSAA), [6] and must now align with the top six priorities of Futures Command:

CCDC formerly described its role as "the Army's enabling command in the development and delivery of capabilities that empower, unburden and protect the Warfighter." [7] It conducts and sponsors scientific research in areas important to the Army, develops scientific discoveries into new technologies, engineers technologies into new equipment and capabilities, and works with the U.S. Army Training and Doctrine Command to help requirements writers define the future needs of the Army. [8]

After assuming command of the Army Materiel Command in October 2001, General Paul J. Kern saw the need to streamline how the Army developed technology. At the time, the Army's laboratories and research centers reported through multiple channels, among other problems. Kern argued that the Army had to "figure out how to get technology in the hands of the Warfighters quicker" and that it was "the impression of everyone out there that the laboratories take too long, they do science for science's sake, engineering for engineering's sake". Kern proposed to unite the laboratories and research centers under a single command, and the idea was initiated to senior commanders and civilians. [10] The new command was approved, and was provisionally stood up in October 2002, based at Aberdeen Proving Ground where it replaced and integrated the headquarters element of the Soldier and Biological Chemical Command (SBCCOM). In June 2003, RDECOM assumed operational control of the RDE centers. An organizational ceremony took place in October 2003 at Aberdeen Proving Ground, where SBCCOM officially stood down and the 389th Army Band and the Army Material Command's Acquisition Center were assigned to RDECOM. RDECOM became a major subordinate command of the Army Material Command in March 2004, with over 17,000 military, civilian, and contractor personnel at the time. In 2006, the 389th Army Band was designated AMC Band and moved to Redstone Arsenal, Alabama. In 2008, the AMC Acquisition Center became part of the new Army Contracting Command, itself a major subordinate of the AMC. From February 2012 to September 2014, RDECOM was led by a civilian commander, Dale Ormond, before returning to military command. 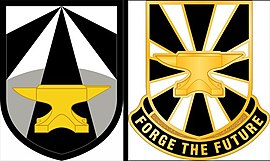 As of 2018, CCDC reports to Army Futures Command, which will reach full operational capability by August 2019. The new command is focused on readiness for future combat with near-peer competitors, in a shift away from the unconventional, asymmetric warfare fought in various theaters since 2001.

On 4 June 2018, the Headquarters, Department of the Army published General Order 2018-10, "Establishment of the United States Army Futures Command," formally transferring RDECOM from AMC to the new command effective 1 July 2018. [11] The transition of authority from AMC to AFC took place at Aberdeen Proving Ground, MD on 31 January 2019, with a reflagging of the Command and repatching of the commander and CSM. [6]

This article incorporates  public domain material from websites or documents of the United States Army.