Ukiah ( /juːˈkaɪə/ yoo-KY-ə; formerly Ukiah City) [9] is the county seat and largest city of Mendocino County, California. With its accessible location (along the U.S. Route 101 corridor several miles south of CA 20), Ukiah serves as the city center for Mendocino County and much of neighboring Lake County.

The Yokayo band of Pomo people who inhabited the Russian River valley from the pre-Columbian era are today an unrecognized tribe in the United States.

Ukiah is located within Rancho Yokaya, one of several Spanish colonial land grants in what was then called " Alta California". The Yokaya grant, which covered the majority of the Ukiah valley, was named for the Pomo word meaning "deep valley." [10] The Pomo are the indigenous people who occupied the area at the time of Spanish colonization. This word was also the basis for the city name, as Ukiah was an anglicized form of Yokaya. [11]

The first Anglo settler in the Ukiah area was John Parker, a vaquero who worked for pioneer cattleman James Black. [12] Black had driven his stock up the Russian River valley and took possession of a block of grazing land at that locale; a crude block house was constructed to house Parker in order to protect him and the herd from the hostile indigenous local population. [12] This block house was located just south of present-day Ukiah on the banks of what was known as Wilson Creek. [12]

The next Anglo settler was a man named Samuel Lowry, who in 1856 constructed a log cabin approximately on the corner of today's East Perkins Street and North Main Street. [12] Lowery sold his claim to A.T. Perkins in the spring of 1857, and the latter moved his family into the valley, thereby becoming the first pioneer family of the township. [12] Six others followed to make their home in the community that same year. [12] The first United States post office opened in 1858. [9] By 1859 the population of Ukiah had grown to about 100 people, making it a community sufficient in size to serve as the county seat. Before this, administrative duties for Mendocino County had been handled by Sonoma County. [13]

The town was initially reachable only by stagecoach, with a short rail line from San Francisco terminating in Petaluma, nearly 80 miles to the south, necessitating a horse-drawn trip taking two full days as late as 1870. [14] In subsequent years the rail line was extended further northward to Cloverdale, reducing the stagecoach trip to 30 miles — still enough to maintain the community's relative isolation and to fetter growth. [14]

Ukiah was finally incorporated in 1876. [9] It was not until 1889 that the San Francisco and North Pacific Railroad completed its line from Cloverdale to Ukiah, linking the Mendocino County seat to the national rail network at last. [15]

An agricultural and business community, over the decades various crops have been grown in the Ukiah Valley. They include pears, green beans, hops, apricots, and grapes. As part of the famous California Wine Country (California), grapes have become the predominant agricultural product.

Hops were once a predominant crop grown around Ukiah. The beer flavoring agent was first grown there in 1868 when L.F. Long of Largo grew an initial experimental crop. [14] The climate proved suitable for the crop and production expanded, peaking in 1885, before faltering somewhat in the last years of the 1880s due to declining prices. [14] Mendocino County remained the third-largest producer of hops in the state of California in 1890, with well over 900 acres under cultivation, [16] and production continued well into the 20th century. A refurbished hop kiln can be seen at the north end of Ukiah east of Highway 101, where many of the old fields were located.

Ukiah's 20th-century population developed in relation to the lumber boom of the late 1940s, with the logging of redwood once being a major industry.[ citation needed] 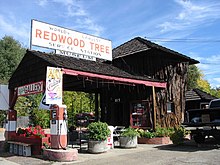 The "World's Largest Redwood Tree Service Station" in Ukiah is built largely from a massive section of Sequoia.

As a community, Ukiah has roughly twice the number of people (including Redwood Valley, Potter Valley, Calpella, and Talmage) as the census reports. During the business day, an average of 40,000 people work inside the city limits, or in the business and residential neighborhoods to the north and south.

Major employers in Ukiah include: [24]

Ukiah is known for wine production. The Ukiah vicinity is now home to some very large production wineries, including Brutocao, Fife, Parducci, Frey, and Bonterra. Ukiah vintners are known for innovating with organic and sustainable practices.

Ukiah was previously a major producer of pears. Alex R. Thomas & Company owned hundreds of acres of Bartlett pear orchards on the east side of the Ukiah Valley. For nearly 90 years, many local residents and migrant workers have been employed packing the pears for domestic and foreign consumption. On December 1, 2008, the company announced it would be shutting down major operations at the end of the year due to bankruptcy. [25] Several acres of orchard have been torn down and replaced with vineyards since the packing shed closed its doors. As of 2011, the main facility was slated to reopen as a composting and trash-sorting facility. [25]

Additionally, Ukiah has become home to four marijuana dispensaries, as a large town part of the Emerald Triangle. Cannabis is a large export from the surrounding areas. 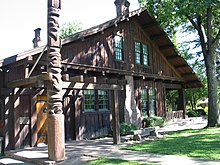 Grace Hudson's Sun House, designed by Grace and John Hudson circa 1911 in the Craftsman style

Institutions of the arts include:

Ukiah uses a council–manager form of government in which policy is set by a five-member city council, elected at-large to four-year terms. The council appoints both the mayor and the city manager. [26]

In the United States House of Representatives, Ukiah is in California's 2nd congressional district, represented by Democrat Jared Huffman. [32]

The tribal headquarters of both the Pinoleville Pomo Nation and the Potter Valley Tribe are in Ukiah. [33] 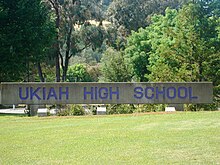