From Wikipedia, the free encyclopedia
(Redirected from U.S. Route 92 in Florida)

US 92 begins along State Road 687 at the intersection of SR 595 in St. Petersburg. The road continues north along SR 687 until it reaches the eastern termini of State Road 686 and State Road 694, where it turns right on Gandy Boulevard ( State Road 600) before crossing the Gandy Bridge into Tampa.

After crossing the Gandy Bridge, US 92 intersects West Shore Boulevard and runs east along Gandy Boulevard until it reaches Dale Mabry Highway at the first interchange with the Lee Roy Selmon Expressway where it turns north. State Road 685 branches to the northeast at Henderson Boulevard. The next major intersections are Kennedy Boulevard ( SR 60), then Interstate 275 at Exits 41 A. In between SR 616 and SR 574, US 92 passes George M. Steinbrenner Field and Raymond James Stadium. A parclo interchange with Hillsborough Avenue takes US 92 from Dale Mabry to Hillsborough Avenue and State Road 580 from Hillsborough Avenue to Dale Mabry Highway. US 92 crosses two parallel bridges over the Hillsborough River, then intersects with BUS US 41, I-275 again at Exits 47 A-B, then intersects northbound U.S. Route 41 and SR 45, where US 41 and 92 overlap each other. One other major intersection exists with SR 585 before US 41 turns southbound as the concurrency ends. After SR 583, the road becomes part of the collective-distributor roads along Interstate 4 west and east of the parclo interchange with U.S. Route 301. The east end of the interchange contains a stub for a proposed west-to-northbound ramp to 301 at the westbound flyover. Access to Interstate 75 is only available eastbound from I-4. Three other local roads that cross US 92 access I-4 before State Roads 566, 39A (Alexander Road), 39, 574, and 533 in Plant City. 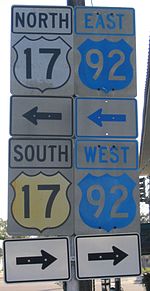 Older US 17/92 shields in Lake Alfred

US 92 and U.S. Highway 17 join at the south end of Lake Alfred in Polk County. State Road 600 carries US 92 from Auburndale, while State Road 555 takes US 17 from the south via Winter Haven. County Road 555 soon splits to the north along the old road through Lake Alfred, while US 17/92 runs one block east on Lake Shore Way. County Road 557 begins at Haines Boulevard, where it heads west for a block to CR 555, and then turns north towards Interstate 4; just past CR 557, US 17/92 turns east towards Haines City. It enters downtown Haines City on Hinson Avenue after crossing under U.S. Highway 27 at a cloverleaf, meeting the north end of State Road 17 before turning north on 17th Street. It soon meets County Road 580, which runs east to Poinciana. In Davenport, US 92 meets County Road 547, which heads west to U.S. Highway 27 and north along old US 17/92. US 92 then intersects with Ronald Reagan Parkway ( County Road 54) at Loughman.

After crossing into Osceola County, US 92 picks up the Orange Blossom Trail name. Orange Blossom Trail (OBT) takes US 92 east and north through Kissimmee and into Orlando. The OBT name temporarily ends at Pleasant Hill Road (former State Road 531) in southern Kissimmee, where US 92 uses John Young Parkway (formerly Bermuda Avenue) to Vine Street ( U.S. Highway 192/ SR 530). (US 92 ran through downtown Kissimmee on Emmett Street, Broadway and Main Street until ca. 2000.) It turns east there on US 192, turning north at Main Street, which becomes OBT at the north city limits. U.S. Highway 441 (along with State Road 500) joins US 92 at US 192 - thus OBT carries US 17, US 92 and US 441, as well as unsigned SR 500 and SR 600, from Kissimmee to Orlando. Along this stretch, the road intersects the Osceola Parkway in Kissimmee, SR 417 (Central Florida GreeneWay) at exit 11, and the Central Florida Parkway as it passes east of the resort area of Orlando that includes Walt Disney World and affiliated resorts, Sea World, and Universal Studios. The OBT then comes to a massive combined interchange with Florida's Turnpike and SR 528 (Beachline Expressway) in Sky Lake. North of this interchange, the road passes west of The Florida Mall and intersects SR 482.

The road reaches an interchange with I-4 in Holden Heights. The OBT continues into Orlando and comes to a diamond interchange with SR 408 (East-West Tollway) at exit 9. Orange Blossom Trail bypasses downtown Orlando to the west, meeting State Road 50 ( Colonial Drive) northwest of downtown. At SR 50, US 92 turns east, while US 441 continues northwest on OBT towards Apopka. US 92, concurrent with SR 50 (and SR 600), meets the south end of Edgewater Drive and crosses Interstate 4 ( SR 400) and State Road 527 ( Orange Avenue and Magnolia Avenue) before meeting Mills Avenue ( State Road 15), where US 92 turns north.

Mills Avenue carries State Road 15 on both sides of State Road 50, but is only signed as such to the south, as, north of SR 50, it carries US 92 (and unsigned SR 600). It crosses Lake Estelle on the Andrews Causeway before reaching the border between Orlando and Winter Park.

In Seminole County, US 92 is a main commercial strip as it heads through Casselberry (where it crosses State Road 436 - Semoran Boulevard at an interchange) and Longwood (where it crosses State Road 434). North of Longwood it meets the north end of State Road 419 and crosses County Road 427 (the old alignment). Lake Mary Boulevard, Airport Boulevard and State Road 417 cross US 92 in southern Sanford, and it meets the west end of County Road 427A. At 25th Street, southwest of downtown Sanford, State Road 46 comes in from the east and turns north for a concurrency near downtown; County Road 46A heads west on 25th Street. 13th Street marks the west end of County Road 415, and at 1st Street the triple concurrency turns west. Before leaving the Sanford City Limits, the routes run over a bridge for a railroad line near the Sanford Amtrak Auto Train station, as well as the nearby SunRail station. The routes leave the concurrency with SR 46 at the north end of County Road 15 (once a branch of State Road 15), and then runs north towards the interchange with Interstate 4 ( SR 400) where US 17/92 turns west along the south shore of Lake Monroe (part of the St. Johns River). Just before crossing the river into Volusia County at the west end of the lake, which runs unsigned with SR 15 and SR 600 here) and crosses under at the end of its own bridge across the river (the St. Johns River Veterans Memorial Bridge).

A sign for U.S. Route 92 on Ridgewood Ave. in Daytona Beach

After crossing the St. Johns River via the Lake Monroe Bridge, US 92 continues north into Volusia County, meeting the west ends of County Road 4162 (in DeBary), County Road 4146, and County Road 4145 (in Orange City). North of Orange City is a trumpet interchange with State Road 472, a four-lane connection to Interstate 4. US 92 then crosses County Road 4116 and meets the south end of State Road 15A, a western bypass of DeLand. US 92 passes through downtown DeLand on Woodland Boulevard, crossing State Road 44 at New York Avenue. The intersection of US 92 and SR 44 does not allow any turns — right or left — and so adjacent city streets are marked for those turns. In northern DeLand, U.S. Highway 92 ( SR 600) splits to the east on International Speedway Boulevard, while U.S. Highway 17 ( SR 15) continues north. To the west of the split, International Speedway Boulevard is County Road 92, a short connection to State Road 15A that allows traffic on US 92 to bypass downtown DeLand. SR 15A itself rejoins US 17 north of DeLand. From DeLand to its terminus in Daytona Beach, US 92 carries the local name, International Speedway Boulevard, as the highway passes by the Daytona International Speedway. US 92 passes by other landmarks such as Daytona Beach International Airport and Volusia Mall. US 92 spans the Halifax River and Intracoastal Waterway via the Broadway Bridge before reaching its eastern terminus at SR A1A.

US 92 was in the original 1926 plan, connecting Tampa (concurrent with US 41) to US 1 in Daytona Beach. It had been the Dixie Highway Tampa-St. Petersburg Loop from Plant City to Haines City, the West Mainline from Haines City to Orlando, and the East Florida Connector from Orlando to DeLand.

When the bypass of downtown Tampa on SR 17 (Hillsborough Avenue) opened in the early 1930s, US 92 and US 41 were rerouted to use it. US 92 turned south from the new road where US 41 turned north, at Nebraska Avenue (former SR 5, probably then a spur of SR 5), and continued to end in downtown Tampa.

In 1947, the route was extended east in Daytona Beach across the Intracoastal Waterway and the Halifax River after the Broadway Bridge was reconstructed and opened.

Until 1999, 92 ran through downtown Kissimmee on Emmett Street, Broadway and Main Street, along with US 17.

U.S. Business Route 92 in Lakeland, Florida was a 4.2 miles (6.8 km) business route designed to keep trucks from entering Downtown Lakeland that followed State Road 600 between 1961 and 1998. The route began where US 92 turned north onto SR 517. It runs along George Jenkins Boulevard, then makes a sharp southeast turn along Sloan Avenue, while George Jenkins Boulevard becomes SR 548. Sloan Avenue becomes a divided highway between the 12-foot-6-inch (3.81 m) bridge beneath the CSX line, only to emerge at the intersection of West Main Street where it turns east. The road's major intersections include a partial interchange with SR 563, and then SR 37, where West Main Street becomes East Main Street. The road makes a brief left turn onto Massachusetts Avenue in front of Lake Mirror for one block, then turns right at the end of Cedar Street where it runs along the north shore of Lake Mirror passing by Lakeland Amtrak Station. East Main makes a sharp right turn to the south before the intersection of Rose Street, then turns east again at the intersection of East Lake Street. From there it has an intersection with US 98( SR 548), and after Lake Parker Avenue makes a north turn onto Tyler Road. The road crosses under the CSX line again, this time beneath a 13-foot-6-inch (4.11 m) two-lane undivided bridge, and then curves onto East Gary Road, where it runs east until finally ending at US 92 along the south shore of Lake Parker. FDOT maps still show US Bus 92 as an existing route. [5]