U.S. Route 64 (US 64) is a U.S. Highway in the American states of Arizona and New Mexico. US 64 runs from the Four Corners area in Arizona to the east coast of North Carolina. In Arizona, the highway starts at U.S. Route 160 (US 160) heading southeast for 4.5 miles (7.2 km) before entering New Mexico near the town of Beclabito. Through New Mexico the highway passes through Shiprock, Bloomfield, Tierra Amarilla and Tres Piedras, sharing a short concurrency with I-25 near Raton, before heading east through Clayton to the Oklahoma state line. 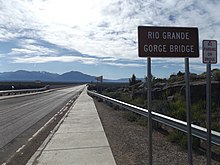 Entering from Arizona, US 64 continues into the town of Beclabito, traveling to Shiprock. There US 64 makes a concurrency with US 491 for 0.5 miles (0.80 km). US 64 continues east into the city of Farmington, where it is multiplexed with unsigned State Road 5001 between junctions with US 64 Business. Then it passes through Bloomfield, followed by the towns of Blanco and Navajo City. After entering the Rocky Mountains, US 64 has a concurrency with US 84 from Chromo Mountain to Tierra Amarilla.

The highway then passes through Tres Piedras before crossing via the Rio Grande Gorge Bridge and heading into Taos. US 64 continues through the towns of Eagle Nest and Cimarron before eventually reaching I-25. The two highways bring up a short concurrency before US 64 turns northwest off of I-25 in Raton, then continuing to travel east, this time bringing up a concurrency with US 87 through the towns of Capulin, Des Moines, Grenville, and Mount Dora. The two highways split in Clayton, and US 64 forms another new concurrency with US 56 and US 412. The three highways barely touch the Texas Panhandle before continuing into Oklahoma. [4]

Several plans involve safety improvements in US 64 at its intersection with NM 68. [10]