From Wikipedia, the free encyclopedia
(Redirected from U.S. Route 180 in Arizona)
Numbered Highway in the United States
For the former route, see U.S. Route 180 (1926).

U.S. Route 180 is an east–west United States highway. Like many three-digit routes, US 180 no longer meets its "parent", US 80. US 80 was decommissioned west of Mesquite, Texas, and was replaced in Texas by Interstate 20 and Interstate 10 resulting in U.S. 180 being longer than U.S. 80. The highway's eastern terminus is in Hudson Oaks, Texas (west of Fort Worth, near Weatherford), at an intersection with Interstate 20. Its western terminus is unclear. Signage at an intersection with State Route 64 in Valle, Arizona 40 miles (64 km) northwest of Flagstaff indicates that the route ends at SR 64, which is consistent with the AASHTO U.S. Highway logs. However, many maps continue the US 180 designation to the south rim of the Grand Canyon at Grand Canyon Village. Signage at the SR 64 intersection as late as 2011 indicated that US 180 continues north concurrent with the route. However, no signage along the route exists past this intersection until SR 64 turns east towards Cameron, Arizona. At this intersection, signage makes no mention of US 180 nor is there any mention at the terminus of SR 64 at US 89. The western terminus of the I-40 Bus./US 180 concurrency in Flagstaff, Arizona

US 180 shares numbering with Interstate 40 from Flagstaff, Arizona, to Holbrook, Arizona. At Holbrook, US 180 follows Interstate 40 Business along South Navajo Boulevard. Shortly after following South Navajo Boulevard, however, US 180 follows a south-southeast route, running by the Petrified Forest National Park and continuing South-Southeast to and through a small branch of the Zuni Indian Reservation, to St. Johns, Apache County, Arizona where it meets U.S. Route 191. After meeting up with US 191, US 180 continues south to the town of Eagar, Arizona where the two routes enter the Apache National Forest and finally split at the town of Alpine, Arizona, roughly 4–6 miles from the Arizona-New Mexico border.

View of the Mogollon Mountains from Leopold Vista between Alpine and Silver City.

After entering New Mexico from just east of Alpine, Arizona, US 180 continues south until Silver City, New Mexico. From Silver City, US 180 travels just east for roughly 4–6 miles, meeting up with New Mexico State Road 90, New Mexico State Road 15, and New Mexico State Road 152. US 180 now travels southeast for roughly 50 miles (80 km) to Deming, New Mexico, where US 180 meets up with Interstate 10. From Deming, US 180 follows Interstate 10 through Las Cruces, New Mexico, and enters Texas at Anthony, New Mexico. The route is concurrent with Interstate 10 through the west and central portions of El Paso, Texas, and separates from I-10 at Paisano Drive, joining U.S. Route 62. US 62/180 is concurrent with Montana Avenue in East Central El Paso (after the intersection with Paisano Drive), and continues to be called Montana Avenue until it reaches RM 2775 (Hueco Tanks Road). US 62/180 then travels east, going past the spur RM 2775 (which goes north to Hueco Tanks) through the southern end of the Guadalupe Mountains National Park (90 miles east of El Paso), and past the southern face of Guadalupe Peak (the highest point in Texas) towards New Mexico and Carlsbad Caverns National Park. Continuing though Carlsbad, New Mexico, US 180 and US 62 travels toward Texas running through Hobbs, New Mexico, and exiting New Mexico just east of Hobbs. US 180 is now a divided highway west of Carlsbad where it used to be a two-lane highway until around 2008. US 180 is a divided highway in the entire state whereas before it was divided only east of Carlsbad. Speed limit was 65, now 70 west and 70 east of Carlsbad to about 15 miles west of Hobbs. 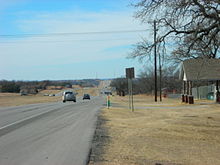 US 180 west of Weatherford, Texas 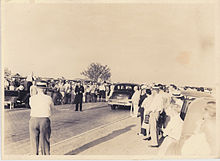 Dedication ceremony of brick-paved roadway between Mineral Wells, Texas, and Weatherford, Texas, in 1936. This stretch was designated as part of US 80 at the time.

After re-entering Texas from just east of Hobbs, New Mexico, US 180 splits from US 62 at Seminole, Texas. US 180 continues eastward running through the towns of: Lamesa, Gail, Snyder, Roby, Anson, Albany, and Breckenridge. For the last portion of its length, the road runs through the scenic Palo Pinto Mountains, exiting them at Metcalf Gap. [2] Towns in this final portion include Palo Pinto, Mineral Wells and Cool.

US 180 comes into contact with Interstate 20 just east of Weatherford, Texas, and ends in Hudson Oaks, Texas.

The speed limit is 75 mph in Hudspeth and Culberson counties except through Guadalupe Pass. beginning just over 1/2 mile east of mile marker 52 to the state line at FM 652.

I-40 in Flagstaff. The highways travel concurrently to Holbrook.

US 191 in St. Johns. The highways travel concurrently to Alpine.

US 285 in Carlsbad. The highways travel concurrently through Carlsbad.
Texas

US 87 in Lamesa. The highways travel concurrently to south of Los Ybanez.

US 283 in Albany. The highways travel concurrently through Albany.

Arizona State Route 180A serves as an alternate spur of US 180 in eastern Arizona.