From Wikipedia, the free encyclopedia
(Redirected from U.S. Route 163 in Arizona)
Highway in Arizona and Utah
This article is about the current US 163. For the road designated as US 163 in the 1930s, see Iowa Highway 163.

U.S. Route 163 (also U.S. Highway 163, US 163) is a 64-mile (103 km) U.S. Highway that runs from US 160 northward to US 191 in the U.S. states of Arizona and Utah. The southernmost 44 miles (71 km) of its length are within the Navajo Nation. The highway forms part of the Trail of the Ancients, a National Scenic Byway. The highway cuts through the heart of Monument Valley and has been featured in numerous movies and commercials.

The highway was designated in 1970, replacing Arizona State Route 464 and Utah State Route 47 as well as a portion of the old alignment of US 160 in Utah. In 1981, US 191 was routed over the northern section of US 163, effectively truncating the northern terminus to Bluff, Utah, from Crescent Junction. The state of Utah briefly had plans for a different routing of US 163 north of Bluff. These plans were rejected, resulting in discrepancies between the signed route and the official designation by the American Association of State Highway and Transportation Officials that were not resolved until 2008. The route number does not follow the numbering convention for U.S. Highways, as the number 163 would normally be used for a spur of US 63; however, these two highways have never connected. US 163 near Monument Valley, Utah

The southern terminus of US 163 is located at a junction with US 160 south of Kayenta in Navajo County and Navajo Nation. The road continues to the south of this junction as Bureau of Indian Affairs (BIA) Route 591. US 163 heads north from US 160 to the west of the Kayenta Airport as it passes through the town of Kayenta. The highway curves towards the northeast in Kayenta before it curves back towards the north. As it continues towards the north, the highway goes through an s-curve, resulting in a northeasterly heading. US 163 continues this heading as it heads toward Monument Valley and crosses the border into Utah. [4] An 18-mile (29 km) stretch of the highway from approximately 5 miles (8 km) north of the US 160 junction to the Utah border has been designated as a scenic route by the state of Arizona. [5]

The Utah portion of the highway begins in Monument Valley, in San Juan County. Just after entering Utah the highway junctions with the Monument Valley Visitors center. The highway proceeds northeast until the town of Mexican Hat where the highway both crosses the San Juan River and exits the Navajo Nation. From Mexican Hat, the highway travels due east to towards its signed terminus in Bluff. Formerly, the route continued along what is now signed US 191 to I-70, however the portion north of Bluff was not signed after the creation of US 191 and was formally removed in 2008. [3] [6] The length of US 163 in Utah has been designated the Bluff to Monument Valley Scenic byway by the Utah State Legislature [7] and forms part of the Trail of the Ancients National Scenic Byway. [8] All highways in Utah are codified in law; US 163 is defined at Utah Code §72-4-122(3). [9]

US 163 seen towards northeast.

In 1970, US 163 was designated along SR 464 in Arizona and SR 47 in Utah as part of a re-alignment of U.S. highways in the Four Corners region. [1] With the re-alignment, US 160 was re-routed into Arizona instead of Utah. US 163 also absorbed the former route of US 160 to its former terminus at Interstate 70 at Crescent Junction. In 1981, AASHTO approved a new iteration of U.S. Route 191 that absorbed much of the alignment of US 163. [13] Utah truncated US 163 at Bluff. The truncation was made without approval from AASHTO, as the AASHTO logs placed the northern terminus of US 163 at I-70 at Crescent Junction. [13] 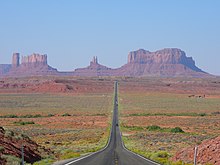 View of Monument Valley in Utah, looking south on US 163

The state of Utah signed a joint intent with the Navajo Nation and San Juan County in 1986 to construct a new highway to connect Bluff with Montezuma Creek. Businesses in Monument Valley asked the Utah Department of Transportation (UDOT) to request extensions of US 163 and US 666 using this new road. [14] The proposal would have US 163 run from Cedar City to US 160 near Cortez, Colorado along the routes of State Route 14, U.S. Route 89, Arizona State Route 98, U.S. Route 160, the current US 163, the new road from Bluff to Montezuma Creek, and Colorado State Highway 41. The proposal for US 666 would extend to Richfield via upgrades to State Route 95 and State Route 24. [14] UDOT submitted the proposal for US 666 to AASHTO, which was rejected. AASHTO cited that the route was not direct, and SR-24 was not built to U.S. Highway standards. [14] UDOT did not pursue the extension of US 163, even though the Utah state legislature had already approved the new road from Bluff to Montezuma creek as route 163. [13]

With this extension the Utah definition of US 163 conflicted with the AASHTO definition. UDOT resolved this discrepancy by signing the extended portion as State Route 163. In 2004, the plan to extend US 163 was abandoned, and the extension was renumbered SR-162 to "make the state route numbers run synonymous with the U.S. route designation." [13] Although the state changed the definition of US 163 back to match the national definition in 2004, the portion north of Bluff remained unsigned. [13] [15] In October 2008, UDOT requested and obtained approval to truncate US 163 to the junction with US 191 resolving the discrepancy. [6]