From Wikipedia, the free encyclopedia
(Redirected from Tucson (Amtrak station))
‹ The template Infobox station is being considered for merging. ›

Tucson is an Amtrak train depot in Tucson, Arizona, served three times a week by the Sunset Limited and Texas Eagle trains.

The depot was built in 1907 by the Southern Pacific Railroad (SP). It was designed by the SP's architect, Daniel J. Patterson, who designed a number of depots during the same era, including the San Antonio Station.

In 1998, the City purchased the entire depot property from the Union Pacific Railroad, which had absorbed the SP. [3] Restoration of the main depot building and the three adjacent buildings, to their 1941 modernized Spanish Colonial Revival architectural style, was completed in 2004. Spanish Colonial Revival elements include the stuccoed brick walls, red clay roof tiles, and colorful, decorative tilework in the waiting room. [3] The station and other railroad buildings are included as contributing resources to the National Register-listed Tucson Warehouse Historic District. [4]

The Old Pueblo Trolley extended their historic streetcar line to the depot in 2009. Sun Link assumed operation of the line on July 25, 2014. The Southern Arizona Transportation Museum is located in the old Records Vault building. [5] 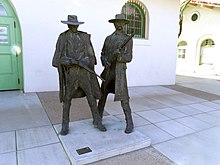 The Tucson Depot is where Frank Stilwell, suspected in the murder of Morgan Earp, was killed by Wyatt Earp in the company of Doc Holliday.

According to historian David Leighton, of the Arizona Daily Star, the Wyatt Earp and Doc Holliday statue near the train depot commemorates the revenge killing of Frank Stilwell. On March 18, 1882, in the aftermath of the Gunfight at the O.K. Corral, Morgan Earp was murdered by unknown killers, in Tombstone, Arizona. Two days later, Wyatt Earp, Doc Holliday, and a few other men were escorting the injured Virgil Earp and his wife to Tucson, with their final destination being California. While at the Tucson train station, Wyatt Earp learned that Frank Stilwell, one of the individuals suspected in the Morgan Earp murder, was lurking in the area. Earp, Holliday, and the others pursued Stilwell along the train tracks, eventually catching and killing him. [6]