From Wikipedia, the free encyclopedia
(Redirected from Transportation in New York)

Transportation in New York is made up of some of the most extensive and one of the oldest transportation infrastructures in the country. Engineering difficulties because of the terrain of New York State and the unique issues of New York City brought on by urban crowding have had to be overcome since the state was young. Population expansion of the state generally followed the path of the early waterways, first the Hudson River and then the Erie Canal. Today, railroad lines and the New York State Thruway follow the same general route. 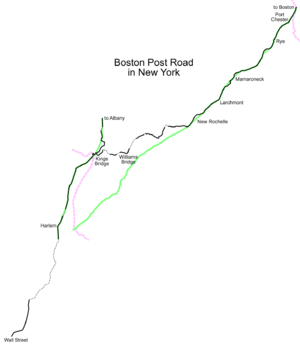 Transportation was used early on to support industry and commerce in New York State. The Boston Post Road, between what then the relatively small City of New York and Boston, began as a path to deliver the post using post riders (the first ride to lay out the Upper Post Road starting January 22, 1673), and developed into a wagon, or stage road in later colonial times. During the 19th century, pieces of the road were taken over and improved by turnpike companies. In the 1910s and 1920s, the Lower Post Road alignment (and realignments made to the route) was a National Auto Trail known as the Boston Post Road. Large sections of the various routes are still given the name Boston Post Road, much of it is now U.S. Route 1.

By the American Revolutionary War, the colonial Province of New York was still small and relatively sparsely populated. In the 1790 United States Census, the state had a population of 340,120, placing it behind Virginia (747,610), Pennsylvania (434,373), Massachusetts (378,787). [1] The state grew rapidly after this as New York City grew to become the country's shipping epicenter. On October 24, 1825, the Erie Canal opened and over the next century would make boom towns out of the Upstate cities of Buffalo, Rochester, Syracuse, Rome, Utica and Schenectady. Use of the canal would only decline after 1950. Cities in New York State would frequently show up as amongst the largest in the United States during the 19th, and into the early 20th century.

The other major contribution to New York's transportation system was its extensive railroad network. The New York Central Water Level Route was advertised as the world's first four-track railroad, and connected New York City, Buffalo, and the cities in between.

Early transportation in New York State was primarily by rivers and canals. Today, the canals are primarily used for recreation.

One of the most famous urban mass transit systems in the world is the New York City Subway. New York City is also served by Port Authority Trans-Hudson (PATH), and an extensive bus system.

Besides New York City, many of the other cities have mass transit systems.

Rochester had a subway system, although it is mostly destroyed. Only a small part exists under the old Erie Canal Aqueduct. In its day, the system would carry people underground on what were essentially streetcars. If the system still existed today, it would probably be described as a light rail service.

Rochester, Utica, and other upstate cities once had streetcar and interurban systems.

Recently, the state has taken more interest in increasing the frequency and speed of intercity rail, going so far as to propose the creation of a statewide high-speed rail network.

New York City is a hub for intercity bus networks in the northeastern United States. The rest of the state is served by intercity buses run by companies such as Megabus, Greyhound Lines, Trailways of New York, OurBus, [2] North Fork Express, [3] Hampton Jitney, Coach USA Short Line and others.

Most tunnels in the state of New York are within New York City.

The principal north-south highways are as follows:

The principal east-west highways are as follows:

Interstate 84 has one auxiliary route, Interstate 684.

In the NY state, pedestrians are one out of 4 fatalities, each year. Those fatalities are due to unsafe actions both from motorists and from pedestrians. [6]

NY state is one of the fives US states with the most pedestrian fatalities: 879 fatalities of which 294 (33%) occurred at intersections. [7]

New York has a system of numbered state bicycle routes. [8]

New York City boasts one of the most extensive urban transportation systems in the world, including two distinct mass transit systems:

New York City's automobile network is also extensive. It includes many bridges and limited access highways built by Robert Moses, and is integrated with a street grid that dates to the early 19th century.

While extensive, much of New York City's infrastructure is aging and in need of capital investment. Despite the lack of expansion and investment during the past few decades, many infrastructure projects including the Second Avenue Subway, 7 Subway Extension, Fulton Center, and the East Side Access have already started construction during the 2000s.

Every major form of transportation serves Long Island, including three major airports, railroads and subways, and several major highways. There are historic and modern bridges, recreational and commuter trails, and ferries as well.

There are currently ten road crossings out of Long Island, all within New York City limits at the extreme western end of the island. Plans for a Long Island Sound link at various locations in Nassau and Suffolk Counties have been discussed for decades, but there are currently no firm plans to construct such a crossing.

The Long Island Rail Road is the busiest commuter railroad system in North America, carrying an average of 282,400 customers each weekday on 728 daily trains. Chartered on April 24, 1834, it is also the oldest railroad still operating under its original name. [9]

New York presently only boasts the Buffalo Metro Rail, which is arguably a light rail system. Proposals include: