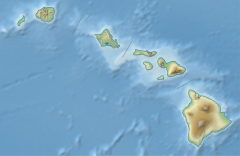 Kapalua
Location on Maui in the state of Hawaii

The Sentry Tournament of Champions is the calendar-year opening tournament of golf's PGA Tour season, played in Hawaii on the island of Maui. [2] The tournament was founded in 1953; its field is restricted to golfers who won a tournament on the tour during the previous calendar year. [3] From 1986 through 2013, it was the opening event of each tour season; the PGA Tour switched to its wrap-around season (starting season in September and ending in August) in the fall of 2013.

The Sentry Tournament of Champions is held during the first week of January and, since 1999, has been played over the Plantation Course at the Kapalua Resort near Lahaina on the island of Maui in Hawaii. Unlike most PGA Tour events, it is a par 73 course.

Previous venues have been the Desert Inn Country Club in Las Vegas, Nevada, from the event's inception until 1966, and the Stardust Country Club, also in Las Vegas, in 1967 and 1968. For the following thirty years, it was played at La Costa Resort and Spa in Carlsbad, California; it moved from May in 1985 to January in 1986, and relocated to Maui in 1999.

The tournament has had several title sponsors, the first being Mutual of New York (MONY) between 1975 and 1990. After three years of sponsorship by Infiniti, German car maker Mercedes-Benz began a sixteen-year association with the event and the Tournament of Champions name was dropped. In 2010 the tournament entered a new ten-year agreement with Korean broadcasting company Seoul Broadcasting System, with the tournament being renamed as the SBS Championship. [3] Hyundai took over title sponsorship in 2011 with SBS remaining a sponsor. [4] In 2017, SBS became title sponsor again after Hyundai took over title sponsorship of the PGA Tour event at Riviera Country Club. [5] Sentry Insurance signed on as the event's title sponsor with a five-year agreement starting in 2018, [6] later extended through 2030. [7]

From 2012 to 2015, the tournament used a Friday–Monday format, joining the Deutsche Bank Championship as the only two PGA Tour events with this format. The format allowed the tournament to have its own day to finish, and not compete against the second day of the NFL Wild Card Playoff round.

For the 2021 tournament, the PGA Tour announced that the field would be expanded to include the 30 players qualifying for the 2020 Tour Championship in addition to tournament winners during the 2020 calendar year. The change was made following the cancellation of ten tournaments due to the COVID-19 pandemic. [8]

While being played at LaCosta, the weekend rounds were traditionally televised by ABC Sports. However, after moving to Hawaii in 1999, the time difference was not conducive to network television. The event moved to ABC's cable partner ESPN for four-round coverage. In 2007, the event moved to four-round coverage on the Golf Channel. In 2012, NBC Sports began showing weekend play, while also producing the new Monday final round for sister network Golf Channel. Starting in 2018, Thursday-Sunday coverage split between Golf Channel and NBC, with the latter picking up weekend coverage when not in conflict with the network's broadcasts of NFL playoff games. [9]

Sixteen men have won the tournament more than once through 2020.