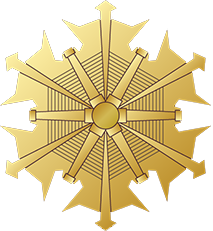 The Tokyo Fire Department (東京消防庁, Tokyo Shōbōchō, TFD) is a fire department headquartered in Ōtemachi, Chiyoda, Tokyo, Japan. [2] The TFD was formed on March 7, 1948, and is responsible for protecting the Tokyo Metropolis Area. The Fire Department is the largest urban fire department in the world. Covering the 23 Wards of Tokyo and parts of Western Tokyo, it provides assistance in case of fires, biological, chemical, and radioactive hazards, as well as earthquakes and flooding. First response for medical services and all types of rescues are also provided. The department handles varied challenges from urban settings to mountain forests. The department is part of the Tokyo Metropolitan Government. However, this department is distinguished from Fire and Disaster Management Agency, which is an external agency of the Ministry of Internal Affairs and Communications.

A few times a year, the department has demonstrations and preparedness training. These are small and others might be large-scale events.

Demonstration The demonstrations are mostly public awareness events for the people who live in the Tokyo area. This also shows the taxpayers where the funding of the department was spent, and the department's state of preparedness. This is also used as a recruiting tool for future firefighters. Commonly one sees a small demonstration every so often in district centers, schools, and shopping arcades. The firefighters would give rides, tours, or maybe let you touch equipment. 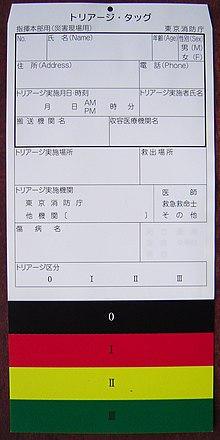 The biggest demonstration is Dezomeshiki. It's the New Year Tokyo Fire Department Review; and happens in January every year. They present all the resources and training that the Department currently are using. They perform a fake disaster where the firefighters use their equipment. They also set up a showroom for equipment and a small museum.

The preparedness training also uses Mass Casualties Tags. These tags are used in major disasters. These tags give information about the person and sort out many who could be saved with the current status of medical service, a form of triage. 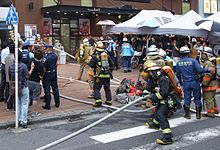 Tokyo Fire Department responding to a fire in Shinjuku.

The department currently has 12 different types of fire fighting and rescue robots. These robots are designed to handle disasters that are too dangerous for personnel during an emergency. Some types of robots can shoot water or foam on to fires. One type can rescue a person and another type are able to move large objects. Currently all robots are controlled by remote operators.

Future firefighting robotics might have simple artificial intelligence to search for life and be able to move on terrain without operator's assistance.

Rank insignias are on a small badge, pinned above the right pocket. Rank is denoted by stripes and Hexagram stars. The design of the insignias came from older Japanese-style military insignias. Some rank badges are different colors such as the fire jacket for a station commander.

Japan's first fire service was founded in 1629 during the Edo era, and was called Hikeshi (Japanese: 火消し, lit. Fire eraser). During the Meiji Period, when Japan opened its doors to the West, the Hikeshi was merged into the Tokyo Metropolitan Police Department in 1881. During this time period, pumps were imported and domestically produced, and modern firefighting strategies were introduced. The fire service would remain part of the police department until 1948 when the Tokyo Fire Department was organized. 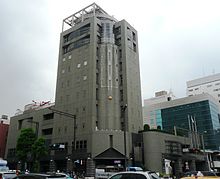 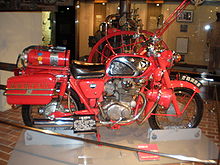 The Tokyo Fire Museum is at Yotsuya 3–10, Shinjuku-ku. It has a large collection of historic fire fighting apparatuses. The museum has fire fighting history of the 17th and 18th centuries with large, scale-model dioramas showing scenes of destruction from past events. Models shows the uniforms and equipment that was used during that time. Other parts of the museum shows old pictures and films. They have scenes to show the birth of modern fire fighting vehicles, equipment, and fire suits. The museum has some of the very first pumps and hoses that were used. Twentieth-century firefighting history is also shown and the future of firefighting is exhibit at the museum, such as high-tech robots. A current working fire station is right next to the museum.

The Tokyo Fire Department wants all visitors and current residents from other nations to feel safe and know the fire codes of the city. A multilingual web-page was created to promote fire safety.