Sparks is also a member of the Emeritus Board of the Alice B. Toklas LGBT Democratic Club, a Navy veteran and a trained engineer. [2] [3] [4] She is a member of the board of directors of the Horizons Foundation, a community-based LGBT philanthropic organization.

Theresa Sparks was born on April 8, 1949, in Kansas City, Kansas, where she grew up. [3] [5] [6] [7] [4] [8] Assigned male at birth, Sparks expressed her gender identity at an early age by wearing women's clothing, though she later resisted these impulses in adolescence. [3]

Sparks went to Kansas State University and graduated with a degree in engineering. [4] She served in the United States Navy. Later she managed several waste management and recycling companies and patented two recycling techniques. [7]

She married her first wife in 1971 and together they had three children: two sons and a daughter. After nine years of marriage, Sparks finally revealed to her wife her desire to live as a woman. They separated shortly after and eventually divorced. Sparks remarried, but that marriage also ended in divorce. [3]

Sparks underwent "intense therapy and an electric shock treatment" to try to suppress her femininity, before deciding at last to embrace her gender identity. "It's an unusual condition, but it's not unnatural," she said later. "You discover that the only way to live with it is to transition physically so your physical appearance matches how you feel about yourself." [7]

But even there, in a city known as one of the most transgender-friendly in the country, Sparks faced challenges as a transgender woman. [9] Despite 20 years of experience in waste management and managing three environmental consulting companies as a man, Sparks struggled to find an occupation in San Francisco as a woman. She applied unsuccessfully for more than 100 jobs. [3] [10] Sparks eventually acquired sporadic work as a cab driver, bank teller, and census taker to avoid becoming homeless. [3] [7]

One evening while walking through the Tenderloin neighborhood of San Francisco, an area known to be strolled by transgender sex workers, Sparks said she was harassed by a police officer, who demanded to see her identification and questioned what she was doing there. "[The police] assume if there's a transgender person walking down the street in the Tenderloin it's probably because they're prostitutes," she later said about the experience. [11] 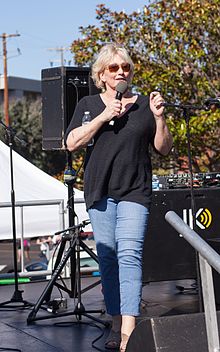 In 2000, Sparks' activism prompted Supervisor Mark Leno to create a new city work group, the Transgender Civil Rights Implementation Task Force, of which Sparks became a charter member. [18] A year later, Sparks and Leno helped to establish broader medical benefits for municipal employees diagnosed with Gender dysphoria. [7] [19] The new law was the only governmental policy of its kind in the nation and provided medical coverage for hormone therapy and sex reassignment surgery. [19]

Mayor Willie Brown appointed Sparks to chair the LGBT Advisory Committee of the San Francisco Human Rights Commission in early 2001, making her the Commission's first-ever transgender appointee. [4] Sparks used her position to lobby for a new transgender- sensitivity training program for county police officers, which the San Francisco Police Department (SFPD) on August 10, 2001 agreed to produce. The program includes specific guidelines for how to treat transgender people and how to appropriately document cases involving transgender people. [11] She served on the commission for two four-year terms. [20]

Impressed with Sparks' public service, the San Francisco Board of Supervisors appointed Sparks a police commissioner, and she was sworn in on April 30, 2004 by Mayor Gavin Newsom. [22] She served for two years as the commission vice president until May 24, 2006, when she voluntarily declined to reapply for that position: the San Francisco Chronicle reported Sparks "slam[med]" her fellow commissioners, citing the Police Commission's lack of progress in addressing the city's high murder rate, loss of SFPD staff, and low police morale. [23]

On May 9, 2007, Sparks made history yet again when she was elected president of the San Francisco Police Commission by a single vote, making her the first transgender person ever to be elected president of any San Francisco commission and San Francisco's highest ranking transgender official. [6] [24] [25] The deciding vote was cast by Commissioner Joe Alioto Veronese, which came as a surprise to many observers who expected the Newsom-appointee to back Joe Marshall, the candidate Newsom preferred. Newsom himself was reportedly stunned. [26]

"Theresa defines trailblazer," Cecilia Chung told the San Francisco Bay Times shortly after the election. Chung, deputy director of the Transgender Law Center and a member of the San Francisco Human Rights Commission, saw Sparks election as a landmark moment for transgender people in the city. "Her brilliance and dedication continue to open doors for transgender people throughout San Francisco and the state. She represents a strong, committed voice for our community on issues of police reform and oversight; and this election is a clear indicator of the increasing number of leadership opportunities that are open to more and more community members." [25]

Sparks found some temporary work in 2001 in the shipping department of the worker-owned sex toy company Good Vibrations. The general manager of Good Vibrations, Beth Doyle, quickly recognized Sparks' management skills and hired her as a financial manager when the position became available three months later. [27]

Doyle left the company in April 2005, frustrated with the constraints of the co-op business structure, and the board of Good Vibrations elected Sparks to be the new general manager. On February 1, 2006 under Sparks' leadership, the board voted unanimously to drop Good Vibration's co-op structure but retain its progressive business roots. Sparks herself was the main instigator of the change. "We researched Whole Foods, Ben & Jerry's, and others. All these companies have progressive values, but they're not co-ops," Sparks' explained to a reporter later. "Something had to give." Shares of the newly structured company were split evenly. [27]

However, Good Vibrations' Internet sales, which had initially been successful and at one time accounted for two thirds of its income, began to suffer as mass-market retailers Amazon.com and Drugstore.com began to carry adult merchandise. The company also faced competition from small independent adult entertainment websites. [28] Facing a cash crisis, the company appealed on its website for potential investors to enable it to buy inventory for the 2007 holiday season. In September, 2007, the company was purchased by adult novelty wholesaler GVA-TWN, which also owns 50 adult retail stores in the Midwest and affiliate program PECash. [28]

Before the sale, the board of directors included Sparks, Margaret Cho, Donna Daniels, Charlie Glickman, Carol Queen, Linda Shaw and James Williamson. Both companies announced that there were no immediate plans to lay off workers or change the company's management. [28]

At a speech commemorating the Compton's Cafeteria riot, Sparks said her company was "one of the top U.S. employers of transgenders" and "proud to continue the fight for transgender equality." [29]

Woman of the Year

In 2003, Theresa Sparks became the first transgender woman ever named "Woman of the Year" by the California State Assembly. [30] Assemblyman Mark Leno, Sparks' friend and a fellow activist for transgender civil rights, said he selected Sparks for the award, not only to honor her advocacy on behalf of the LGBT community, but to humanize a transgender civil rights bill he introduced earlier that year. [31] Assembly Bill 196, which was signed into law by Governor Gray Davis later that year, amended the California Fair Employment and Housing Act, making it illegal to discriminate in employment or housing decisions on the basis of transgender status or gender stereotypes. [32] [33]

Jay Leno angered the National Transgender Advocacy Coalition (NTAC) after making jokes about Sparks' award on a March 31, 2003 broadcast of his talk show, The Tonight Show. During his opening monologue, Leno quipped, "The California Assembly awarded a man who had a sex change as its Woman of the Year. When he accepted the award, he said there was a part of him that didn't want to accept it — but that's gone now."

The NTAC's executive director, Vanessa Edwards Foster, criticized Leno's comments as dehumanizing. "In a country where no positive accomplishments of transgender people are ever reported it's curious that belittling humor of these same people is openly welcomed," Forster said. "Leno's remarks took an historic recognition for a transgender community leader and summarily diminished it with insensitive humor." The NTAC also criticized Leno for using the male pronoun to refer to Sparks.

The LGBT Advisory Committee of the San Francisco Human Rights Commission reported at a meeting on April 15 that Jay Leno had apologized to Mark Leno for his comments. Minutes of the meeting also recorded that "national organizations have been responding to Mr. Leno without conferring with Commissioner Sparks first". [34]