From Wikipedia, the free encyclopedia
(Redirected from The University of Texas Medical Branch)

The University of Texas Medical Branch (UTMB) is a public academic health science center in Galveston, Texas. It is part of the University of Texas System. UTMB includes the oldest medical school in Texas, [5] and has about 11,000 employees. [6] In February 2019, it received an endowment of $560 million. [7]

Established in 1891 as the University of Texas Medical Department, UTMB has grown from one building, 23 students and 13 faculty members to more than 70 buildings, more than 2,500 students and more than 1,000 faculty. [8] It has four schools, three institutes for advanced study, a comprehensive medical library, four on-site hospitals (including an affiliated Shriners Hospital for Children), a network of clinics that provide primary and specialized medical care and numerous research facilities.

UTMB's primary missions are health sciences education, medical research (it is home to the Galveston National Laboratory) and health care services. [9] Its emergency department at John Sealy Hospital is certified as a Level I Trauma Center and serves as the lead trauma facility for a nine-county region in Southeast Texas; it is one of only three Level I Trauma centers serving all ages in Southeast Texas. [10]

In fiscal year 2012, UTMB received 20 percent of its $1.5 billion budget from the State of Texas to help support its teaching mission, hospital operation and Level 1 Trauma Center; UTMB generates the rest of its budget through its research endeavors, clinical services and philanthropy. It provides a significant amount of charity care (almost $96 million in 2012), and treats complex cases such as transplants and burns. [11]

In 2003 UTMB received funding to construct a $150 million Galveston National Biocontainment Laboratory on its campus, one of the few non-military facilities of this level. It houses several Biosafety Level 4 research laboratories, where studies on highly infectious materials can be carried out safely. [12] It has schools of medicine, nursing, allied health professions, and a graduate school of biomedical sciences, as well as an institute for medical humanities. UTMB also has a major contract with the Texas Department of Corrections to provide medical care to inmates at all TDC sites in the eastern portion of Texas. UTMB also has similar contracts with local governments needing inmate medical care. 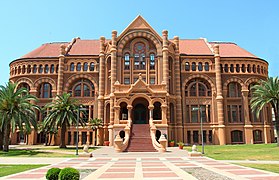 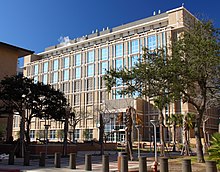 The Galveston National Laboratory at UTMB is the first full-size BSL-4 lab located on a university campus in the United States.

The location of the Medical Department of the University of Texas was decided between Galveston and Houston in a popular vote in 1881, but its opening was delayed due to the construction of the main university campus in Austin, Texas. The need for medical training in Texas was great: in 1891, 80 percent of doctors in the state had under a year of formal training in medicine, and so the "Texas Medical College" was formed in Galveston with the idea that it would become the medical department once state funding began.[ citation needed]

The original building, the Ashbel Smith Building also called Old Red, was begun in 1890 under the supervision of the Galveston architect Nicholas J. Clayton. Clayton toured several medical colleges in the North and East before drawing up his plans for the building. The medical school campus also included the John Sealy Hospital, which provided charity care for any who claimed Galveston residence.

Upon opening, the Red Building had been starkly underfurnished, a problem which was not fully remedied until after the Hurricane of 1900, when the state rallied around the ravaged city. Dr. Thompson, professor of surgery, said that "the regents were so generous in repairing the damage to the building and restoring the equipment, that we were actually in better shape at the end of the year 1901 than we had been before." In addition, the damage to the roof of Old Red allowed for the addition of skylights, which had always been wanted for the dissection room. Also in 1901, the school admitted their first woman faculty member, Marie Charlotte Schaefer. [13]

In 1996, UTMB purchased the adjacent 128-year-old St. Mary's Hospital, the first catholic hospital in Texas. [15] The building was converted into the Rebecca Sealy Psychiatric Hospital.

UTMB became a member of the Houston-based Texas Medical Center in 2010. [16]

Hurricane Ike (2008) caused significant flood damage to nearly every building on campus, including the John Sealy Hospital. However, UTMB has about $1.4 billion to restore, harden and expand its campus. Much of the money was approved by the 81st Texas Legislative session, $450 million comes from FEMA, $130 million from insurance, $200 million from the Sealy and Smith Foundation, and $50 million from the Social Service Block Grant Funds. Reconstruction is actively underway as well as hardening of the campus to protect buildings and resources from future storms. UTMB restored its educational programs within weeks after the Hurricane Ike and the research endeavor came back steadily thereafter. In 2011 the foundation committed $170 million towards the construction of a new Jennie Sealy Hospital on the UTMB campus, an amount that represents the largest single gift ever to a Texas health institution. [17] 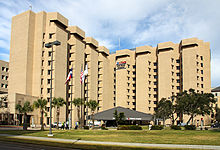 The Shriner's Hospital for Children on UTMB's campus. 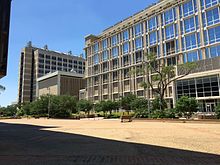 From its modest beginnings in the 1890s as the first state medical school in Texas, the University of Texas Medical Branch at Galveston (UTMB) has developed into a large, sophisticated health science complex with numerous schools and institutes, including: