The Church of Jesus Christ of Latter-day Saints in California

This painting by Duncan McFarlane, shows the ship Brooklyn. 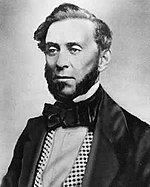 A Mormon immigrant company, under direction of Samuel Brannon, departed on the ship Brooklyn from New York on February 4, 1846 en route to the Great Salt Lake Valley via California. The group under the direction of Brannan navigated around Cape Horn and arrived at Yerba Buena on July 31, 1846. The company of around 230 people were the first known Latter-day Saints to set foot in California. Their numbers nearly tripled the population of the small town of Yerba Buena, later renamed San Francisco. While there, Brannan and other Saints began publication of one of California's first English-language newspapers, the California Star, in October 1846. [2] One of the Brooklyn saints, Angeline Lovett, set up a school in the old Franciscan Dolores Mission, the first English-language school in California. [3]

During the early autumn of 1846, Brannan led 20 men to the San Joaquin Valley where they founded a Mormon farming village named New Hope Colony. It soon failed as heavy seasonal storms flooded the valley, destroying their crops. Most of the Brooklyn saints left California for Salt Lake City in 1848. [2]

In January 1847, the Mormon Battalion arrived in San Diego, having constructed the first wagon road across the southwest into Southern California. Battalion Members helped construct a number of building and public works in San Diego. They then traveled to Los Angeles where they built a fort and raised the American flag. Six discharged battalion members were at Sutter's Mill in northern California when gold was discovered there on January 24, 1848. Heading for their families in Utah, they carved the first wagon road over the Sierra Nevadas that would be used by thousands of westward bound travelers including the gold rush " Forty-Niners." Sometimes called the "49er's Highway," it is officially called the Mormon Emigrant - Kit Carson Highway. [4]

In February 1856, George Q. Cannon began publication in San Francisco of the Western Standard, a weekly periodical supportive of the Church. [5]

April 1865 sketch of the ruins of the Mormon Elders residence in San Bernardino, California.

The first colonization from Utah to California came in 1851 when a company of about 450 saints and slaves under direction of Elders Amasa M. Lyman and Charles C. Rich of the Quorum of the Twelve Apostles settled at what is now San Bernardino. The colony was the final settlement in a string of Mormon communities extending 800 miles (1,300 km) from Salt Lake City in an area known as Deseret. The community thrived, and on July 6, 1851, the San Bernardino Stake, California's first, was organized. The colony was dissolved by the Church at the advance of Johnston's Army toward Salt Lake City in 1857. Brigham Young instructed the settlers to return to Utah to colonize. About 1,400 (fewer than half) returned to Utah at the request of the church. The San Bernardino Stake was dissolved in 1857 as well as the ecclesiastical units within the stake. [2]

The Los Angeles Branch was created on March 21, 1895. [6] In 1896, the Northern California and Southern California conferences were organized. The Sacramento Conference was added in 1898. [7] Most missionary work around the turn of the century took place in larger population centers.

On February 18, 1939, 1,400 people visited the Church's exhibit at the opening day of the Golden Gate International Exposition in San Francisco. This exhibit was a visitor's center portraying a reduced-size Salt Lake Tabernacle.

In 1980 President Spencer W. Kimball spoke to members in the Los Angeles area in the Rose Bowl. An estimated 75,000 attended that event. [9]

At the beginning of the year 2000, California had 17 missions, more than any other state in the United States. In the state's major cities, many minority converts were taught and baptized in their native language. With a significant immigration to California from Latin America, five Spanish-speaking stakes have been organized. Various Asian and Polynesian wards function as well, and a Tonga stake was created in San Francisco in 1992. There are currently more than 200 ethnic wards and branches in California. [8] [10]

In 2020, the LDS Church canceled services and other public gatherings indefinitely in response to the spread of the coronavirus pandemic. [12]

In July 1996, the sesquicentennial of the arrival of the ship Brooklyn was celebrated through reenactment of the event on a replica ship that sailed into the San Francisco Bay. Members throughout the state commemorated the anniversary with observances that included an exhibit at the San Francisco Maritime Museum, [13] performances of the Mormon Tabernacle Choir at the Davies Symphony Hall, [14] dedications of plaques honoring the early settlers, and pioneer activities and parades. [15]

In addition to commemorating the arrival of early LDS settlers, as well as contributions to the development of the state, members throughout California donated many hours of service in community projects sponsored by wards and stakes, including gathering supplies and food for the needy; cleaning parks, beaches and roadways; painting and repairing homeless shelters, and cleaning up graffiti.

On January 18, 1997, 2,400 members re-enacted the arrival of the Mormon Battalion in California 150 years earlier. Other Mormon Battalion celebrations along the coast followed on respective anniversaries. On March 6, 1997, President Gordon B. Hinckley spoke to a record audience of the Los Angeles World Affairs Council, [16] and on March 19, he addressed the World Forum of Silicon Valley. [17] He also spoke at various Church events during the year. A Church-produced video depicting the discovery of gold at Sutter's Mill was donated to the state of California to be shown continuously at Marshall Gold Discovery State Park in Coloma.

Membership growth has slowed in California since 1991 due to significant out-migration of members.

In times of disasters, such as earthquakes, fires, and floods, members in California have donated countless hours of service, helping communities to recover.

In 1997, members in San Diego donated some 40-50 tons of food to eight community agencies for the homeless and needy.

In May 2003, hundreds of Los Angeles-area Muslims and members of the Pasadena California Stake joined in preparing emergency supplies for Iraqi families. With conflicts of the war with Iraq completed, a humanitarian aid day was set for May 10, 2003, where hygiene kits for some 10,000 families were completed and added to a $650,000 shipment of medical supplies and blankets donated by the Church. [18]

Members in the state have also taken leadership roles in moral issues such as combating pornography and have cooperated with other congregations of various interfaith endeavors. Members have been active in other moral issues including abortion, gaming, drug and alcohol abuse, and marriage. [19]

California currently has 7 temples in operation and 1 that has been announced.

Latter-day Saints had a significant role in establishing and settling communities within the " Mormon Corridor", including the following in California (i.e. in the High Desert (California) region): [23]