The Texas Medical Center (TMC) is a 2.1-square-mile (5.4 km2) [1] medical district and neighborhood in south-central Houston, Texas, immediately south of the Museum District and west of Texas State Highway 288. Over sixty medical institutions, largely concentrated in a triangular area between Brays Bayou, Rice University, and Hermann Park, are members of the Texas Medical Center Corporation—a non-profit umbrella organization—which constitutes the largest medical complex in the world. [1] The TMC has an extremely high density of clinical facilities for patient care, basic science, and translational research. [1] [2] [3]

The Texas Medical Center employs over 106,000 people, hosts 10 million patient encounters annually, and has a gross domestic product of US$25 billion. [1] Over the decades, the TMC has expanded south of Brays Bayou towards NRG Park, and the organization has developed ambitious plans for a new "innovation campus" south of the river. [4] The 4.93-square-mile (12.8 km2) Medical Center / Astrodome area, highly populated with medical workers, is home to over 20,000 people. [5] [6]

The TMC is serviced by the METRORail Red Line, a north-south light rail route which connects the district to Downtown Houston and NRG Park.

The Center receives an average of 3,300 patient visits a day, and over eight million annual patient visits, including over 18,000 international patients. The TMC has over 750,000 ER visitors each year. In 2011, the center employed over 106,000 people, including 20,000 physicians, scientists, researchers and other advanced degree professionals in the life sciences. [9] The TMC has over 160,000 visitors each day. 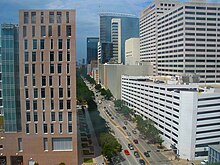 Main Street within the Texas Medical Center, viewed from the Baylor College of Medicine (view towards Houston Downtown)

The Texas Medical Center was established in 1945 in part with funds endowed to the M.D. Anderson Foundation by businessman Monroe Dunaway Anderson. [10] The fund's first gift was a check of $1,000 to the Junior League Eye Fund for eyeglasses. In 1941, the Texas State Legislature granted funds to the University of Texas for the purpose of starting a cancer research hospital. M.D. Anderson Foundation matched the state's gift to the university by supplying funds and land on the condition that the hospital be established in Houston, and named after its founder.

President Franklin D. Roosevelt approved the purchase of 118 acres (0.48 km2) from the estate of local entrepreneur George Hermann (namesake of Hermann Park) in 1944 for the construction of a 1,000-bed naval hospital in Houston. The hospital, later renamed the Michael E. DeBakey Veterans Affairs Medical Center, opened in 1946 and became a teaching facility for the Baylor College of Medicine. Also in 1946, several projects were approved for inclusion in the Texas Medical Center including:

M.D. Anderson Hospital for Cancer Research of the University of Texas began construction in 1953. Texas Children's Hospital admitted its first patient in 1954.

The TMC Library provides access to thousands of current digital books and journals and its John P. McGovern Historical Collections and Research Center houses rare medical books dating back to the 1500s, and historical manuscripts such as the McGovern Collection on the History of Medicine, the Menninger Collection of Psychiatry and Psychoanalysis, and the Atomic Bomb Casualty Commission which recorded the after-effects of the atomic bombings of Hiroshima and Nagasaki.

In 1993, The University of Texas M.D. Anderson Cancer Center began a $248.6-million expansion project which constructed an inpatient pavilion with 512 beds, two research buildings, an outpatient clinic building, a faculty office building, and a patient-family hotel. From 2005 to present, the George and Cynthia Mitchell Basic Sciences Research Building, the Ambulatory Clinical Building, the Cancer Prevention Center and a new research building on the South Campus opened. The Proton Therapy Center, the largest facility in the United States where proton therapy is used to treat cancer, opened in July 2006. [11]

In 2001, the Texas Medical Center was devastated by Tropical Storm Allison, which flooded basements and the first floors with 18 inches of water. [12] This resulted in retrofitting of storm doors and barriers to prevent future flooding.

The Memorial Hermann Healthcare System constructed the six-floor, 165,000-square-foot (15,300 m2) Memorial Hermann Heart & Vascular Institute. Also recently completed around 2006 was the 30-story Memorial Hermann Medical Plaza, which is now the largest medical office building in the Texas Medical Center. At night, it became recognizable by its unique rainbow lantern. [13] The construction was part of the system's citywide "Century Project" initiative.

In 2005, Baylor College of Medicine opened the Baylor Clinic. 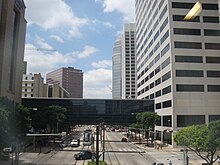 Fannin Street within the Texas Medical Center, viewed from the crosswalk between two buildings of the Houston Methodist hospital

The Texas Children's Hospital announced the largest investment and program expansion ever by a single pediatric organization. The $1.5 billion, four-year initiative was targeted for completion in 2010 and focused on research and accessibility. Major projects included the development of the neurological research institute ($215 million), the formation of a maternity center ($575 million), and the expansion of existing research facilities ($120 million). Texas Children's was undertaking the development of one of the largest pediatric hospitals in a suburban setting ($220 million). The remainder of the expenditures were earmarked for new equipment and information systems. [14]

In 2010, the University of Texas Medical Branch at Galveston, including the John Sealy Hospital, became the 49th member of the Texas Medical Center and the first member-institution located outside the City of Houston. [15] [16] [17]

Texas Medical Center–West Campus, serving residents of greater west Houston and adjacent areas, opened in January, 2011. Representing an initial investment of more than half a billion dollars, and almost 1.2 million square feet of healthcare development, the first two facilities to open in the new campus were the Texas Children’s Hospital and The Houston Methodist West Hospital. Texas Children’s West Campus is among the nation’s largest suburban pediatric hospitals. [18]

In 2012, Texas Medical Center added the Shriners Hospitals for Children in Galveston, which treats pediatric trauma burns, as its 50th member institution. [19]

In 2020, Texas A&M announced plans to build a $550 million complex on the southern side of the TMC including academic, medical office, and housing buildings. [21]

View of the Texas Medical Center skyline from the northwest. Rice Stadium can be seen in the foreground at right.

The Texas Medical Center is a dense agglomeration of hospitals, schools, and ancillary businesses clustered on a triangular piece of land bordered by Rice University and the neighborhood of Southampton to the west, Brays Bayou to the south and east, and Hermann Park to the north. With 106,000 employees, the TMC has an employment density of approximately 50,475 per square mile (19,489/km2). The Texas Medical Center Corporation has compared its dense cityscape to the Chicago Loop and Lower Manhattan. [23]

The core of the TMC is serviced by three large arterial roads. Main and Fannin streets run southwest to northeast, while Holcombe Boulevard runs west to east. The Texas Medical Center is one of the few employment centers in Houston which is not directly serviced by a freeway; the nearest freeway is Texas State Highway 288, located to the east of Hermann Park. To compensate, the TMC has developed strong transit connections; the entirety of the district is serviced by the METRORail Red Line, which runs along Fannin. Rail stops in the Medical Center include Memorial Hermann Hospital/Houston Zoo, Dryden/TMC, and the Texas Medical Center Transit Center, which doubles as a hub for local bus routes. These three stops are the busiest stations on the Red Line; ultimately, the district's bus, light rail, and shuttle services deliver nearly 65,000 trips per day to and from the area. [24]

In the 2010s, rapid development within the Medical Center began to strain existing transportation infrastructure; the average daily traffic on Fannin Street and nearby arterial Kirby Drive is expected to double by 2035. [25] New development during the first half of the decade is expected to require an additional 50,000 parking spaces to meet demand. [25] Solutions to the district's traffic problems include expanding existing arterial roads, boosting transit capacity, and constructing new contract parking lots on the outskirts. [25]

The Third Ward Redevelopment Council defines the TMC as being part of the Third Ward. T. R. Witcher of the Houston Press wrote in 1995 that the TMC and nearby areas are "not the first places that come to mind when you say "Third Ward,"[...]". [26] 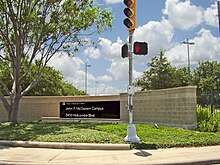 Formerly TMC had its own employee housing, Laurence H. Favrot Tower Apartments, which accommodated TMC employees and their dependents. [33] On August 31, 2012 the complex closed. [34] Dependent children living there were within the Houston Independent School District (HISD) and zoned to Roberts Elementary School in Southgate, [35] Ryan Middle School in the Third Ward, [36] and Lamar High School in Upper Kirby. [37]

Formerly known as the Doctors Orchestra of Houston, the Texas Medical Center Orchestra was established in November 2000 and is one of the few orchestras in the world that originated from health professions. Members of the orchestra include physicians, dentists, nurses, medical students, biomedical scientists, social workers and other health professionals. [38]

The mission of the orchestra is to provide health care professionals with a high-quality outlet for creative expression through the world of symphonic music; perform regularly at affordable concerts that are open to the public and in an accessible venue; attract a diverse audience by commitments to select popular programming reflecting Houston’s diversity; and bring public attention to, and provide programmatic support for, medically related and/or educational charities. [39]

In an effort to increase appreciation for classical music in young audiences, Texas Medical Center Orchestra has developed a close relationship with the charter school, KIPP SHARP of KIPP Houston. [42] By coordinating efforts with KIPP SHARP teachers and administrators, TMCO has integrated its musical programming into the school's curriculum. Works that the orchestra performs are taught and discussed in history, art and music classes. The students are invited to display artwork and essays in the Wortham lobby at TMCO concerts, and they are encouraged to at attend with their families. TMCO has included KIPP choirs and orchestras in concert performances. [40]

In 2011, TMCO began working with the National Multiple Sclerosis Society, Lone Star Chapter in an annual co-sponsorship of a bicycle ride, "Gran Fondo: Texas TMCO" that precedes the MS150 and benefits both organizations.

The main TMC area is within the Houston Independent School District (HISD).

Melinda Webb School, a private school for deaf infants to 7 years old, is located in the TMC; [44] it is operated by the Center for Hearing and Speech and was previously at 3636 W. Dallas. [45] The school serves as a day school for children not yet mainstreamed into regular classrooms and a speech and therapy center for those that are. Previously known as the Houston School for Deaf Children, it was given its current name, after a deaf girl, in 1997. [46] The girl died of leukemia circa 1958; a former student of the school, she had been the first area deaf child to be mainstreamed into a public school, as she began attending one in Texas City in 1954. Her father, Frank Webb, donated $1 million to what became the Melinda Webb School in 2002. [45] That year its enrollment was 35-40. [46] In 2020 it began admitting preschool students without hearing difficulties to provide a more mainstream environment. [44]

Medical Center Charter School opened in 1996, [47] catered to employees working in the Medical Center, and had the Montessori method, [48] used until grade two. Its specialty as of 2003 was foreign languages. [49] It was not located near the TMC area but in the Westbury area. [50] In 2014, the Texas Education Agency (TEA) announced that the school's performance was insufficient and that it sought to revoke its charter. [47] By 2018, its charter had closed. [51]

There is a Jewish house of worship, Medical Center Chabad House, which maintains the Aishel House program. [56]

The Weekley Family YMCA is in the area. It opened in 1951 as the Southwest YMCA, [58] in West University Place. The current facility in Braeswood Place, Houston broke ground in 2001. [59]