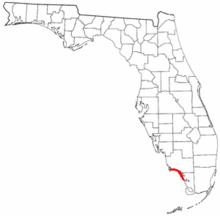 The Ten Thousand Islands are located near the south end of the Florida peninsula on the Gulf Coast, west of the Everglades

The Ten Thousand Islands are a chain of islands and mangrove islets off the coast of southwest Florida, between Cape Romano (at the south end of Marco Island) and the mouth of the Lostman's River. Some of the islands are high spots on a submergent coastline. Others were produced by mangroves growing on oyster bars. [1] Despite the name, the islets in the chain only number in the hundreds.[ citation needed]

Almost all of the Ten Thousand Islands are currently uninhabited. The largest, Chokoloskee Island, which is connected to Everglades City by a causeway, has about 400 permanent residents. Other islands have been sporadically inhabited in the 19th and 20th centuries by individuals or families. [9] 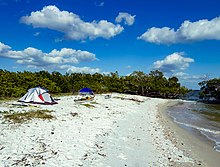 Some of the Ten Thousand Islands are suitable for overnight visits, as dictated by the United States Fish and Wildlife Service. Since this is a wilderness area where wind, weather and lack of fresh water can become threatening, the Wildlife Service recommends only seasoned canoeists and sea kayakers attempt the trip.

Ten Thousand Islands archipelago is among the best and last remaining dark skies sites in coastal Southwest Florida. Most notable is Pavilion Key that lies 11 miles south of Everglades City and lacks any urban development to the south of it. The pristine nature and low south latitude makes the area among the best and unique spots for stargazing and Milky Way astrophotography. [11]