From Wikipedia, the free encyclopedia
This article is about the song by Eagles. For other uses, see Take It Easy (disambiguation).
Single by The Eagles

"Take It Easy" is a song by the American rock band Eagles, written by Jackson Browne and Eagles band member Glenn Frey, who also provides lead vocals. It was the band's first single, released on May 1, 1972. It peaked at No. 12 on the July 22, 1972, Billboard Hot 100 chart. [2] [3] It also was the opening track on the band's debut album Eagles and it has become one of their signature songs, included on all of their live and compilation albums. It is listed as one of The Rock and Roll Hall of Fame's 500 Songs that Shaped Rock and Roll.

Jackson Browne later recorded the song as the lead track on his second album, For Everyman (1973), and released it as a single as well, although it did not chart. [4] Travis Tritt also covered the song for the 1993 Eagles' tribute album Common Thread: The Songs of the Eagles; the video for Tritt's version is notable for the appearance of all five members of the Eagles together again for the first time in 13 years after their break-up, and it led to the reunion of the band a few months later. [5]

Jackson Browne originally began writing "Take It Easy" in 1971 for his own eponymous debut album but was having difficulty finishing the song. Browne's friend Glenn Frey - who lived in the same Santa Monica apartment building as Browne - had heard an early version and later asked Browne about it. Browne then played the unfinished second verse that begins with "Well, I'm a-standin' on a corner in Winslow, Arizona...", and Frey finished the verse with "Such a fine sight to see. It's a girl, my lord, in a flatbed Ford, slowin' down to take a look at me." [6] [7] Browne was very happy with the result and suggested that they finish the song together. [8] The resulting song became the first track on the Eagles' debut album and was released as their first single.

Browne told a version of the story in a radio interview: "I knew Glenn Frey from playing these clubs - we kept showing up at the same clubs and singing on the open-mic nights. Glenn happened to come by to say 'hi,' and to hang around when I was in the studio, and I showed him the beginnings of that song, and he asked if I was going to put it on my record and I said it wouldn't be ready in time. He said 'well, we'll put it on, we'll do it,' 'cause he liked it," Browne explained. "But it wasn't finished, and he kept after me to finish it, and finally offered to finish it himself. And after a couple of times when I declined to have him finish my song, I said, 'all right.' I finally thought, 'This is ridiculous. Go ahead and finish it. Do it.' And he finished it in spectacular fashion. And, what's more, arranged it in a way that was far superior to what I had written." [9]

The song was recorded at the Olympic Studios in London with producer Glyn Johns. Glenn Frey sings the lead vocal on the Eagles recording of "Take It Easy". Bass player Randy Meisner sings the harmony vocal in the beginning of the second verse with Frey, but drummer Don Henley sings harmony at the end of the verse ("Though we will never be here again...). [10] Bernie Leadon provides the lead guitar and distinctive banjo parts, as well as harmony vocals. The track's producer Johns said: "On 'Take It Easy' I got Bernie to play double-time banjo; they all thought it was a bonkers idea but it worked. It was already a great song, but that one little thing made it different." [11]

In their early live performances, the Eagles start with an a cappella version of a verse from " Silver Dagger" that begins with "My daddy is a handsome devil..." as an intro to "Take It Easy". [12]

Jackson Browne recorded a version for his 1973 album For Everyman. [13] Sneaky Pete Kleinow plays pedal steel and David Lindley (on electric guitar) teams up with Browne. Mickey McGee's percussion and the other instruments crossfade into the next track on the album, "Our Lady of the Well."

In 1972, Bud Scoppa wrote in Rolling Stone in his review of the Eagles' debut album that "Take it Easy" was "simply the best sounding rock single to come out so far this year. The first time through, you could tell it had everything: danceable rhythm, catchy, winding melody, intelligent, affirmative lyrics, a progressively powerful arrangement mixing electric guitar and banjo, and a crisp vocal, with vibrant four-part harmony at just the right moments for maximum dramatic effect." [14]

On Allmusic.com, William Ruhlmann said that Browne wrote the song in 1971 while working on his debut album, and that "it encapsulated many of the usual themes of his work, touching on the road, women, love as salvation, and an ambivalent sense of fatalism." Discussing the specific lyrics, Ruhlmann goes on: "The opening verse was a joke. The narrator says he is running down the road with seven women on his mind. But this vision of promiscuity is quickly dispelled. Of the seven, four want to own him, two want to stone him, and one just wants to be his friend. The verse introduces the song's point, that, despite troubles, one should 'take it easy.'" Ruhlmann points out that Frey's added verse "lightened the song's mood considerably. Now, the narrator was standing on a corner in Winslow, Arizona, being eyed by a woman in a truck (flatbed Ford) who slowed down to give him the once-over. These unabashedly vain lines weren't exactly consistent with Browne's theme, but they made it sound like the singer really did want to take it easy." [15] 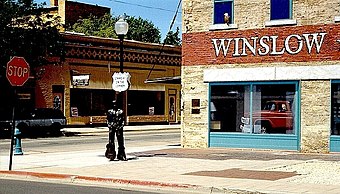 According to Frey, the second verse of "Take It Easy" refers to a time when Jackson Browne's automobile malfunctioned in Winslow, Arizona during one of his trips to Sedona, requiring him to spend a long day in Winslow. [21] In 1999, in responding to the lyrics that made it famous, the city of Winslow erected a life-size bronze statue and mural commemorating the song at the Standin' on the Corner Park. The statue stands near a lamp post, the male figure securing an acoustic guitar between his right hand and the shoe of his right foot. Above his head, a metal sign, crafted in the style of U.S. Route shields, displays the words "Standin' on the corner". The trompe-l'œil mural on the wall behind the statue is that of a storefront, and includes what would appear to be the reflection of a red flatbed Ford pickup truck driven by a blonde-haired woman. The second floor of the mural features an eagle perched in one window on the left and a man and woman (apparently the man on the corner and woman in the truck) embracing in another window on the right. [22] The site has become a landmark that attracted many visitors to the town. [23]

There has, however, been some confusion about the location of original incident that inspired the story in the lyrics. In an interview with Matthew Ziegler, Browne related that it took place in Flagstaff, Arizona, at the Der Wienerschnitzel (now the Dog Haus) at the corner of East Rte. 66 and Switzer Canyon. [24] According to Browne, a young woman cruised by in a Toyota pickup and looked at him and the image stuck with him. Browne had told Frey about the woman in the truck, and Frey then used the incident to add the line about the woman to the song. [25] Browne, however, also stated in an interview with Los Angeles Times that it was always Winslow where his automobile had malfunctioned, although "the image of that girl driving a truck was an image that came from east" (i.e., East Flagstaff). The lines are therefore an amalgamation of two different events. [21]

On September 24, 2016, a life-sized statue of Glenn Frey was added to the Standin' on the Corner Park in Winslow, Arizona, to honor his songwriting contributions to "Take It Easy". [26] Funds for the new statue, which depicted Frey as he appeared in the 1970s, were raised by the city, the Standin' on the Corner Foundation, and a classic rock radio station, KSLX, in Phoenix. [27] [28]

Travis Tritt recorded a version for the Eagles tribute album Common Thread: The Songs of the Eagles, which featured country music artists who were raised on the Eagles' music. On Tritt's version, Bernie Leadon's lead guitar parts were rearranged and performed by Dann Huff. [30] The song was released as a single in 1994, and peaked at number 21 on the Billboard country music charts.

Tritt made a request for members of the Eagles to appear in his video for the song, and the resulting video for Tritt's version featured the Eagles lineup from 1978 to 1980 ( Don Henley, Glenn Frey, Don Felder, Joe Walsh and Timothy B. Schmit) playing billiards in a local tavern and performing as its house band. Frey, who had previously been reluctant to reunite with the band, later said: "After years passed, you really sort of remember that you were friends first ... I just remembered how much we genuinely had liked each other and how much fun we'd had." [30] Frey and Henley subsequently met with their management over lunch two months after the filming of the video and agreed to the reunion of Eagles. A new album, Hell Freezes Over, was released and a tour launched the following year. [5]

"Take It Easy" has also been recorded by Ottar Johansen ( no) (as "Ta Det Rolig" Norse: album Hverdagshelter/ 1978), Express ( fi) ("Ota Iisisti" Finnish/ 1978), Robby Longo ( nl) (album Take It Easy/ 2014), Alice Ripley (album Daily Practice, Volume 1/ 2011), Søren Sko ( da) (album Unpolished - 2001), and Roch Voisine (album AmerIIcana/ 2009). Rick Price and Jack Jones covered the song on their album California Dreaming (2017). One other well performed version is from a tribute band playing in the Netherlands mainly, the Dutch Eagles. They play it live and also recorded this song (on the album Take It) with vibrant similarity to the original.

Johnny Rivers recorded a version on his 1974 album Rockin' Rivers.

Tori Amos's song "In The Springtime of His Voodoo" from her third album Boys For Pele references the song, opening with the lyrics, "Standin’ on a corner in Winslow, Arizona / And I'm quite sure I'm in the wrong song."

The Austin Lounge Lizards' 1988 song "Highway Cafe of the Damned" begins "I was driving down the interstate through Winslow Arizona / I had seven vices on my mind."