The patch awarded to NFWS graduates

In 1968, Chief of Naval Operations (CNO) Admiral Thomas Hinman Moorer ordered Captain Frank Ault to research the failings of the U.S. air-to-air missiles used in combat in the skies over North Vietnam. [4] [5] Operation Rolling Thunder, which lasted from 2 March 1965 to 1 November 1968, ultimately saw almost 1,000 U.S. aircraft losses in about one million sorties. [6] Rolling Thunder became the Rorschach test for the Navy and Air Force, which drew nearly opposite conclusions. [7] The USAF concluded that its air losses were primarily due to unobserved MiG attacks from the rear, and were, therefore, a technology problem. The service responded by upgrading its F-4 Phantom II fleet, installing an internal M61 Vulcan cannon (replacing the gun pods carried under the aircraft's belly by Air Force Phantom units, such as the 366th Fighter Wing), developing improved airborne radar systems, and working to solve the targeting problems of the AIM-9 and AIM-7 air-to-air missiles.

In May 1968, the Navy published the " Ault Report", which concluded that the problem stemmed from inadequate air-crew training in air combat maneuvering (ACM). [8] This was welcomed by the F-8 Crusader community, who had been lobbying for an ACM training program ever since Rolling Thunder began. [1] Among its wide-ranging recommendations to improve air combat performance, the Ault Report recommended that an "Advanced Fighter Weapons School" be established at Naval Air Station Miramar to revive and disseminate community fighter expertise throughout the fleet. CNO Moorer concurred.

According to the 1973 command history of the Navy Fighter Weapons School, the unit's purpose was to "train fighter air crews at the graduate level in all aspects of fighter weapons systems including tactics, techniques, procedures and doctrine. It serves to build a nucleus of eminently knowledgeable fighter crews to construct, guide, and enhance weapons training cycles and subsequent aircrew performance. This select group acts as the F-4 community’s most operationally orientated weapons specialists. Topgun’s efforts are dedicated to the Navy’s professional fighter crews, past, present and future.” [11]

Highly qualified instructors were an essential element of Topgun's success. Mediocre instructors are unable to hold the attention of talented students. Topgun instructors were knowledgeable fighter tacticians assigned to one or more specific fields of expertise, such as a particular weapon, threat, or tactic. Every instructor was required to become an expert in effective training techniques. All lectures were given without notes after being screened by a notorious "murder board" of evaluators who would point out ambiguities or flawed concepts in the draft presentation. The curriculum was in a constant state of flux based upon class critiques and integration of developing tactics to use new systems to combat emerging threats. Instructors often spent their first year on the staff learning to be an effective part of the training environment. [12]

Its objective was to develop, refine, and teach aerial dogfight tactics and techniques to certain fleet air crews, using the concept of dissimilar air combat training, or DACT, which uses stand-in aircraft to realistically replicate expected enemy aircraft and is widely used in air arms the world over. At that time, the predominant enemy aircraft were the Russian-built transonic MiG-17 "Fresco" and the supersonic MiG-21 "Fishbed".

Topgun initially operated the A-4 Skyhawk and borrowed USAF T-38 Talons to simulate the flying characteristics of the MiG-17 and MiG-21, respectively. The school also used Marine-crewed A-6 Intruders and USAF F-106 aircraft when available. Later adversary aircraft included the IAI Kfir and General Dynamics F-16 Fighting Falcon; and the T-38 was replaced by the F-5E and F-5F Tiger II. [12]

In addition to maneuvering skill, knowledge of weapons systems was recognized as important. Weapons system knowledge was determined as a common thread among the 4 percent of World War II pilots who accounted for 40 percent of the enemy aircraft destroyed. The complexity of modern weapons systems requires careful study to achieve design potential. [12]

One British writer claimed that the early school was influenced by a group of a dozen flying instructors from the British Fleet Air Arm who were assigned to Miramar as exchange pilots and served as instructors in VF-121. [13] [14] A British newspaper, The Daily Telegraph, declared in a 2009 headline, "American Top Gun Fighter Pilot Academy Set Up by British." [15] However, the British naval pilots mentioned in the article confirmed that the claim was false and that they had no role in creating the curriculum and no access to the classified programs that the Topgun instructors participated in to refine it. [16] An earlier U.S. Navy air-to-air combat training program, the U.S. Navy Fleet Air Gunnery Units, or FAGU, had provided air combat training for Naval Aviators from the early 1950s until 1960. But a doctrinal shift, brought on by advances in missile, radar, and fire control technology, contributed to the belief that the era of the classic dogfight was over, leading to their disestablishment and a serious decline in U.S air-to-air combat proficiency that became apparent during the Vietnam War. [17] [18] The pilots who were part of the initial cadre of instructors at Topgun had experience as students from FAGU, [18] but the Topgun curriculum at Naval Air Station Miramar in 1968 was not of anyone's creation but their own. 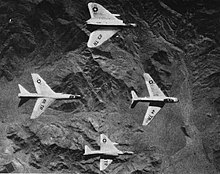 Air crews selected to attend the Topgun course were chosen from front-line units. Upon graduating, these crews would return to their parent fleet units to relay what they had learned to their fellow squadron mates—in essence becoming instructors themselves.

During the halt in the bombing campaign against North Vietnam (in force from 1968 until the early 1970s), Topgun established itself as a center of excellence in fighter doctrine, tactics, and training. By the time aerial activity over the North resumed, most Navy squadrons had a Topgun graduate. According to the USN, the results were dramatic. The Navy kill-to-loss ratio against the North Vietnamese Air Force ( NVAF) MiGs soared from 2.42:1 to 12.5:1, [12] while the Air Force, which had not implemented a similar training program, actually had its kill ratio worsen for a time after the resumption of bombing, according to Benjamin Lambeth's The Transformation of American Airpower.

The success of the U.S. Navy fighter crews vindicated the fledgling DACT school's existence and led to Topgun becoming a separate, fully funded command in itself, with its own permanently assigned aviation, staffing, and infrastructural assets. Topgun graduates who scored air-to-air kills over North Vietnam and returned to instruct included Ronald E. "Mugs" McKeown and Jack Ensch. The first U.S. aces of the Vietnam War, Randy "Duke" Cunningham and Willie Driscoll, received no official Topgun training, but had, during F-4 training with VF-121, flown against Topgun instructors.

It was not until after the war in Vietnam ended that the Air Force initiated a robust DACT program with dedicated aggressor squadrons. The Air Force also initiated a program to replicate an aircrew's first ten combat missions known as Red Flag, and the USAF Weapons School also increased emphasis on DACT. 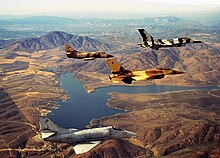 The 1970s and 1980s brought the introduction of the F-14 Tomcat and the F/A-18 Hornet as the primary fleet fighter aircraft flown by students, while Topgun instructors retained their A-4s and F-5s, but also added the F-16 Fighting Falcon to better simulate the threat presented by the Soviet Union's new 4th-generation MiG-29 'Fulcrum' and Su-27 'Flanker' fighters. However, the specially built F-16N developed cracks in the airframe and was retired.

Largely due to the end of the Cold War in the 1990s, the Topgun syllabus was modified to include more emphasis on the air-to-ground strike mission as a result of the expanding multi-mission taskings of the F-14 and F/A-18. In addition, Topgun retired their A-4s and F-5s in favor of F-16s and F/A-18s in the Aggressor Squadron.

In 1996, the transfer of NAS Miramar to the Marine Corps was coupled with the incorporation of Topgun into the Naval Strike and Air Warfare Center (NSAWC) at NAS Fallon, Nevada. [3]

In 2002, the Navy began to receive 14 F-16A and B models from the Aerospace Maintenance and Regeneration Center (AMARC) that were originally intended for Pakistan before being embargoed. These aircraft (which are now designated F-16N/TF-16N) are operated by the Naval Strike and Air Warfare Center (NSAWC) for adversary training and, like their F-16N predecessors, are painted in exotic schemes.

In 2011, the Topgun program was inducted into the International Air & Space Hall of Fame at the San Diego Air & Space Museum. [19] 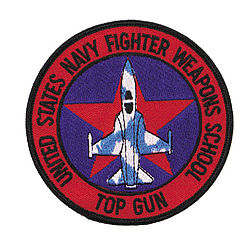 Topgun conducts four "Power Projection" classes a year. Each class lasts nine weeks and consists of nine Navy and Marine Corps strike fighter aircraft—a mix of single-seat F/A-18Cs and Es, and two-seat F/A-18Ds and Fs. The Topgun course is designed to train already experienced Navy and Marine Corps aircrews at the graduate level (although it is currently not a regionally or nationally accredited educational program) in all aspects of strike-fighter aircraft employment, which includes tactics, hardware, techniques and the current world threat for air-to-air and air-to-ground missions. The course includes eighty hours of lectures and twenty-five sorties that pit students against Topgun instructors. When a pilot or WSO completes the Topgun course he/she will return as a Training Officer carrying the latest tactical doctrine back to their operational squadron or go directly to an FRS squadron to teach new aircrews. SFTIs can also become instructors themselves at Topgun later in their career. Each year, a small number of aircrews do not meet Topgun's standards and are dropped from the course.

Topgun trains four to six Air Intercept Controllers in each class on advanced command, control, and combat communication skills. They are completely integrated into the course and participate in most of the training missions. These "AIC" students, some of whom are E-2C/D Hawkeye Naval Flight Officers, go back to their Carrier Air Wings after graduation and are given the responsibility of training all the air controllers and fighters in their Carrier Strike Groups in the art of air intercept control.

Topgun holds a Strike-Fighter Tactics Refresher Course (also known as "Re-Blue") once a year, usually in the fall, bringing current fleet SFTIs back to Fallon for a two-day refresher, updating Topgun's recommendations.

The Topgun course has changed over time. In the 1970s, it was four weeks long; in the 1980s, five weeks. The final F-4 Phantoms went through the class in March 1985, and the final F-14 Tomcats in October 2003. Programs formerly run by Topgun that have been transferred to other commands or discontinued include Fleet Air Superiority Training (FAST) and Hornet Fleet Air Superiority Training (HFAST): coordinated programs of academics and simulators, training fighter pilots and WSOs in Maritime Air Superiority in the carrier group arena.

Topgun was made famous by the 1986 motion picture Top Gun, starring Tom Cruise.