From Wikipedia, the free encyclopedia
(Redirected from Sugar mill)
Factory that processes sugar cane to produce raw or white sugar
Not to be confused with Sugar refinery. 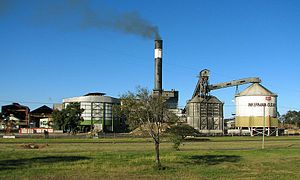 A sugar cane mill is a factory that processes sugar cane to produce raw or white sugar.

The term is also used to refer to the equipment that crushes the sticks of sugar cane to extract the juice. [1] 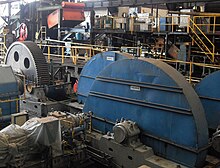 The mill house of a cane sugar mill

There are a number of steps in producing raw sugar from cane:

These processing steps will produce a brown or raw sugar. Mill white sugar also known as plantation white sugar can be produced by introducing some form of colour removal process (often sulphitation) between the juice clarification and the juice evaporation stages mentioned above. [2] The raw sugar produced is often refined to produce white sugar. This sugar refining can be done either at a completely separate factory or at a back-end refinery which is attached to the raw sugar factory. 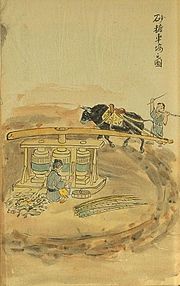 There are two processes for extracting juice from cane: [3] [4]

Juice extraction by milling is the process of squeezing the juice from the cane under a set mills using high pressure between heavy iron rollers. Those mills can have from 3 up to 6 rolls; every set of mills is called a tandem mill or mill train. To improve the milling extraction efficiency, imbibition water is added at each mill. Hot water is poured over the cane just before it enters the last mill in the milling train and is recirculated up to reach the first mill. The juice squeezed from this cane is low in sugar concentration and is pumped to the preceding mill and poured onto the cane just before it enters the rollers, the juice from this mill is the same way pumped back up the milling train. Mixed juice (that is to say cane juice mixed with the water introduced at the last mill) is withdrawn from the first and second mills and is sent for further processing. Milling trains typically have four, five or six mills in the tandem. To improve the milling extraction performance before the cane reaches the first mill, knife and shredder preparation equipment is normally used.

Sugarcane diffusion is the process of extracting the sucrose from the cane with the use of imbibition but without the squeezing by mills. Shredded cane is introduced into the diffuser at the feed end, Hot water is poured over the shredded cane just before the discharge end of the diffuser. The hot water percolates through the bed of cane and removes sucrose from the cane. This dilute juice is then collected in a compartment under the bed of cane and is pumped to a point a little closer to the feed end of the diffuser and this dilute juice is allowed to percolate through the bed of cane. At this point the concentration of sucrose in the cane is higher than the concentration of sucrose in the dilute juice just mentioned and so sucrose diffuses from the cane to the juice, this now slightly richer juice is pumped back up the diffuser and the process is repeated, typically, 12 to 15 times (compared with the four to six times for the milling process)

Sugar cane juice has a pH of about 4.0 to 4.5 which is quite acidic. Calcium hydroxide, also known as milk of lime or limewater, is added to the cane juice to adjust its pH to 7. The lime helps to prevent sucrose's decay into glucose and fructose. The limed juice is then heated to a temperature above its boiling point. The superheated limed juice is then allowed to flash to its saturation temperature: this process precipitates impurities which get held up in the calcium carbonate crystals. [5] The flashed juice is then transferred to a clarification tank which allows the suspended solids to settle. The supernatant, known as clear juice is drawn off of the clarifier and sent to the evaporators.

The clarified juice is concentrated in a multiple-effect evaporator to make a syrup of about 50 percent sucrose by weight.

This syrup is further concentrated under vacuum in a vacuum boiling pan [a] until it becomes supersaturated, finely ground sugar crystals suspended in alcohol are introduced into the vacuum pan as seed crystals around which sucrose is deposited and these crystals then grow in size until they are ready to be discharged (typically about 1 millimetre (0.039 in))

A number of boiling schemes are possible, the most commonly used boiling scheme is the three-boiling scheme. This method boils the sugar liquors in three stages, called A-, B- and C-.

A batch type sugar centrifuge separates the sugar crystals from the mother liquor. These centrifuges have a capacity of up to 2,200 kilograms (4,900 lb) per cycle. The sugar from the centrifuges is dried and cooled and then stored in a silo or directly packed into bags for shipment.

The mother liquor from the first crystallization step (A-product) is again crystallized in vacuum pans and then passed through continuous sugar centrifuges. The mother-liquor is again crystallized in vacuum pans. Due to the low purity the evapo-crystallization alone is not sufficient to exhaust molasses, and so the so-called massecuite (French for “boiled mass”) is passed through cooling crystallizers until a temperature of approx. 45 °C (113 °F) is reached. Then the massecuite is re-heated in order to reduce its viscosity and then purged in the C-produced centrifugals. The run-off from the C-centrifugals is called molasses.

The spun-off sugar from the B-product and C-product centrifuges is re-melted, filtered, and added to the syrup coming from the evaporator station.

Energy in the sugar mill

The remaining fibrous solids, called bagasse, are burned for fuel in the mill's steam boilers. These boilers produce high-pressure steam, which is passed through a turbine to generate electrical energy ( cogeneration). The exhaust steam from the turbine is passed through the multiple effect evaporator station and used to heat vacuum pans in the crystallization stage as well as for other heating purposes in the sugar mill.

As in many other industries factory automation has been promoted heavily in sugar refineries in recent decades. The production process is generally controlled by a central process control system, which directly controls most of the machines and components. Only for certain special machines such as the centrifuges in the sugar house decentralized PLCs are used for security reasons. [6]

Sugar mills first appeared in the medieval Islamic world. [7] They were first driven by watermills, and then windmills from the 9th and 10th centuries in what are today Afghanistan, Pakistan and Iran. [8]