The area surrounding the old monument was rededicated as Harriet Tubman Grove in March 2018. [3]

The Jackson and Lee Monument was the first double equestrian statue in the United States. [4] Artist Laura Gardin Fraser was the only woman sculptor selected out of five other men to create the monument. Notable architect John Russell Pope was commissioned to design the base of the monument.

Funding for the statue was secured by Colonial Trust Company owner J. Henry Ferguson before he died in 1928. Ferguson provided $100,000 for the erection of the monument. [5] It was dedicated in 1948 in a ceremony at which Governor William Preston Lane Jr. and Mayor Thomas D'Alesandro Jr. spoke. [6]

The monument was located on the west side of the Wyman Park Dell along Art Museum Drive from its dedication until its removal by the Baltimore City Government. 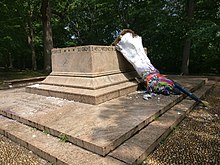 After the 2015 Charleston church shooting, Mayor Stephanie Rawlings-Blake organized a commission to evaluate removal of the city's four confederate monuments. [7] In January 2016, the commission decided that the Jackson and Lee Monument, along with William Henry Rhinehart's Roger B. Taney Sculpture in Mount Vernon Place would be removed. [8]

On August 15, 2017, the Baltimore City Council voted unanimously to deconstruct these monuments. [9] The Jackson and Lee Statue was subsequently removed by Whiting Turner construction on August 16, 2017, but the base remains intact. [10] Activists replaced the monument with a rendition of a pregnant African-American woman, created by artist Pablo Machioli, which was destroyed shortly thereafter. The pedestal was also repeatedly vandalized with politically motivated graffiti. [11]

The base of the sculpture featured the following inscription: [4]

SO GREAT IS MY CONFIDENCE IN / GENERAL LEE THAT I AM WILLING TO / FOLLOW HIM BLINDFOLDED / STRAIGHT AS THE NEEDLE TO THE POLE / JACKSON ADVANCED TO THE EXECUTION / OF MY PURPOSE
(West steps:) THE PARTING OF GENERAL LEE AND / STONEWALL JACKSON ON THE EVE / OF CHANCELLORSVILLE
(East steps:) GIFT OF J. HENRY FERGUSON OF MARYLAND.
(North steps:) THEY WERE GREAT GENERALS AND/ CHRISTIAN SOLDIERS AND WAGED / WAR LIKE GENTLEMEN.