From Wikipedia, the free encyclopedia
Town in Massachusetts, United States

Main Street at the Stoneham Theatre

Stoneham /ˈstoʊnəm/ is a town in Middlesex County, Massachusetts, nine miles (14.5 km) north of downtown Boston. Its population was 21,437 at the 2010 census. [1] Its proximity to major highways and public transportation offer convenient access to Boston and the North Shore coastal region and beaches of Massachusetts. The town is the birthplace of the Olympic figure-skating medalist Nancy Kerrigan and is the location of the Stone Zoo.

The earliest documented mention of the territory now called Stoneham dates to 1632 when, on February 7, Governor Winthrop and his party came upon this area. They found Spot Pond and ate their lunch on a place they called Cheese Rock, now known as Bear Hill. [2] Stoneham is situated on the traditional territory of the Wampanoag people. [3]

Stoneham was first settled by colonists in 1634 and was originally a part of Charlestown. The original colonists in the area were Whigs.[ citation needed] In 1678, there were six colonists with their families, all in the northeast part of the town, probably because of its proximity to the settlement in Reading (now Wakefield). [4]

By 1725, the population of the area, called "Charlestown End", had increased until there were 65 male inhabitants paying taxes; [5] however, they were miles away from the settlement in Charlestown and could not conveniently reach its church or school. For this reason, Captain Benjamin Geary and 53 other residents of the area petitioned Charlestown to allow them to be separated. The town refused their petition at first, but on December 17, 1725, the General Court passed an act to establish the new township of Stoneham, separating it from Charlestown, and releasing its residents from the obligation to pay taxes to Charlestown, provided that within two years they would erect a suitable church and hire a minister and a schoolmaster. [6] 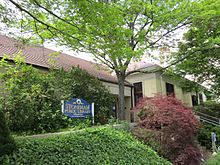 The town's first meeting-house was erected in 1726, and the first church was organized in 1729, with members being released from the congregations in Reading and Melrose to form it. In the same year, the town voted to raise £9 for the building of a school, and chose a committee to hire a schoolmaster. [7] Stoneham remained a small town during the colonial era. Traces of its colonial history are still to be seen in the Spot Pond Archeological District of the Middlesex Fells Reservation. During the Industrial Revolution, Stoneham prospered as a major shoe-manufacturing center.

See also: List of Massachusetts locations by per capita income

Stoneham is inside the Route 128 belt that delineates the core of metropolitan Boston. Public transportation is available in or near Stoneham. The tri-community greenway path goes through Stoneham accessible to walkers/bikers. The Oak Grove subway station is 3.8 miles (6.1 km) from Stoneham Center, in Malden, and is the northern terminus of the MBTA's Orange Line. Several commuter rail stations are in bordering communities of Melrose, Winchester, Wakefield, Reading, Medford, Woburn and Malden, each providing transportation to Boston's North Station. The MBTA's 132 bus route travels through Stoneham Center, offering transportation to the Orange Line at Oak Grove and Malden Station. And the MBTA's 325 Express Bus to downtown Boston offers limited service. Interstate 93 passes through Stoneham, and Route 128/ Interstate 95 passes just to the north of the town.

Stoneham is served by Boston television and radio stations, the Boston Herald, the Boston Globe and the Stoneham Independent newspaper. Stoneham has a community access television station, StonehamTV, which broadcasts locally produced content on Comcast, Verizon and RCN cable systems. [20]

The Nine O'clock Horn, or Nine O'clock Bell/Alarm, is a horn that goes off from the Stoneham Fire Station every day at 9 a.m. and 9 p.m. and is known by everyone who has lived in Stoneham for a period of time. There is very little actual record of the purpose of the horn, but it is most likely a remnant of a town curfew or when town bells used to keep time by ringing on the hour.

There have been a few occasions when the bell has not rung, including the September 11, 2001 attacks, and the Boston Marathon Bombing.

In addition to its high school sports programs at Stoneham High School, Stoneham is also has the Stoneham Sabers amateur team in the Yawkey Baseball League of Greater Boston. [22]

This audio file was created from a revision of this article dated 2009-04-24, and does not reflect subsequent edits.
()