The 760,000-square-foot (71,000 m2; 17-acre; 7.1 ha) facility was made possible by a $65 million donation in October 1999 to the Smithsonian Institution by Steven F. Udvar-Házy, an immigrant from Hungary and co-founder of the International Lease Finance Corporation, an aircraft leasing corporation. [2] The main NASM building, located on the National Mall in Washington, D.C., had always contained more artifacts than could be displayed, and most of the collection had been stored, unavailable to visitors, at the Paul E. Garber Preservation, Restoration, and Storage Facility in Silver Hill, Maryland. A substantial addition to the center encompassing restoration, conservation and collection-storage facilities was completed in 2010. Restoration facilities and museum archives were moved from the museum's Garber facility to the new sections of the Udvar-Hazy Center. [3]

Phase Two of the Udvar-Hazy Center will be dedicated to the behind-the-scenes care of the Smithsonian's collection of aircraft, spacecraft, related artifacts and archival materials. On December 2, 2008, the Steven F. Udvar-Hazy Center received a gift of $6 million for phase two from Airbus Americas Inc. — the largest corporate gift to the Smithsonian Institution in 2008. [6] 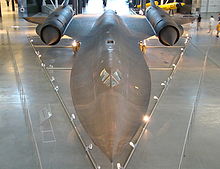 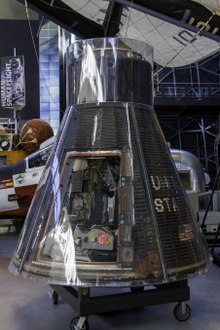 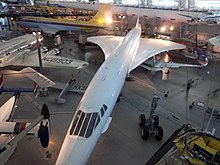 The Space Shuttle Discovery in the space wing of Udvar-Hazy.
Main article: List of aircraft in the Smithsonian Institution

The center was opened on December 15, 2003. The Udvar-Hazy Center displays historic aviation and space artifacts, especially items too large for the National Air and Space Museum's building on the National Mall, including: [5]

The museum is still in the process of installing exhibits, and 169 aircraft and 152 large space artifacts were on display as of May 2012, [5] and plans call for the eventual installation of over 200 aircraft. [15] The current list is maintained at the Objects On Display page of the Smithsonian Institution NASM Collections site.[ citation needed]

A number of events are held at the museum throughout the year. [16] These include lectures, book signings, sleepovers, and events for children. Some of the museum's larger events include Air & Scare for Halloween, [17] an open house, [18] and Innovations in Flight: Family Day and Outdoor Aviation Display. [19]

The center made its first media appearance in the 2009 film Transformers: Revenge of the Fallen. The center remained open while filming took place, although certain areas were closed. [20] The SR-71 that is on display in the museum was used as Jetfire, a Decepticon who switches sides to become an Autobot, in the film. In the film, it is referred to simply as the National Air and Space Museum.[ citation needed]