The Staten Island Yankees were a minor league baseball team located in the New York City borough of Staten Island from 1999 to 2020. Nicknamed the "Baby Bombers", the Yankees were the Class A Short Season affiliate of the New York Yankees and played in the New York–Penn League at Richmond County Bank Ballpark along the waterfront in St. George. The Yankees won six New York–Penn League championships (2000, 2002, 2005, 2006, 2009, and 2011).

On March 26, 2006, the Staten Island Advance reported that the teams' majority owners, the Getzler family, were considering selling their 51% share of the team, and were asking for between three and five million dollars. The New York Yankees purchased the Getzler's interest in the team and in return hired Mandalay Sports Properties to run the day-to-day operations of the team. Part of the agreement was that the New York Yankees and Mandalay become equal partners and Mandalay now owns 50% of the Staten Island Yankees. 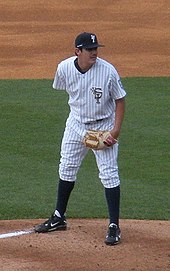 A pitcher for the Staten Island Yankees

In 2006, the Yankees were managed by Gaylen Pitts, noted for frequently being ejected from games. In a game on August 25, 2006, Pitts was ejected and then returned to the field in sandals after a batter was hit by a pitch in the 9th inning of a 21–6 victory over the Brooklyn Cyclones.

In 2007, the Yankees were managed by Mike Gillespie, who led the 1998 USC Trojans to a College World Series championship. Gillespie led the Baby Bombers to their third consecutive playoff appearance before losing to the Brooklyn Cyclones in 2007 NYPL Playoffs, 2 games to none.

Former Florida Gator coach Pat McMahon had managed the Yankees for the 2008 season.

Former major league catcher Josh Paul had managed the Yankees for the 2009 season and returned for the 2010 season.

Due to Dave Eiland taking a leave of absence, manager Josh Paul was summoned to fill in as the New York Yankees bullpen coach during which time former major leaguer Jody Reed filled in as the interim manager for the Staten Island Yankees. [6]

On June 20, 2016 the team launched a campaign to rename the organization starting with the 2017 season. On September 8, 2016, the potential names were whittled down to 5, with an online vote beginning on the team's website from that date; the candidate names were the Bridge Trolls, Heroes, Killer Bees, Pizza Rats, and Rock Pigeons. [7] Ultimately, the team decided to retain the Yankees moniker but to call itself the Staten Island Pizza Rats for select games as an alternate identity. [8] [9]

Prior to the 2020 season, it was announced that the team would be shuttered when the MLB/MiLB agreement ended at the conclusion of the 2020 season under a proposed plan calling for the Short Season Class A designation to be eliminated. [10] The start of the 2020 season was postponed due to the COVID-19 pandemic before ultimately being cancelled on June 30. [11] [12] On November 7, 2020, the New York Yankees announced that they were withdrawing from Staten Island, but they would seek to place a team from the independent Atlantic League at Richmond County Bank Ballpark in 2021. [13]

Since their inception in 1999 the Staten Island Yankees have amassed a total of 42 players who have reached the major leagues not including players who have played for the team while on a rehab assignment. [16]

The Following players have made rehab appearances with the Staten Island Yankees.

The original Staten Island Yankees Mascot was Scooter the "Holy Cow." [17] A combination of New York Yankees shortstop Phil "Scooter" Rizzuto and his commentating catch phrase "Holy Cow!" Scooter debuted for the Staten Island Yankees when the franchise relocated from Watertown, New York, in 1999. In summer 2003, the Baby Bombers debuted Scooter's sisters Red and Huckleberry (or "Huck"). [17] Scooter and his sisters were a staple at SI Yankee games, leading fan rallies and between-inning on-field games. The cows were known to have a The Three Stooges-like relationship in which Red and Huck often teamed up to trick and trap Scooter [17]