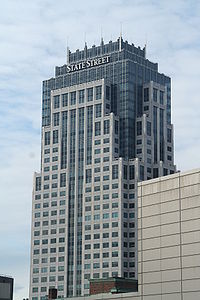 One Lincoln Street, the headquarters of the company, in Boston, Massachusetts (2006)

State Street Corporation is an American [3] financial services and bank holding company headquartered at One Lincoln Street in Boston with operations worldwide. It is the second-oldest continually operating United States bank; its predecessor, Union Bank, was founded in 1792. State Street is ranked 15th on the list of largest banks in the United States by assets. It is one of the largest asset management companies in the world with US$2.511 trillion under management and US$31.62 trillion under custody and administration. It is the second largest custodian bank in the world. [4]

The company is ranked 247th on the Fortune 500 as of 2019. [1] The company is on the list of the banks that are too big to fail published by the Financial Stability Board. [5]

The company is named after State Street in Boston, which was known as the "Great Street to the Sea" in the 18th century as Boston became a flourishing maritime capital. The company's logo includes a clipper to reflect the maritime industry in Boston during this time.

The company traces its roots to Union Bank, which received a charter in 1792 from Massachusetts Governor John Hancock. It was the third bank to be chartered in Boston and its office was at the corner of State and Exchange Streets. [9] [10] In 1865, Union Bank received a national charter and became the National Union Bank of Boston. The bank later built a headquarters at Washington and State streets. [11]

In 1966, the company completed construction of the State Street Bank Building, a new headquarters building, the first high-rise office tower in downtown Boston.

In 1972, the company opened its first international office in Munich.

In 1973, as a 50/50 joint venture with DST Systems, the company formed Boston Financial Data Services, a provider of shareholder record-keeping, intermediary and investor services, and regulatory compliance. More than 100 top staff from IBM were hired by State Street as it set about implementing IBM mainframe computer systems.

In 1975, William Edgerly became president and chief executive officer of the bank and shifted the company's strategy from commercial banking to investments and securities processing. [10]

In 1990, State Street Bank Luxembourg was founded, and as of 2018 [update] is the largest player in the country's fund industry by assets. [18]

In October 2008, the United States Department of the Treasury invested $2 billion in the company as part of the Troubled Asset Relief Program and in July 2009, the company became the first major financial firm to repay the Treasury. [23]

In 2010, the company acquired Mourant International Finance Administration. [24] It also acquired the securities services group of Intesa Sanpaolo for $1.87 billion. [25] In December 2010, the company announced that it would be retrenching 5% of its workforce and effectively reducing the hourly wages of remaining employees by 10% via increased standard work hours. [26]

In 2016, State Street launched a program called Beacon, focused on cutting costs and improving reporting technology. [30] Their main focus was to shrink their US workforce in order to bolster profits in excess of $2.5 billion (2018 figures).[ citation needed] Also in 2016, the company acquired the asset management business of General Electric. [31]

In 2017, the company announced that Jay Hooley, the chief executive officer of the company, would retire. [32]

In 2018, State Street completed its acquisition of Charles River Development, a Burlington, Massachusetts provider of investment management software. [33] The deal closed October 1, 2018, at a cost of approximately $2.6 billion that will be financed by the suspension of share repurchases and the issuing of common and preferred equity. [34] News of the acquisition led to a drop in State Street shares of nearly 10% with share prices remaining flat since the purchase. [35]

In January 2019, State Street announced that it planned to lay off 1,500 employees, increasing the number to 2,300 in July. [36] The company is shifting their workforce from the United States to countries like China, India and Poland and is operating under a hiring freeze. [36] Offsetting this is increased overseas hiring, resulting in a 3K+ net gain of employment. [37] [38]

In 2009, California alleged on behalf of its pension funds CalPERS and CalSTRS that State Street had committed fraud on currency trades handled by the custodian bank. [39] [40] In October 2011, two executives from State Street Global Markets left the company following charges over the pricing of a fixed income transaction. In April 2016, they were charged by the United States Department of Justice. [41]

On February 28, 2012, State Street Global Advisors entered into a consent order with the Massachusetts Securities Division. The Division was investigating the firm's role as the investment manager of a $1.65 billion (USD) hybrid collateralized debt obligation. The investigation resulted in a fine of $5 million (USD) for the non-disclosure of certain initial investors taking a short position on portions of the CDO. [42]

During the May 2012 annual shareholders meeting, chairman and chief executive Jay Hooley was shouted down on numerous occasions by protesters in relation to the outsourcing and other grievances. [43]

On January 18, 2017, State Street agreed to pay $64.6 million to resolve U.S. investigations into what prosecutors said was a scheme to defraud six clients through secret commissions on billions of dollars of trades. [44] [45]

In 2018 former employee of State Street, Edward Pennings was sentenced to six months in prison for his role in the scheme. [46]  Employee Ross McLellan was also sentenced in the United States to 18 months in prison. [47]

In March 2017, State Street Global Advisors commissioned a statue called Fearless Girl by Kristen Visbal and placed it temporarily in the Financial District, Manhattan, in front of the Wall Street icon Charging Bull. The statue is an advertisement for an index fund which comprises gender diverse companies that have a higher percentage of women among their senior leadership. [48] While some have seen it as an encouragement of women in business, some women criticized the statue as "corporate feminism" that violated their own feminist principles. [49] [50] [51] [52] In October 2017, the company paid $5 million to settle a lawsuit charging that it had paid certain female and African-American executives less than their male and European-American peers. [53]