From Wikipedia, the free encyclopedia
‹ The template Infobox recurring event is being considered for merging. ›

The State Fair of Texas is an annual state fair held in Dallas at historic Fair Park. The fair has taken place every year since 1886 except for varying periods during World War I and World War II. The 2020 State Fair was cancelled amid the COVID-19 pandemic. [6] It usually begins the last Friday in September and ends 24 days later. The fair claims to boast an annual attendance of over two million visitors through ticket scanning. [7] The State Fair of Texas is considered one of the best in America as well as Dallas' signature event although it has a long and troubled history. [8] [9] [10] [11]

The State Fair of Texas's opening day ceremonies are highlighted by the annual Friday parade rolling through downtown Dallas. [12] In 2019, the parade moved to Fair Park. [13] The fair also has a nightly parade called the Starlight Parade and a nightly light show called Illumination Sensation around the park's esplanade. [14] However, the start of the fair tends to be viewed by the residential neighbors in a negative light since the benefits are not seen to trickle down to them. [15] In fact, the blight created by the fair is so severe it depresses the real estate value of neighboring homes, which are already in a depressed neighborhood. [16] In addition, nearby businesses lose money while the fair is in session. [17]

Traditionally, the centerpiece of the fair has been the annual college football game between Oklahoma and Texas, nicknamed the Red River Rivalry (historically known as both the "OU-Texas Game" or "Texas-OU Game") and played in the Cotton Bowl at Fair Park. Also, the State Fair Classic, featuring Grambling State University and Prairie View A&M University, is played at the Cotton Bowl during the fair. In 2010, Baylor and Texas Tech played their game during the fair for the first time. During the opening weekend of the 2013 fair, Army and Louisiana Tech played in the only Heart of Dallas Classic at the Cotton Bowl; it was abandoned thereafter. The Texas State Fair Football Showdown took place on the third weekend of the 2018 and 2019 fair and featured Southern and Texas Southern. [18] In 2020, the Southern versus Texas Southern game is set to move to Arlington, Texas.

The State Fair of Texas is the only fair in the US to include a full auto show, dating back to 1913. [19] However, the Texas Museum of Automotive History was forced to pull out as a tenant who blames the fair for forcing it to close down during the annual event. [20]

The State Fair used to feature "Birds of the World" where several birds flew overhead. It was removed from the Fair lineup in 2014 and returned in 2019. The Texas Skyway is a gondola ride which only operates 24 days a year transports visitors around the fairgrounds. Its construction cost 5 million dollars. There is also a BMX bike show as well as dog and pig races. For children, puppet shows, Children's Medical Center Barnyard, and Story Time also take place inside the fair. [21]

In recent years, the fair has emphasized its reputation as an event featuring unique, albeit high-fat foods. It has been known for years for Fletcher's brand corny dogs even as a lawsuit was filed for the right to sell them outside of the fair. [22] Recent years have seen the introduction of new unusual deep-fried items, including deep-fried Oreos, deep-fried Twinkies, deep-fried s'mores, deep-fried pork ribs, fried cheesecake; deep-fried butter, fried avocados, deep-fried peanut butter, jelly, and banana sandwiches, and most recently a batter-based fried Coke. New foods in 2008 included chicken fried bacon and fried banana splits. For the 2012 fair, the Girl Scouts of Northeast Texas added the deep-fried Samoa cookie in honor of the 100th Anniversary of Girl Scouts of the US in 2012 and the Girl Scout 100th Anniversary Experience at the Texas Hall of State at the fair in the same year. [23] People travel all across the world to attend the unique State Fair of Texas including former talk show host, Oprah. [24] In 2019, the fair introduced a Buffalo chicken chimichanga.

In its modern incarnation, the State Fair of Texas was charted as a private corporation by local businessmen. It was an immediate success and attracted thousands of people. However, in 1904 a series of events led to a financial crisis and not enough income was available to keep the fair running. Therefore, the businessmen sold it to the city of Dallas with the agreement that 24 days during the fall would be set aside annually for the fair and exhibition. [25]

On February 10, 1942, a five-alarm blaze "raged unchecked for an hour in the automobile building at the State Fair park" causing damage estimated at several hundred thousand dollars. One fireman was hospitalized after being overcome with smoke and a half dozen others were given treatment at the scene. "Roy Rupard, secretary of the State Fair association, said the loss was covered by insurance." [26]

Its 212-foot (65 m) Texas Star Ferris wheel was the largest in North America when it debuted in October 1985, just months before the Texas Sesquicentennial. It has since been dwarfed by Ferris wheels in Las Vegas and Orlando. [19] [29]

In addition, the fair once had a “Colored People’s Day,” “ Ku Klux Klan Day” and, as recently as the 1980s, a day dedicated to the Confederacy. [30] In the 1960s, the fair looked at market research showing that many white fairgoers were frightened by seeing black people on their way into the fair leading to an aggressive eminent domain campaign to buy nearby homes to convert the land into parking lots. [31]

In 2017, Foundation for Community Empowerment commissioned a major report laying a major portion of blame against how the State Fair of Texas has hindered development at and around Fair Park. [33]

In 1955, Juanita Craft organized a protest of the State Fair of Texas against its policy of admitting blacks only on "Negro Achievement Day." [34]

The State Fair in 1966 commissioned a report on the redevelopment of the fair, which concluded that the land around Fair Park should be `bought up and turned into a paved, lighted, fenced parking lot" that would `eliminate the problem from sight'. "If the poor Negroes in their shacks cannot be seen, all the guilt feelings…will disappear, or at least be removed from primary consideration".

The State Fair was criticized in October 2014 for spending over $5 million on attorneys fees to two insiders. [35]

Despite a $30 million investment in Summer Adventures, the event was shuttered after just one season. [36] 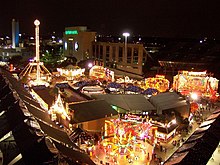 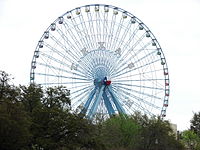 The economics, finances and management of the State Fair of Texas is a matter of public concern and study. The five main areas of concern are:

Staff of the State Fair have traditionally reported that attendance at the fair runs in the vicinity each year of between 3 and 3.5 million people. These figures were disputed in an April 2016 study published by Tom Kelly, Ph.D, a professor of Economics at Baylor University and the Director of Baylor University Center for Business and Economic Research, along with Bennet Hickok, an Economics student at Baylor. The Kelly/Hickok report argues that the attendance at the fair is about 1.5-1.7 million visitors a year, or about half of what state fair staff reported it to be. [59] According to the 2017 State Fair of Texas Annual Report, [60] the Fair attracted a total of 2,250,433 attendees during the 2017 event with roughly 93,000 daily guests. The total annual reported attendance for 2018 dropped to 2,049,119 with a net operating revenue loss of $3,199,044 for the year. [1]

How excess revenue is spent

The State Fair has a lease with Fair Park, the terms of which require that any profit or excess revenue it generates be spent "for the development and enhancement of Fair Park and the Fair". In May 2016, the State Fair released a list of capital projects for the past 10 years, detailing how the fair had spent their excess revenue. According to media reports, 90% of excess revenue was spent on projects that solely benefited the State Fair. A survey of Fair Park revealed out of the 277 acres available, 200 are covered in asphalt or concrete, compared to 10 acres of green space. [64]