From Wikipedia, the free encyclopedia
Place in Texas, United States

The Stafford MSD area is served by the Houston Community College System.

In 2018, the school district was rated an overall B by the Texas Education Agency. [1] 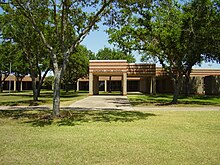 In 2014 the district was considering whether it should install artificial turf in its sports fields. At the time it had residual funds from a $49.9 million bond passed in 2011. As of 2016 the school district has had artificial turf inside its stadium. [7]