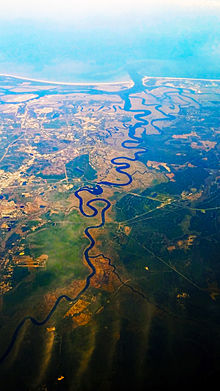 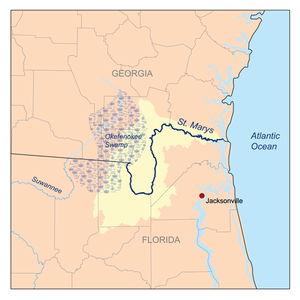 The St. Marys River (named Saint Marys River by the United States Geological Survey, [1] and sometimes misspelled as St. Mary's River) is a 126-mile-long (203 km) [2] river in the southeastern United States. From near its source in the Okefenokee Swamp, to its mouth at the Atlantic Ocean, it forms a portion of the border between the U.S. states of Georgia and Florida. The river also serves as the southernmost point in the state of Georgia.

The St. Marys River rises as a tiny stream, River Styx, flowing from the western edge of Trail Ridge, the geological relic of a barrier island/dune system, and into the southeastern Okefenokee Swamp. Arching to the northwest, it loses its channel within the swamp, then turns back to the southwest and reforms a stream, at which point it becomes the St. Marys River. Joined by another stream, Moccasin Creek, the river emerges from the Okefenokee Swamp at Baxter, Florida/Moniac, Georgia. It then flows south, then east, then north, then east-southeast, finally emptying its waters into the Atlantic, near St. Marys, Georgia and Fernandina Beach, Florida.

On 6 July 1805 Lieutenant Robert Pigot of HMS Cambrian arrived off the harbour in the French privateer schooner Matilda, which the British had captured three days earlier. On 7 July Pigot took Matilda twelve miles up the St Marys River to attack three vessels reported to be there. Along the way militia and riflemen fired on Matilda. Eventually the British reached the three vessels, which were lashed in a line across the river. They consisted of a Spanish privateer schooner and her two British prizes, the ship Golden Grove and the brig Ceres, which the Spanish privateer had captured some two months earlier. The Spaniards had armed Golden Grove with eight 6-pounder guns and six swivels, and given her a crew of 50 men. The brig too was armed with swivels and small arms. The Spanish schooner carried six guns and a crew of 70 men. [3]

Pigot engaged the vessels for an hour, and then after Matilda had grounded, took his crew in her boats and captured Golden Grove. The British then captured the other two vessels. Lastly, Pigot fired on a group of 100 militia, with a field gun, dispersing them. The British had two men killed, and 14 wounded, including Pigot, who had received two bullet wounds to head and one to a leg. A crowd of Americans on the Georgia side of the river watched the entire battle. [3]