The Metropolitan Police Department of St. Louis (SLMPD), is the primary law enforcement agency for the City of St. Louis, The department is accredited through the Commission on Accreditation for Law Enforcement Agencies (CALEA). The current Commissioner of Police is Colonel John Hayden Jr., who was named to the position on December 28, 2017. [6]

The Metropolitan Police Department was established in 1808, five years after St. Louis became part of the United States. The department was created with only four officers, who received no pay. Able-bodied men age 18 and older were required to patrol for four months of the year. This was the only police system for the next 10 years. Refusal to serve on patrol carried a fine of $1. [7]

In 2013, CALEA recognized the Metropolitan Police Department with it distinguished Tri-Arc Award. The Tri-Arc Award is reserved for those police agencies that have successfully accredited their law enforcement services, police academy and communications division. Only six agencies in the world have achieved this status.

In 2018, the composition of the department's total personnel was:

Officers are represented by the: St. Louis Police Officers Association (SLPOA). The St. Louis Ethical Society of Police (ESOP), formerly known as St. Louis Black Police Officers Association until 1975, represents African American police officers by providing legal counsel and other benefits; however, the SLPOA is the only recognized bargaining unit for officers. [10] SLPOA employs author and decommissioned Arnold police officer Jeff Roorda as business manager. In the 2017 city mayoral election, incumbent Lyda Krewson called for Roorda to be fired due to social media comments directed at candidate Tishaura Jones and declared that he would not be welcomed in her office if elected. [11]

The Metropolitan Police Department is composed of five bureaus:

The Commissioner serves as the senior sworn member of the SLMPD. John Hayden Jr. is the 35th individual to hold the post, which prior to 1806 was known as the Chief Inspector and that as Chief of Police and after that Commissioner of Police. [13]

The Commissioner of Police reports directly to the Mayor of St. Louis .

The rank of Major is the third-highest rank in the Department, reporting directly to a Deputy Chief. Each Major serves as a member of the Senior Command staff and assists each Lieutenant Colonel in managing civilian and commissioned personnel within their assigned areas. [15]

The Department is divided into four bureaus [17] which are typically commanded by a deputy chief (such as a Lieutenant Colonel or a Police Major). The bureaus fit under four umbrellas: Investigative Services,Professional Standards, and Specialized Enforcement and Community Policing . Bureaus are often subdivided into smaller divisions and units

The Homicide Detectives of SLMPD will be featured in A&E's reality series The First 48. [18]

In July 2016, the Metropolitan Police Department unveiled Operation Polar Cops ice cream truck. The truck is operated by the Community Engagement/Organizational Development Division (CEODD) and provides free ice cream treats at various locations throughout the City of St. Louis. The mission of Operation Polar Cops is to cultivate positive interactions between our officers and the citizens we serve. [19] 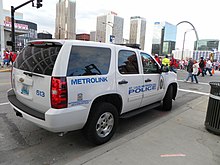 From April 28, 1836, to January 24, 2019, the Officer Down Memorial Page reported that 170 officers in the St. Louis Metropolitan Police Department died in the line of duty, [21] 89 of them from gunfire, [22] 38 from automobile-related incidents, and three from heart attacks. [22] Many families of those killed in the line of duty get support from BackStoppers, a local charity.

The causes of death are as follows:

The Force Investigative Unit (FIU) was established in September 2014 as the entity responsible for the criminal investigation of all officer-involved shootings. The FIU investigates all officer-involved shootings occurring within the City of St. Louis involving commissioned officers of the Metropolitan Police Department, as well as commissioned officers of any other jurisdiction. Before the initiation of the FIU, the department researched and visited several other police departments to ensure the best policies and practices were implemented. The FIU consists of a lieutenant and four detectives dedicated solely to investigating officer-involved shootings. The team responses directly to the scene of each incident, allowing detectives to conduct a thorough investigation of the case. Under the new policies, once the FIU's investigation concludes, the case is then turned over to the Circuit Attorney's Office for review. [25]

The Canine Unit deploys highly trained dog handlers and their canine partners to conduct searches and apprehend felony suspects throughout the St Louis City area. K-9 personnel are deployed around-the-clock, seven days a week. They are available to assist any SLMPD division with searches for felony suspects. Two K-9 officers have also been trained in search and rescue operations using dogs. [26]

The Metro Air Unit consists of one St. Louis County Police Department and one Metropolitan Police sergeant; four St. Louis County and four Metropolitan St.Louis police officers, along with one St. Charles County deputy. The Unit is equipped with five helicopters utilizing the latest in night vision and GIS technology, and one fixed wing aircraft. [27]

The sanctity of human life is paramount and SWAT officers will make every attempt to preserve life.

Three Saint Louis police officers were charged with felony assault against an undercover police officer during the 2017 Saint Louis protests, with an additional fourth police officer, Bailey Colletta, being charged with providing false testimony to a grand jury. [34] The undercover officer Luther Hall, according to the indictment, had been extensively assaulted by the three officers resulting in an injured tailbone, two herniated discs, and a jaw injury that prevented Hall from eating resulting in a twenty-pound weight loss. According to the prosecutors office these injuries were sustained by Hall after officers Myers, Hays, and Boone used excessive force in the form of kicking Hall and beating him with their police batons. [35]

In 2019 a controversy ensued regarding the existence of a list of 28 officers in the Metropolitan Department that were to be excluded from acting as witnesses in future prosecutions due to a history of misconduct. [36] This list was created by circuit attorney Kimberly M. Gardner's office. [36]

On January 24, police arrived at the residence of SLMPD officer Nathaniel Hendren following reports of gunshots, upon arrival police found 24-year-old officer Katlyn Alix fatally shot in the chest, following an alleged game of Russian roulette. [37] Saint Louis circuit attorney Kimberly M. Gardner criticized the investigation, stating that the department was obstructing the investigation of the shooting, claiming investigators refused to allow a sample of Officer Hendren's blood be tested for alcohol and other substances. [38] [39] [40] St. Louis Metropolitan Police Commissioner John Hayden Jr. responded to criticism of the investigation as unfounded. [41]

In June 2019 officers and employees from numerous police departments in the United States were found to have participated in a number of private groups on Facebook that shared content that was described as racist, [42] violent, and Islamophobic. [43] This information was published online by the Plain View Project, which had viewed and documented the social-media accounts of 2,900 officers from eight separate departments, finding twenty percent of those users posted bmaterial that was determined to meet the threshold of being offensive. [44] At least 22 officers in the Metropolitan department were found to have participated in the closed-groups, St. Louis Circuit Attorney Kimberly M. Gardner stated that these officers would be added to a list of officers who have been determined to be unable to provide witness testimony in criminal prosecutions. [45]

Former St. Louis police officer William C. Olsten was charged with three counts of felony third-degree assault on July 17, 2019 for allegations of pepper-spraying three protesters outside of Busch Stadium in 2017 against the acquittal of Officer Jason Stockley, [46]