From Wikipedia, the free encyclopedia
(Redirected from Sprinter (San Diego))
This article is about the rail service in Southern California. For the family of diesel multiple unit trains in regular service in Great Britain, see British Rail Sprinter. For the diesel multiple units built by Goninan for use by V/Line in Victoria, Australia, see V/Line Sprinter. For the 2009 Dutch EMU, see NS Sprinter Lighttrain. For the 1975 Dutch EMU, see NS SGMm. 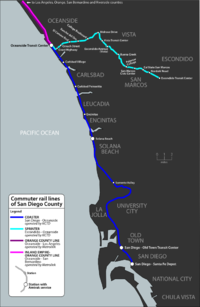 Sprinter map (with other lines included)

A 2007 study by the San Diego Association of Governments (SANDAG) predicted that the Sprinter would reduce road trips by 5,000 a day (a round trip by car would be two road trips). It also predicted over 11,000 riders (trips) per day by the end of the first year. [8] Ridership numbers did climb after opening, reaching just under 8,000 people per day as of March 2008. [9] Average weekday ridership for FY2018 was approximately 8,300. [1]

The Sprinter is the first passenger train service along the Escondido Branch since the Santa Fe Railroad discontinued passenger service in 1946. Originally built in 1888, the entire line had to be rebuilt to accommodate more traffic and be elevated because the line runs along a river. [10]

The funding for Sprinter originated with the TransNet Tax (Proposition C) measure passed by San Diego County voters in 1987 to relieve traffic congestion. A third of the tax was dedicated to mass transit. [11] [12] The $477 million project also was funded through a $152 million Full Funding Grant Agreement from the Federal Transit Administration. [10]

While the DMUs are not much narrower than freight cars, the space for employees hanging at the sides of cars considerably increases the free space required, and gangways were designed into the stations that fold up after end of service to allow the BNSF trains plus employees at their sides to pass through. At the eastbound side of the Escondido Avenue platform, the tracks curve so sharply that a gap existed between the outside edges of the gangway and the side of the DMU. The California Public Utilities Commission stated that such a gap is unsafe, and as a result, the Eastbound platform at Escondido Avenue was not used for six months after the opening of the Sprinter. On September 12, 2008, the station was completed and on September 15, 2008, the station became operational.

Sprinter was the least expensive rail project per mile of 10 rail projects built or planned in California in 2005. [16] American Public Works Association (APWA) awarded Sprinter the Transportation Project of the Year for projects valued over $75 million. [16]

Due to its shared right-of-way with freight trains serving businesses in Escondido, the Sprinter platforms had to be set back from the tracks a sufficient distance to provide enough room for employees riding on the sides of freight cars.[ citation needed]

In addition, riders can buy 'passes' (e.g. Regional 24-Hour Pass, Regional 30-Day Pass) which allow for unlimited travel not only on the Sprinter, but on other NCTD and MTS systems, such as the San Diego Trolley, and Breeze and MTS buses, for the duration of that pass. Rides on those systems, plus the Coaster commuter rail, and express buses, requires a "RegionPlus" pass.

In September 2008, SANDAG introduced a new contactless "Compass Card", made possible by Cubic Transportation Systems, Inc.. The "Compass Card" allows passengers from MTS and NCTD to store regional transit passes and cash value on a rewriteable RFID card. Customers can purchase passes and add cash value on the Internet or at any ticket vending machine. When a customer boards a bus that customer simply taps the Compass Card on the "Validator", usually located near or on the farebox. The LED display then lights resembling those of a stoplight, and the LCD display then shows text regarding the passenger's fare account. When boarding rail vehicles the Validators are located on the platform, and the same process is performed to board the train.

Sprinter service is operated with Desiro-class diesel multiple units (DMU) manufactured by Siemens in Germany and widely used by main-line regional railways. Twelve married pairs of Siemens VT642 Desiro DMUs were delivered to the Escondido Transit Center in August 2006. The vehicles were in acceptance testing in California during the early part of 2007. The passenger trains are not FRA-compliant for operation in association with freight trains; therefore freight operations on the route are not permitted during passenger operations. For this reason some publications, including the American Public Transportation Association, refer to this line as light rail but it does not conform with the usual understanding of that term.

Additionally, NCTD would like to implement Sprinter Express train service that would stop at only the five stations (Oceanside Transit Center, El Camino Real, Vista Transit Center, San Marcos Civic Center, and Escondido Transit Center) with the greatest ridership along the route. [5] The Express service would use freight track east of San Marcos Civic Center station to bypass a station and an eastern portion of the regular route in order to further reduce travel times between termini. [5]

The Sprinter has encountered some dissatisfaction in northern San Diego County. For example, business owners in Oceanside have attributed flooding in November 2007 and January 2008 [21] to the Sprinter, since its construction raised railroad beds and narrowed creeks. Some have also criticized the limited schedule. [22] In response to the limited schedule, NCTD expanded Friday and Saturday Night service in 2011, the last trips leaving out of Escondido (Westbound) at 10:33pm and out of Oceanside (Eastbound) at 11:33pm. [17]

On March 11, 2008, just two days after the first passengers were carried, a westbound Sprinter train struck a man who was lying on the tracks under a State Route 78 bridge in San Marcos. It was not immediately clear if the man was aware of the approach of the train. However, the man, who was covered by a sleeping bag at the time he was struck, spoke of suicide while in the emergency room. [23]

On March 23, 2012, a man was struck by a westbound Sprinter train at the West Mission Road and North Pacific Street crossing. The victim's death was ruled a suicide by the San Diego County medical examiner's office. The operator of the train applied the brakes and sounded the horn, but was unable to avoid the collision. The victim died at the scene. [24]

On February 28, 2013, the California Public Utilities Commission conducted an inspection of the Sprinter vehicles. During that inspection, the CPUC discovered accelerated patterns of wear on the central axle brakes of all 12 vehicles. As a result, on March 8, 2013, NCTD suspended service on the entire line. NCTD established bus replacement service for the duration of the Sprinter service interruption. [25] The Sprinter resumed regular service on May 18, 2013, with the last day of the supplemental express bus service on May 24. [26]