From Wikipedia, the free encyclopedia
For other uses, see Spring break (disambiguation).
A recess in early spring at universities and schools in various countries around the world 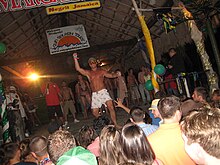 Spring break is a vacation period in early spring at universities and schools which started during the 1930s in the United States and is now observed in many other countries as well. [1] Spring break is frequently associated with extensive gatherings and riotous partying in warm climate locations such as Daytona Beach, Florida and Cancun, Mexico, attended regardless of participants' educational standings.

Spring break is an academic tradition in various mostly western countries that is scheduled for different periods depending on the state and sometimes the region.

In Japan, the spring break starts with the end of the academic year in March and ends on April 1 with the beginning of a new academic year.

In Kuwait, the spring break is between the two academic or school semesters, usually in December or January, but could last until early February. It is usually a 2 or 3-week break, however, there is no fixed date for it, as the date is adjusted in accordance with the Lunar or Hijri calendar, as it is the case for almost all Arab and Muslim nations.

In South Korea, the spring break starts in mid-February (the end of the academic year) and ends on March 1 (a national holiday) with the beginning of a new academic year.[ citation needed]

In the Czech Republic, only primary and secondary school students have a spring break. The break is one week long and the date of the break differs from county to county to avoid overcrowding of the break destinations in the Czech Republic (Czechs usually travel to the mountains to ski there). The counties are divided into six groups, each group containing counties evenly distributed across the country. The first group starts the holiday on the first Monday of February, the last group starts the holiday five weeks later (usually in early March). The last group of counties becomes the first one to have the spring break the next year.

Before 2017, the spring break in Georgia was typically an Easter holiday, lasting from Thursday to Tuesday in the Holy Week. In 2017, the new Minister of Education and Science of Georgia Aleksandre Jejelava made a new reform by which, students of preschools, elementary & high schools as well as colleges and universities get six days of holiday in March, lasting from March 8 to March 15, for people to go on winter vacations or do other activities.

In Germany, universities typically schedule a semester break of five to eight weeks around March. The Whitsun ( Pentecost) holidays around late May or early June are also considered a spring break. [2]

In Greece, spring break takes place during the Holy Week and the one after it.[ citation needed]

In Portugal, spring break is mostly known as "Easter Holidays" and it gives two weeks to all students around the country.

Before 1917 there was an Easter Break in schools. In the Soviet Union, spring break was always from 24 to 31 of March. Now, many schools in Russia still have the spring break, but the exact date is decided by the school itself. In the majority of cases it is set in the middle of April. Also, the public holidays in May, connected with Labour day and Victory day, can be an accurate equivalent of the spring break.

Slovakia gives a week-long break to its elementary school and secondary school students in the months of February and March. The break is one week long and the date of the break differs from county to county to avoid overcrowding of the break destinations in the Slovak Republic. The counties are divided into three groups, the first group starts the holiday on the end of February, the last group starts the holiday two weeks later (in early March).

There is, as well, another shorter Easter break which starts on Holy Thursday and ends on next Tuesday.

In Spain, there is not a spring break. Instead, the Holy Week is celebrated and students usually have holidays during these days.

The Easter break in the United Kingdom is from one to two and a half weeks (depending on the local council and school policy) for primary and high schools, and for two to four weeks for university students, and fits around Easter.

Canadian provinces give a one or two week-long break to its elementary school and secondary school students in the month of March, with the time varying from province to province; New Brunswick and Quebec, for example, place their March breaks during the first week of March; Ontario, Nova Scotia, and British Columbia schedule theirs during the second or third week; the break in Alberta and Manitoba usually occurs in the last week of March. In Canada, spring Break for post-secondary students is called 'reading week' or 'reading break,' depending on the duration. However, the formal title of Mid-term Break has been the preferred generic term. Reading Week in Canada usually occurs in the month of February, usually coinciding with Family Day.

In primary and secondary school, this break is called 'March break' and in university/college it is usually 'reading week.' Neither example is commonly associated with the party culture of American spring break, though many American students visit Canada during their spring break, which occurs later, to take advantage of looser Canadian laws surrounding alcohol and cannabis.

In Jamaica, the spring break starts in the first week of Good Friday. The break may range from one week to two weeks, often two. This break starts depending on which month the Easter holiday begins, March or April.

In Mexico, spring break takes place during the Holy Week and the one after it.[ citation needed]

In the United States, spring break at works, universities and colleges can occur from March to April, depending on term dates and when Easter holiday falls. Usually, spring break is about one week long, but many K–12 institutions in the United States schedule a one-week-long break known as "Easter Break," "Easter Holidays", or "Easter Vacation", as they generally take place in the weeks before or after Easter.[ citation needed] However, in the states of Massachusetts and Maine, schools typically schedule spring break for the week of the third Monday in April to coincide with Patriots' Day.

In Guatemala and Honduras, it takes place during Easter; schools give students a whole week to rest while the staff workforce rests approximately three days.[ citation needed]

In Colombia, spring break takes place the first week of April, during the Holy Week until the second week.

In Chile, many schools and universities take vacations in the middle of September coinciding with the celebration of the Fiestas Patrias (Celebration of that country). Being located in the Southern Hemisphere, spring begins approximately at the end of this holiday week so it acts similarly to the United States spring break.

The South Pacific enjoys spring break during November. Some tour companies are now chartering out entire island resorts for the festivities. [3]

European party destinations are increasingly becoming popular for international spring break guests. [6] Tour agencies have cited the lower drinking ages in these places and that even then, they are rarely enforced. Some tour companies put on special chartered flights for spring break at discounted rates.

Starting in the late '90s, Panama City Beach began advertising the destination hoping to attract crowds that had formerly gone to Fort Lauderdale and then Daytona Beach before those communities enacted restrictions. From 2010-2016 an estimated 300,000 students traveled to the destination. The spawn of social media and digital marketing helped boost the beach town into a student mecca during March. Following well publicized shootings and a gang rape in 2015, several new ordinances were put into effect prohibiting drinking on the beach and establishing a bar closing time of 2 a.m. Central Time. Reports show a drop in Panama City Beach's spring break turnout in March 2016 [23] followed by increased family tourism in April 2016. Both are credited/blamed on the new ordinances by the Bay County Community Development Corporation (CDC). [24]

Fort Lauderdale's reputation as a spring break destination for college students started when the Colgate University men's swim team arrived to practice there over Christmas break in 1934. [25] Attracting approximately 20,000 college students in the 1950s, spring break was still known as 'Spring vacation' and was a relatively low key affair. This began to change when Glendon Swarthout’s novel, Where the Boys Are was published in 1960, effectively ushering in modern spring break. [26] Swarthout's 1960 novel was quickly made into a movie of the same title later that year, Where the Boys Are, in which college girls met boys while on spring break there. The number of visiting college students immediately jumped to over 50,000. [27] By the early 1980s, Ft. Lauderdale was attracting between 250,000-350,000 college students per year during spring break. Residents of the Fort Lauderdale area became so upset at the damage done by college students that the local government passed laws restricting parties in 1985. At the same time, the National Minimum Drinking Age Act was enacted in the United States, requiring that Florida raise the minimum drinking age to 21 and inspiring many underage college vacationers to travel to other locations in the United States for spring break. By 1989, the number of college students traveling to Fort Lauderdale fell to 20,000, a far cry from the 350,000 who went four years prior. [27] [28]

It is common for major brands that cater to the youth market (e.g., Coca-Cola, Gillette, MTV, and branches of the United States Armed Forces) to market at spring break destinations.[ clarification needed]