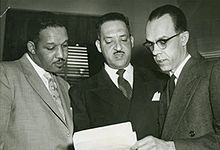 In the early 1950s, Robinson and his law-partner Oliver Hill, working through the NAACP Legal Defense Fund, litigated several civil rights lawsuits in Virginia. In 1951, Robinson and Hill took up the cause of the African-American students at the segregated R.R. Moton High School in Farmville, Virginia who had walked out of their dilapidated school. The subsequent lawsuit, Davis v. County School Board of Prince Edward County, was consolidated with four other cases decided under Brown v. Board of Education by the Supreme Court of the United States in 1954. In his arguments before the Court, Robinson made the first argument on behalf of the plaintiffs. [3] Robinson also participated in Chance v. Lambeth, which invalidated carrier-enforced racial segregation in interstate transportation. [4]

Robinson received a recess appointment from President Lyndon B. Johnson on January 6, 1964, to a seat on the United States District Court for the District of Columbia vacated by Judge James Ward Morris. He was nominated to the same seat by President Johnson on February 3, 1964. He was confirmed by the United States Senate on July 1, 1964, and received his commission on July 2, 1964, becoming the first African-American to serve on this court. [5] His service was terminated on November 8, 1966, due to elevation to the D.C. Circuit. [2]

Robinson was nominated by President Johnson on October 6, 1966, to a seat on the United States Court of Appeals for the District of Columbia Circuit vacated by Judge George Thomas Washington. He was confirmed by the Senate on October 20, 1966, and received his commission on November 3, 1966. [2] He served as Chief Judge from 1981 to 1986, becoming the first African-American to both serve on this court and serve as Chief Judge of the court. He assumed senior status on September 1, 1989. His service was terminated on October 11, 1998, due to his death in Richmond. [6]

Robinson's opinion in Canterbury v. Spence is credited with requiring medical doctors to secure informed consent and as the beginning of a more litigious medical culture. [7]