MetLife Stadium in East Rutherford, Bergen County, home to the NFL's New York Giants and New York Jets and the most expensive stadium ever built. [1]

New Jersey currently has four teams from major professional sports leagues playing in the state, although the Major League Soccer team and two National Football League teams identify themselves as being from New York metropolitan area. 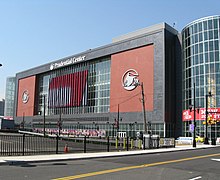 The Prudential Center in Newark, home of the NHL's New Jersey Devils.

The National Hockey League's New Jersey Devils, based in Newark at the Prudential Center, is the only major league franchise to bear the state's name. Founded in 1974 in Kansas City, Missouri as the Kansas City Scouts, the team played in Denver, Colorado as the Colorado Rockies from 1976 until the spring of 1982 when naval architect, businessman, and Jersey City native John J. McMullen purchased and relocated the franchise to Brendan Byrne Arena in East Rutherford's Meadowlands Sports Complex under its current identity. While the organization was largely a failure on the ice in Kansas City, Denver, and its first years in New Jersey, the Devils would ultimately begin their rise to prominence in the late 1980s and early 1990s under the tenure of Hall of Fame president and general manager Lou Lamoriello, winning the Stanley Cup in 1995, 2000, and 2003, and act as an annual fixture in the Stanley Cup playoffs for the majority of two decades. The organization is the youngest out of all nine "Big Four" major league teams within the New York Metropolitan Area and media market dominated in terms of ice hockey by the New York Rangers and Islanders prior to the Devils' arrival, but has ultimately been successful in establishing a visible and dedicated following throughout the northern and central portions of the state. In 2018, one of the Devils' fiercest rivals, the Philadelphia Flyers, renovated and expanded their training facility, The Virtua Center Flyers Skate Zone, in Voorhees Township in the southern portion of the state. [2]

The New York Metropolitan Area's two National Football League teams, the New York Giants and the New York Jets, both play at MetLife Stadium in East Rutherford's Meadowlands Sports Complex. [3] At completion, with a construction cost of approximately $1.6 billion, [4] the venue is the most expensive stadium ever built. [1] On February 2, 2014, MetLife Stadium was the host for Super Bowl XLVIII.

Rutgers and Princeton athletics share an intense rivalry – stemming from the first intercollegiate football game in 1869 – though the two schools have not met on the football field since 1980. They continue to play each other annually in all other sports offered by the two universities.

Rutgers, which fields 24 teams in various sports, is nationally known for its excellent football and women's basketball programs, owning a 6-4 all-time bowl record and appearing in a National Final in 2007, respectively. In 2008 and 2009, Rutgers expanded their football home HighPoint.com Stadium on the Busch Campus, and the basketball teams play at Louis Brown Athletic Center on Livingston Campus. Both venues and campuses are located in Piscataway, immediately across the Raritan River from New Brunswick. The university also fields rising men's basketball and baseball programs. Rutgers' fan base is mostly derived from the western parts of the state and Middlesex County, not to mention its alumni base, which is the largest in the state.

Seton Hall, unlike Rutgers and Princeton, does not field a football team. Its men’s basketball team, however, is one of the Big East's storied programs, New Jersey's most successful representative in the NCAA Division I Men's Basketball Tournament by number of wins, the state's only men's basketball program to reach a modern National Final, and plays its home games at Prudential Center in downtown Newark approximately four miles from the university's South Orange campus. The Pirates, while lacking as large an alumni base as the state university, have a large well of support in the predominantly Roman Catholic areas of the northern part of the state and the Jersey Shore. The annual inter-conference rivalry game between Seton Hall and Rutgers which alternates between Newark and Piscataway, the Garden State Hardwood Classic, has been renewed through 2026. [7]

Among the various Division III schools in the state, the Stevens Institute of Technology Ducks have fielded the longest continuously running collegiate men's lacrosse program in the country. 2009 marked the 125th season.