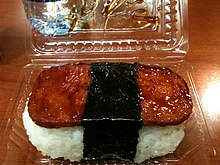 Spam musubi is a popular snack and lunch food composed of a slice of grilled Spam sandwiched either in between or on top of a block of rice, wrapped together with nori in the tradition of Japanese omusubi.

Inexpensive and portable, Spam musubi are commonly found near cash registers in convenience stores or mom-and-pop shops all over Hawaii and Guam. Musubi can be easily made with the right materials, and typically only uses spam, rice, some salt, nori and shoyu (soy sauce). In Hawaii, musubi made from homemade spam is served on catering trays at formal events by celebrity chefs such as Alan Wong at his exclusive restaurants. [1]

Spam became a popular food in Hawaii after World War II. Spam was a main course for the troops during the war, and the large military presence in Hawaii led to Spam's widespread local adoption. Spam musubi was actually created in the Japanese internment camps on the mainland of the United States during the war although it is often credited to Hawaii because of its prevalence. [2]

Typical preparation begins with grilling or frying slices of Spam, sometimes with a light teriyaki flavor. It uses a sauce in which soy sauce and granulated sugar are typically the basic ingredients. Using a mold the same size as a slice of Spam, a layer of cooked rice is pressed down over a strip of nori, with a slice of Spam on top of that, and then, optionally, another layer of rice. The mold is removed and the nori is wrapped over the top and around the musubi. It is served sometimes with soy sauce or Japanese mayonnaise.[ citation needed]

Similar to the Japanese onigiri, variations on the traditional Spam musubi exist.

The following are just a few examples of the limitless variations: