South Tarawa (in Gilbertese Tarawa Teinainano) is the capital and hub of the Republic of Kiribati and home to more than half of Kiribati's population. [2] The South Tarawa population centre consists of all the small islets from Betio in the west to Bonriki and Tanaea in the north-east, connected by the South Tarawa main road, with a population of 56,388 as of 2015 [update]. [1]

South Tarawa is home to most of the government, commercial and education facilities in Kiribati including the Port and the High Court at Betio, the State House, Government Ministries and foreign embassies and High Commissions in Bairiki, a University of the South Pacific campus in Teaoraereke, the House of Assembly in Ambo, the Kiribati Teacher College and King George V and Elaine Bernacchi School, the Government High School, is in Bikenibeu, [3] and the Tungaru central hospital in Nawerewere. The Roman Catholic Diocese is based in Teaoraereke, the Kiribati Uniting Church in Antebuka, the National Spiritual Assembly of the Bahá’ís of Kiribati in Bikenibeu, and The Church of Jesus Christ of Latter-day Saints in Eita. [4]

Buota, which is part of North Tarawa and administered by the Eutan Tarawa Council (or ETC), is linked by road to South Tarawa and is experiencing many similar issues of rapid population growth, urbanisation and environmental degradation.

The process of soil accumulation is driven by the dominant easterly trade winds and can be reversed during extended periods of westerly winds during El Niño–Southern Oscillations. [7]

These islets are now joined by causeways, forming one long islet on the reef along the southern side of the Tarawa Lagoon. Most of South Tarawa is less than 3 metres (9.8 feet) above sea level with an average width of only 450 metres (1,480 feet). [4] 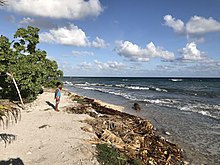 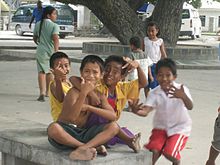 At the time of the 1978 Census, South Tarawa had a population of 17,921 with most residents living in the main population centres of Betio, Bairiki and Bikenibeu. Since Kiribati became independent in 1979, the population of South Tarawa has tripled, and now stands at 56,388 people (2015). [1] All of South Tarawa is now urbanised and is effectively one continuous settlement from the northeastern end of the island, Tanaea, to its southwestern end at Betio.

Buota in North Tarawa is connected to the South Tarawa main road and is also growing rapidly.

Tarawa island is central to Kiribati mythology and culture, but life on South Tarawa was little different to that on other islands before it was selected in 1895 as the seat of colonial government for the Protectorate of the Gilbert and Ellice Islands. From 1906 to 1942, Ocean Island was the headquarter of the colony, then Funafuti because of the Japanese occupation of the Gilbert Islands until 1946, when it returned to Tarawa.

Betio was the location of the Battle of Tarawa.

Impacts of coastal erosion and drought on coconut palms in Eita, South Tarawa

Households on South Tarawa do not have the option to retreat from coastal erosion, as the atoll is narrow and already crowded.

The highest point on South Tarawa is only a few meters above sea level, making the island extremely vulnerable to natural disasters. The effects of floods and associated soil salination are starting to threaten limited freshwater supplies. [10]

The weather in South Tarawa is warm and humid all year round and average rainfalls are relatively high. However, rainfall is very unpredictable, varying with the El Niño–Southern Oscillation, and South Tarawa can go for many months with almost no rain during La Niña cycles.

South Tarawa has very limited water resources for its rapidly growing population. During the frequent droughts, the only source of water is the shallow freshwater lens that permeates the coral rock of the atoll. The water lenses at Bonriki and Buota have been declared as water reserves, and have a combined sustainable yield of 1,300 m3 per day.

Other previously declared water reserves have been relinquished for urbanisation or abandoned due to overpumping and pollution from human settlement. [12]

Water from the Bonriki and Buota reserves is distributed by a reticulated network to South Tarawa households. However, the poor condition of the network and the limited water supply mean that water can only be supplied to each village for around 2 hours every two days. Most schools and community buildings have no water supply at all, and many households rely on polluted groundwater due to the shortage of treated water. [13]

Because of the shortage of fresh water, sanitation systems must use saltwater for flushing. The sanitation network on South Tarawa is performing very poorly, and a major project is underway to rehabilitate the system and improve sanitation and public hygiene. [14]

The Ministry of Environment, Lands and Agricultural Development (MELAD) is involved in the replanting of mangroves in selected sites to help against coastal erosion; however, much more is required to protect many of the sites eroded on South Tarawa including islets that once were protected with mangrove and iron-wood (tengea) trees. It is unclear how much of the erosion being experienced on South Tarawa is due to sea-level rise and how much is due to human activities (such as building inappropriate seawalls and mining sand and gravel from the beaches and foreshores. Coastal erosion will accelerate in future, due to climate change related sea level rise. [4] 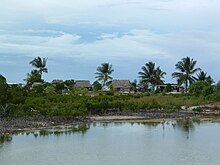 Much of this land is not available for use, including the water reserve and runway, the causeways, and a large area of reclaimed land at Temwaiku, the eastern corner of the atoll, which is too swampy and low-lying. If these areas are excluded, the land area of South Tarawa is only just over 1,000 hectares (10 square km or 2,500 acres) and the population density of 49 people per hectare or 4,905 per square km is almost equal to the density of London (5,100 people per km2) and twice the density of Sydney, Auckland, or New York. [15]

Multi-storey buildings are very uncommon on South Tarawa. The high population is accommodated through large household sizes, with an average of 7.3 people per household, on small land plots. Most land is owned by the original families or kain Tarawa, although in the main centres of Betio, Bairiki and Bikenibeu there are large areas of land on long-term lease to the government. Without access to family lands or government housing, many South Tarawa residents have no choice but to become squatters; disputes over land are common.

South Tarawa and especially Betio have high rates of respiratory infections, diarrhoea, and dysentery, [4] all of which have been linked to overcrowding. [16] Unsustainable development in South Tarawa is a concern to the government and to Kiribati's aid partners. [17] Anote Tong's administration aims to ease the problem in the country's main urban centre by encouraging people to stay and to resettle in outer islands. It has invested in facilities such as the South Kiribati Hospital to spread institutions and services out around the islands and relieve South Tarawa from overcrowding. [18]

Reasons land not available for use: 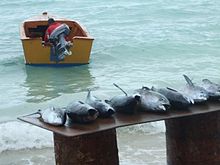 South Tarawa is the economic hub of Kiribati, the location of the main port and airport and of most of the state-owned enterprises and private businesses. 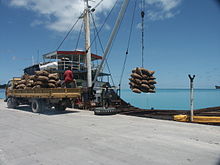 Copra produced on the outer islands is processed on Betio, producing copra oil for the international market and other products which are sold locally. There is a fish processing plant producing tuna for export.

Imports far outweigh exports, and most households on South Tarawa rely on government employment and remittances from relatives working overseas. Unemployment and underemployment are a serious problem; in 2010 only 34% of urban adults (over 15) were engaged in cash work; the remaining two-thirds are either out of the labour force, unemployed or engaged in subsistence activities. Young people are especially likely to be unemployed.

Fiji Airways flies to Bonriki International Airport on South Tarawa from Nadi, on Mondays and Thursdays. Solomon Airlines flies to Honiara and Brisbane at least once a week.

There is a range of accommodation available for visitors and for those working short term in South Tarawa. Details are available from Tourism Kiribati. [20]