From Wikipedia, the free encyclopedia
For other uses, see South Kensington (disambiguation).
Human settlement in England

South Kensington is a district just west of Central London in the Royal Borough of Kensington and Chelsea. Historically it settled on part of the scattered Middlesex village of Brompton. [1] Its name was supplanted with the advent of the railways in the late 19th century and the opening (and shutting) and naming of local tube stations. [2] The area is known as a popular tourist destination owing to the density of museums and cultural landmarks. Adjacent affluent centres such as Knightsbridge, Chelsea and Kensington, have been considered as some of the most exclusive real estate in the world. Since World War I it has become a cosmopolitan area attracting Belgian and French refugees, but also Poles during World War II and after, and latterly Spanish, Italian, American, and Middle-Eastern expatriates. The French presence is emphasised by the Lycée Français Charles de Gaulle, the French Institute, hosting the Ciné Lumière a window on French cinema and the Alliance française and the French consulate, among other diplomatic residences. [3] With a French bookshop and many international cafés in the area, it has been called Paris’s 21st arrondissement. [4]

The Geological Museum (1843) at its new location, Exhibition Road from 1935, now integrated with the Science Museum

As is often the case in other areas of London, the boundaries for South Kensington are arbitrary and have altered with time. This is due in part to usage arising from the tube stops and other landmarks which developed across Brompton. A contemporary definition is the commercial area around the South Kensington tube station and the adjacent garden squares and streets (such as Onslow Square and Thurloe Square, opposite the Victoria and Albert Museum). To the north is the Kensington Gore, to the south the winding Fulham Road and streets leading to Sloane Square and to the west, the residential and hotel area of Gloucester Road. South Kensington station lies on the junction of several thoroughfares: principally the Old Brompton Road, Harrington Road and Pelham Street and a stone's throw from the arterial Cromwell Road. It is furthermore criss-crossed by the Exhibition Road and the stately Queen's Gate and Prince Consort Road. Until road lay-out improvements in 2012, the area was afflicted with traffic congestion and likened to a series of traffic islands. [5]

Modern development of the area is the result of the creation of the temporary Albertopolis reached by Exhibition Road, whose terrain now includes the Natural History Museum, the Geological Museum, the Science Museum, the Victoria and Albert Museum, London Oratory and since 1915, the Lycée Français. Other local institutions include the Polish Institute and Sikorski Museum, Polish Hearth Club, London Goethe-Institut, the Royal Albert Hall, Imperial College London, the Royal Geographical Society, the Royal College of Art, the Royal College of Music and between 1903 and 1991, the Royal College of Organists, West London Air Terminal, the Ismaili Centre, London and the late comer 1960s Baden-Powell House some of which are administratively within the City of Westminster, but considered to be "within range of South Kensington". Although the SW7 postcode mainly covers South Kensington, it goes into Knightsbridge. The only Royal Mail Post Office in South Kensington closed in 2019. 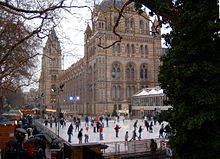 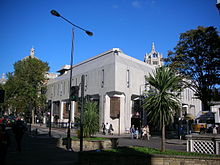 Following the 1851 Great Exhibition in Hyde Park, an 87-acre (352,000 m2) area, west of what is now Exhibition Road, was purchased by the commissioners of the exhibition, in order to create a home for institutions dedicated to the arts and sciences, resulting in the foundation of the museums and of the technological university there. The market gardens of the rural area began to make way for a series of hospitals, such as the Brompton Hospital and the New Cancer Hospital along nearby Fulham Road. [6] Adjacent landowners began to develop the land in the 1860s as a result of the transport hub and the general urbanisation boom west of London, and led to the eventual absorption of Brompton and its station into London. It was sealed by the arrival of the Metropolitan and District Railways at Brompton, but for public relations reasons, it was named "South Kensington" in 1868. To facilitate public access to the museums, the railway company built a pedestrian tunnel directly from the station concourse to an exit halfway up Exhibition Road, next to the now defunct Royal Mail sorting office. to avoid crowds having to cross the Cromwell Road. In 1906 the new Great Northern, Piccadilly and Brompton Railway company opened the Brompton Road tube station in the vicinity, thus adding a link directly to the political, commercial and financial heart of the capital in Westminster, the West End and the City of London, but owing to under use, it was shut in 1934. During World War II it was used by the 26th (London) Anti-Aircraft Brigade. [7]

On 30 April 1980 the peace of South Kensington was shattered when a group of gunmen, representing an Arab dissident faction, entered the Iranian embassy and took the staff, visitors and a diplomatic policeman, hostage. There followed a six-day siege during which a hostage was killed. The British SAS finally stormed the building, covered by live media from the outside, in a 17-minute operation bringing out the hostages and the one surviving gunman who was subsequently sentenced to 27 years in prison for his part in the offences. [8]

The first church to rise among the fields at Brompton was the socially notable, but widely considered architecturally ugly, Holy Trinity Brompton in 1829. It served a wide area from the Kensington Canal in the west to the Kensington Turnpike in the north. The first incumbent, one Percival Frye, just happened to be the nephew of Archdeacon Alfred Pott, vicar of the neighbouring Kensington parish. [1] It was followed by:

The area is the subject of Donovan's song "Sunny South Kensington", about the area's reputation as the hip part of London in the 1960s.

Christie's auction house had a second London salesroom in the Old Brompton Road, South Kensington from 1975, which primarily handled the middle market. Christie's permanently closed the South Kensington salesroom in July 2017 as part of their restructuring plans announced March 2017. The closure was due in part to a considerable decrease in sales between 2015 and 2016 in addition to the company expanding its online presence. [9] [10]

Tim Waterstone opened his first eponymous Waterstones bookshop in 1982 in Old Brompton Road. It has given way to a Little Waitrose. [11]

Caffè Nero also started life as a single coffee shop in Old Brompton Road, opened by Ian Semp in 1990. It was subsequently bought out and became a chain. [12] 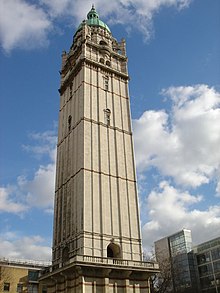