From Wikipedia, the free encyclopedia
cultural region of the United States 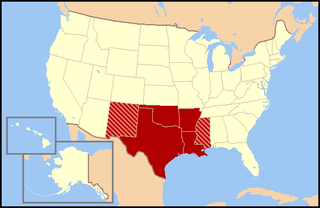 Regional definitions vary from source to source. The states shown in dark red are usually included, while all or portions of the striped states may or may not be considered part of the South Central United States.

The South Central United States or South Central states is a region in the south central portion of the Southern United States. It evolved out of the Old Southwest, which originally was literally the western U.S. South, as can be seen in the now defunct Southwest Conference of the National Collegiate Athletic Association (NCAA). The states of Arkansas, Louisiana, Oklahoma, and Texas (which make up what the Census Bureau Division calls West South Central States) are almost always considered the "core" of the region. As part of the East South Central States sub-group of the Census Bureau classification, Alabama, Mississippi, Tennessee and Kentucky are also frequently listed under the heading. At the highest extent, Kansas, and Missouri, may be included by some sources. All or parts these states are in the Central Time Zone. At different times, all of the above states were/are considered part of the Western United States in American history.

The climate varies from the semi-tropical in the Mississippi Delta, South Louisiana, and Southeast Texas, to the dry Chihuahuan desert in West Texas. The southeastern portions include the Appalachian mountains in Alabama and Tennessee and the Piney Woods of East Texas, Louisiana, and southern Arkansas and the Mississippi Delta. A large portion of the northeastern quarter of the region is mountainous, with the Ozark and Ouachita Mountains of Arkansas and eastern Oklahoma. The northwest quarter of the region is dominated by the Great Plains which become progressively drier west of 100° W, forming the North American Llano Estacado. The southwestern portions border the Rio Grande, and are generally drier than other areas of the South Central United States.

These four states come together in a region known as the Ark-La-Tex region.

Two megaregions exist within this region:

The history of the South Central states is dominated by the conflict and interaction between three cultural-linguistic groups: the Anglosphere (first Great Britain and then the United States), the Hispanidad (first Spain then Mexico), and the Francophonie (always France). In the 17th and 18th centuries Spain and France maneuvered for control of Texas, with the Spanish based in Mexico and New Mexico and the French in Louisiana. During the War of the Quadruple Alliance hostilities spread to the New World and the French troops from Natchitoches briefly captured the capital of Spanish Texas, Los Adaes in what is now western Louisiana. The French were not able to wrest control of Texas from Spain, and by the early 19th century sold their North American holdings to the United States in the Louisiana Purchase, which comprised slightly less than half of what is today the South Central United States.

The official West and East South Central states of Texas, Arkansas, Louisiana, Mississippi, Alabama and Tennessee were members of the Confederacy during the Civil War. Kentucky was often considered a "non-official" Confederate state. Oklahoma, although Indian Territory at the time, was home to 5 Native-American tribes, of which a majority allied themselves with the Confederacy. Thus, all these states are usually considered to make up a large part of the American South both historically and culturally, as well as classified by the U.S. Census Bureau.