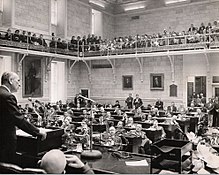 Prior to the 1964 federal Reynolds v. Sims decision by the U.S. Supreme Court, the House of Representatives was apportioned so that each county had a number of representatives based on population, with each county guaranteed at least one representative, while each county had one Senator. Moreover, each county's General Assembly delegation also doubled as its county council, as the state constitution made no provision for local government.

Reynolds v. Sims [2] caused district lines to cross county lines, causing legislators to be on multiple county councils. This led to the passage of the Home Rule Act of 1975, which created county councils that were independent of the General Assembly. However, the General Assembly still retains considerable authority over local government. As a result, the legislature still devotes considerable time to local matters, and county legislative delegations still handle many matters that are handled by county governments in the rest of the country. [3]

There are 124 members of the South Carolina House of Representatives, who are elected every two years, and the South Carolina Senate has 46 members, elected every four years concurrent to the presidential election. For both houses, there are no term limits. The General Assembly meets in joint session to elect judges, with all 170 members having an equal vote in such elections.

Below is a chart of party control in the South Carolina General Assembly since 1868.