From Wikipedia, the free encyclopedia
Not to be confused with South Atlantic. 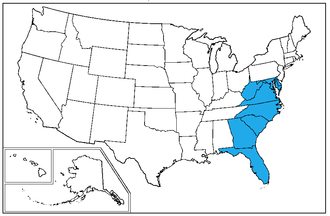 The South Atlantic States, U.S. Census Bureau Region 3, Division 5, corresponds to the Old South with the addition of Florida.

The name of the census division does not refer to the South Atlantic Ocean, but rather to its location along the Atlantic Coast of the United States. Farther north are the Mid-Atlantic states and the North Atlantic states.

All entities within the region apart from the District of Columbia and West Virginia border the North Atlantic Ocean.

Together with the East South Central States ( Alabama, Kentucky, Mississippi and Tennessee) and the West South Central States ( Arkansas, Louisiana, Oklahoma and Texas), the South Atlantic States constitute the United States Census Bureau's broader Census Bureau Region of the South (the other three regions being the Northeast, Midwest and West, all of which have two divisions).