Somerset County is a county located in the central of the U.S. state of New Jersey. As of the 2018 Census estimate, the county's population was 331,164, [4] a 3.7% increase from the 2010 United States Census, making it the 13th most populous of the state's 21 counties. [5] [6] Somerset County is part of the New York Metropolitan Area. Its county seat is Somerville. [3] The most populous place was Franklin Township, with 62,300 residents at the time of the 2010 Census, while Hillsborough Township, covered 55.00 square miles (142.4 km2), the largest total area of any municipality. [7]

Somerset County is one of America's oldest counties, and is named after the English county of Somerset. The area was first settled in 1681, in the vicinity of Bound Brook, and the county was established by charter on May 22, 1688. Most of the early residents were Dutch. General George Washington and his troops marched through the county on several occasions and slept in many of the homes located throughout the area. Somerset County also played an important part during both World War I and World War II with weapons depots and the manufacturing of the army's woolen blankets.

In 1917, Somerset County, in cooperation with Rutgers University, hired its first agricultural agent to connect local farmers with expert advice. The Rutgers Cooperative Extension of Somerset County, located in Bridgewater, serves residents in the areas of agriculture and natural resources, 4-H youth development and family and community health sciences. [15]

In the 1960s, townships that were once exclusively agricultural were quickly transformed into suburban communities. Examples include Bridgewater Township [16] and the Watchung Hills communities of Watchung, Green Brook and Warren Township. [17] [18] [19] This growth was aided by the development of the county's very strong pharmaceutical and technology presence. Warren Township used to be considered "the greenest place in New Jersey." [17] More recently, there has been an influx of New York City commuters who use NJ Transit's Raritan Valley Line and Gladstone Branch or use Interstate 78.

The high point is on Mine Mountain in Bernardsville, at approximately 860 feet (260 m) above sea level. [21] The lowest point is just above sea level on the Raritan River at the Middlesex County line.

Somerset County parks include Lord Stirling Park (part of the Great Swamp National Wildlife Refuge), Colonial Park (with a lovely rose garden), Washington Valley Park (with biking and hiking trails), the Sourland Mountain Preserve (hiking and mountain biking trails), and the newest park in development called Raritan River Greenway (which is being developed along the Raritan River in Bridgewater Township). [33]

The Somerset Patriots are a professional baseball team who plays at the 6,100-seat TD Bank Ballpark, located on the border of Bridgewater and Bound Brook. They play in the independent Atlantic League of Professional Baseball. [36]

Somerset County is governed by a five-member Board of Chosen Freeholders, whose members are elected at-large to three-year terms of office on a staggered basis, with one or two seats coming up for election each year. At an annual reorganization meeting held on the first Friday of January, the board selects a Director and Deputy Director from among its members. [37] In 2016, freeholders were paid $21,902 and the freeholder director was paid an annual salary of $22,902. [38]

The Freeholders employ a full-time County Administrator who manages the day-to-day operations of County government. The County Administrator is Michael J. Amorosa. [39] The Clerk of the Board of Freeholders oversees the work of their offices. Department heads are appointed in accordance with statute and by resolution of the board. Somerset County currently has approximately 1,100 full-time and 130 part-time employees in 52 divisions (including the Library System). [40]

Pursuant to Article VII Section II of the New Jersey State Constitution, each county in New Jersey is required to have three elected administrative officials known as "constitutional officers." These officers are the County Clerk and County Surrogate (both elected for five-year terms of office) and the County Sheriff (elected for a three-year term). [52] Constitutional officers, elected on a countywide basis are: [43]

The Somerset County Prosecutor is Michael H. Robertson of the Basking Ridge section of Bernards Township, who was nominated by Governor of New Jersey Chris Christie in September 2016. [57] [58]

Somerset County is a part of Vicinage 13 of the New Jersey Superior Court (along with Hunterdon County and Warren County), which is seated at the Somerset County Courthouse in Somerville; the Assignment Judge for Vicinage 15 is Yolanda Ciccone. [59]

Senator Anthony R. Bucco died in September 2019. A special convention of the Republican County Committee members from the district met on October 15, 2019, and unanimously selected his son, Assemblyman Anthony M. Bucco to fill his father's seat until a 2020 special election. Assemblyman Bucco then resigned from the Assembly and on October 24, 2019, was sworn into the Senate. In a special convention following the 2019 General Election, Dunn was slected and will serve until the end of the current Legislative Session, January 14, 2020. [79]

In the 2004 presidential election, George W. Bush carried Somerset County by a 4.3% margin over John Kerry, with Kerry carrying the state by 6.7% over Bush. [82] However, in 2008, Barack Obama became the first Democratic Presidential nominee to carry the county since Lyndon Johnson in 1964, and only the second since 1936. Obama won Somerset by a 6.1% margin over John McCain, with Obama carrying the state by 15.5% over McCain. [83] Somerset's growing Democratic trend at the presidential level has largely been spurred by the rapid growth of the overwhelmingly Democratic Franklin Township in the county's southwest corner.

In 1996, Nicholas L. Bissell Jr., then county prosecutor, was charged with embezzlement, tax fraud and abuse of power. He fled to Laughlin, Nevada, near Las Vegas and took his own life when the federal authorities attempted to arrest him. [87]

Based on IRS data for the 2004 tax year, Somerset County taxpayers had the ninth-highest average federal income tax liability per return in the country. Average tax liability was $16,502, representing 16.8% of Adjusted Gross Income. [88]

Alma White College (which operated from 1921 to 1978) was a private college located in Zarephath. [92] Beginning in 1931 the college operated WAWZ 1380 on the AM radio dial. The station continued to 1984 after the school closed. The building is now occupied by Somerset Christian College.

Somerset Hills Learning Institute, founded in 1998 and now located in Bedminster Township, is a state-of-the-art program dedicated to educating children on the autism spectrum by utilizing the principles of applied behavior analysis. [93] 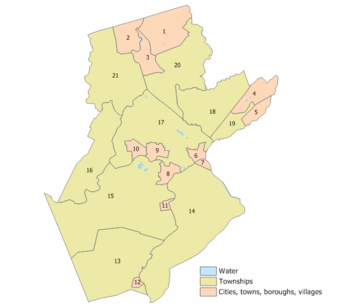 Municipalities in Somerset County (with 2010 Census data for population, housing units and area) are listed below. [94] Other, unincorporated communities in the county are listed alongside their parent municipality (or municipalities, as the case may be). These areas include census-designated places (CDPs), which have been created by the United States Census Bureau for enumeration purposes within a Township. [7] Other communities, historical areas, unincorporated areas, and enclaves that exist within a municipality are also listed.

The only two state routes that traverse through are Route 27 (only in Franklin) and Route 28.

Interstate 95 was planned to run along the Somerset Freeway from its proposed southern end in Hopewell Township, Mercer County to Franklin Township at I-287 in the 1960s. However, this plan was cancelled in 1983.

Route 18 runs at the New Brunswick border of Somerset.