From Wikipedia, the free encyclopedia
For the theme park, see Six Flags Over Texas. 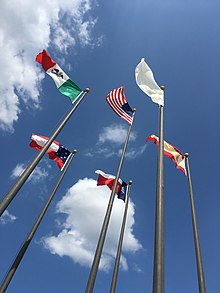 Six different flags that have flown over Texas

This slogan has been incorporated into shopping malls, theme parks ( Six Flags), and other enterprises. The six flags fly in front of the state welcome centers on the state's borders with Arkansas, Louisiana, New Mexico, Mexico, and Oklahoma. In Austin, the six flags fly in front of the Bullock Texas State History Museum; the Texas State Capitol has the six coats of arms on its northern facade, and the University of Texas at Austin Life Sciences Library, previously the location of the central library in the Main Building, has each coat of arms displayed in plaster emblems with short excerpts representative of the constitutions of each country. The six flags are also shown on the reverse of the Seal of Texas.

In 1997 the Texas Historical Commission adopted standard designs for representing the six flags. [2]

Main articles: Flag of Spain and Flag of Castile and León

The first flag belonged to Spain, which ruled most of Texas from 1519 to 1685 and 1690 to 1821. There were three Spanish flags used during this period: the "castle and lion" arms of the Crown of Castile (see Flag of Castile and León); the Cross of Burgundy, a military and maritime flag also used by the viceroys of New Spain; and the Rojigualda introduced by King Charles III in 1785, containing horizontal stripes of red-gold-red and the simple arms of Castile and León. This third flag has been used by Spain in various forms to the present day, and is the flag used in the reverse of the Seal of Texas and adopted by the Texas Historical Commission. [3] [4]

The second flag was the royal banner of the Kingdom of France from 1684 to 1690. In 1684, French nobleman René-Robert Cavelier, Sieur de La Salle, founded a colony on the Texas Gulf Coast called Fort Saint Louis. The colony was unsuccessful, and after La Salle's murder, was soon abandoned. During this time, there was no official French flag, so a number of designs are used in displays of the "six flags". [3] [4]

Later on in 1800, Spain ceded Louisiana to France under the Third Treaty of San Ildefonso. French Louisiana included northern sections of Texas. It remained in the hands of France until 1803, when France sold the Louisiana Territory to the United States. However, what would later be northern Texas was sold back to Spain years later.

The third flag flown (1821 through 1836) was the flag of Mexico. Mexico's independence was recognized by Spain in 1821. The Mexican flag displayed in the Austin Capitol is the one of the Mexican Republic of 1823 through 1864.

This flag was in use in Texas until its independence from Mexico in 1836 (Texas' declaration of independence). [3]

The fourth flag belonged to the Republic of Texas from 1836 to 1845. The Republic had two national flags during its history, the first being the so-called " Burnet Flag". The " Lone Star Flag", the final national flag, became the state flag when Texas joined the United States as a U.S. state in 1845. [4]

The fifth and current flag is that of the United States of America, which Texas joined in 1845. Upon secession Texas abandoned this flag for its sixth, until readmission to the Union in 1865. [4]

Main article: Flags of the Confederate States of America

The sixth flag belonged to the Confederate States of America from 1861 to 1865. During this time, the Confederacy had three national flags. [3] [4]