From Wikipedia, the free encyclopedia
(Redirected from Serbian American)

Serbian Americans [a] ( Serbian: Српски Американци / Srpski Amerikanci), in Serbian, the community is also known as American Serbs ( Serbian: Амерички Срби / Američki Srbi), are United States citizens of Serb ethnic ancestry. As of 2013, there were about 190,000 American citizens who identified as having Serb ancestry. However, the number may be significantly higher, as there were some 290,000 additional people who identified as Yugoslavs [a] living in the United States. [2]

The group includes Serbian Americans living in the United States for one or several generations, dual Serbian–American citizens, or any other Serbian Americans who consider themselves to be affiliated with both cultures or countries.

One of the first Serb immigrants to the United States was the settler George Fisher, who arrived in Philadelphia in 1815, moved to Mexico, fought in the Texan Revolution, and became a judge in California. Another notable early Serb in America was Basil Rosevic, who founded a shipping company, the Trans-Oceanic Ship Lines, around the year 1800. [3] In the early 1800s, many Serb sailors and fishermen from Montenegro and Herzegovina immigrated to New Orleans seeking employment. In 1841, Serbs founded the Greek Orthodox parish with Greek immigrants in New Orleans, further solidifying their presence in the region. [4]

Serbian Americans fought in the American Civil War, primarily on the side of the Confederacy, as most Serbs living in America were in Louisiana and Mississippi. Several Confederate military units were formed by Serbs in Louisiana, such as the Cognevich Company (named for Stjepan Konjevic, who immigrated to Louisiana in the 1830s), and the First and Second Slavonian Rifles. At least 400 Serbs fought in these three units during the Civil War. [5] Several other known Serbian soldiers in the Civil War came from Alabama and Florida, specifically from Pensacola.

Other Serbs settled in Alabama, Illinois, [6] Mississippi and California, where they joined the Gold Rush. [7] Serb immigrants first came in significant numbers to the United States in the late 1800s from the Adriatic regions of Austria-Hungary and areas of the Balkans. [8] During this time, most Serb immigrants to the United States settled in mid-western industrial cities or in California, which had a climate similar to that of the Dalmatian coast. [2] Serb men often found employment in mines, and numerous Serb families moved to mining towns throughout the country. [8] Serbian miners and their families also settled in great numbers in Alaska, and the primary hub of Alaskan Serbs was in Juneau. In 1893, Alaskan Serbs helped build the Orthodox Church in Juneau alongside the native Orthodox Tlingit people. [9] [10] By World War I there were two Serbian societies established in Juneau for the preservation of Serbian customs and heritage in Alaska. [11] In 1943, many Serbian-American miners were killed in the Smith Mine disaster in Montana. [8] 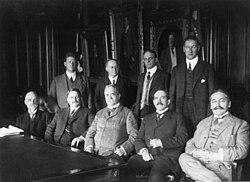 The number of Serbs who immigrated to the United States is difficult to determine as Serb immigrants were often variously classified by their country of origin, thus as Turks, Croats, Slovenes, Montenegrins, Dalmatians, Bosnians, Herzegovinians and Austro-Hungarians. [2] In the 1910 census, there were 16,676 Serbs from Austria-Hungary, 4,321 from Serbia, and 3,724 from Montenegro. [12]

Serbian-Americans volunteered in the First Balkan War. [13] During World War I, as many as 15,000 Serbian-American volunteers returned to the Balkans to fight for the Allied cause in their homeland. Serbs in the United States who did not volunteer to fight marched for the creation of Yugoslavia, sent aid to the Balkans through the Red Cross, formed a Serbian Relief Committee, and urged notable Americans to support the Serbian cause.

With the fall of Communism and the disintegration of Yugoslavia, Serbs in the United States have established several interest groups, the most organized of which is the Serbian Unity Congress (SUC). [21]

Serbs (and Montenegrins) have lived in Alaska since the earliest days of American settlement in the 19th century. Many Serbs came in the Klondike Gold Rush in the late 1890s to seek fortune, just like they had done in the earlier California Gold Rush.

The primary areas of Serbian and Montenegrin settlement were Juneau, Douglas, Fairbanks, and Sitka. Many Serbs settled in the Canadian Yukon during the gold rush as well, such as legendary prospector Black Mike Vojnić. 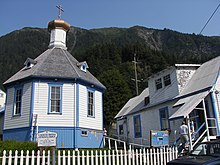 The St. Nicholas Orthodox Church in Juneau, which was built by Serbs and Tlingit natives.

In 1893, Serbian miners in Alaska built the Orthodox Church in Juneau alongside the native Orthodox Tlingit people, who had been converted to Orthodoxy by the Russians decades before. [22] [23] By World War I there were two Serbian societies established in Juneau and in Douglas (Saint Sava Church) for the preservation of Serbian and Russian customs and heritage in Alaska. [24] In 1905 a newspaper called "The Serbian Montenegrin" was founded in Douglas. [25]

St. Sava Church (also spelled "Savva") was a church of the Russian Mission that was located in Douglas, Alaska. Its construction was due, in no small part, to Fr. Sebastian Dabovich (now St. Sebastian of Jackson and San Francisco), who, in 1902, had been appointed Dean of the Sitka Deanery and the superintendent of Alaskan missions. Although under the Russian Orthodox Church, and a "daughter" parish of St. Nicholas Church in Juneau, St. Sebastian found it important that the Serbians that had come to the area— mostly to work in mining— had a church that was "home" to them. On July 23, 1903, Fr. Sebastian, along with Hieromonk Anthony (Deshkevich-Koribut) and the priest Aleksandar Yaroshevich, consecrated the Church of St. Sava in Douglas. However, the sparse records that remain of this church indicate that by the 1920s it may have been sitting empty, and in 1937 a fire swept through Douglas, destroying most of the town, including St. Sava Church. It was not rebuilt.

Serbs also made up a large number of the miners at the Treadwell gold mine until its collapse in 1917 and subsequent closure in 1922. In 1907, during the union conflicts involving the Western Federation of Miners, two Serb miners were killed in an underground shaft; one was a union member, one was not. The funeral procession for the nonunion man was accompanied by a march from the Serbian Slavonic Hall and they ran into the union group of Serbs. The union Serbs demanded the nonunion deceased not be buried in the same cemetery, and some two hundred Serbs of both sides filled the streets. The U.S. Marshal and neutral townsmen had to calm the group in order for the funeral procession to continue. [26] In 1910, there was a massive explosion on the 1,100 foot level of the Mexican mine at Treadwell. 39 men were killed, 17 of whom were Serbian. [27]

During the First World War, many Serbian Americans volunteered to fight overseas, with thousands coming from Alaska. [28]

In 1930s and 40s Fairbanks, Yugoslav immigrants, mainly Serbs and Montenegrins, owned a great number of businesses and bars in the city. In between the world wars, many Serbian Alaskan men returned to Yugoslavia to find brides and bring them back to Alaska to start families. [29]

Today there is a vibrant Serbian community, particularly in Juneau, but Serbs can be found across the state. There is even a Serbian restaurant in remote Healy. [30]

Recently, it has become commonplace for Serbian workers to come to Alaska annually to work for a few months in canneries, where food and accommodation is provided. These workers stay on temporary work visas, and speak English. [31]

Various ethnic organizations put the number of Serbian Americans at more than 350,000. [2]

Notable Serbian Americans among others include recipients of the Medal of Honor such as World War I veterans Jake Allex and James I. Mestrovitch. [38] In 1905, Rade Grbitch, a Serb from South Chicago, was awarded the Medal of Honor by the United States Navy for heroic action on the Pacific Coast (Interim Awards, 1901-1911). The most decorated Serbian veterans of World War II were Mitchell Paige and John W. Minick, both recipients of the Medal of Honor, and George Musulin, an officer of the Office of Strategic Services and naval intelligence, better known for Operation Halyard. In Vietnam, Lance Sijan, received the Medal of Honor posthumously. Butch Verich, Mele "Mel" Vojvodich, and Milo Radulovich are other notable veterans. George Fisher was a 19th-century Serb settler who played an important role in the Texan Revolution. [7] 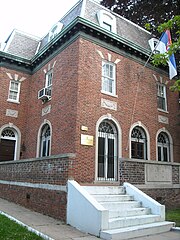 Rose Ann Vuich was the first female member of the California State Senate. Helen Delich Bentley is a former Republican member of the U.S. House of Representatives from the State of Maryland (1985–95). The port of Baltimore was named Helen Delich Bentley Port of Baltimore after her in 2006. Mike Stepovich was the last appointed governor of the Territory of Alaska in the 1950s. Many notable Serbian Americans have been active in the fields of film and art, such as Slavko Vorkapić, Brad Dexter and Peter Bogdanovich. Karl Malden won an Oscar as Best Supporting Actor while Steve Tesich was Oscar-winning screenwriter, playwright and novelist. He won the Academy Award for Best Original Screenplay in 1979 for the movie Breaking Away. Predrag Bjelac is mostly known for his roles in Harry Potter and the Goblet of Fire and The Chronicles of Narnia: Prince Caspian. Catherine Oxenberg is an actress who is a daughter of Princess Jelisaveta Karađorđević, from Karađorđević Dynasty. Darko Tresnjak is a theatre and opera director born in Zemun, who won four Tony Awards in 2014. [39]

Charles Simic and Dejan Stojanovic are notable poets. Walt Bogdanich (1950) is an investigative journalist. He won the Pulitzer Prize for Specialized Reporting in 1985, the Pulitzer Prize for National Reporting in 2005 and the Pulitzer Prize for Investigative Reporting in 2008. Bogdanich led the team that won the 2008 Gerald Loeb Award for their story "Toxic pipeline". Branko Mikasinovich is a scholar of literature as well as a noted Slavist and journalist. He has appeared as a panelist on Yugoslav press on ABC's "Press International" in Chicago and PBS's "International Dateline" in New Orleans. Alex N. Dragnich is the recipient of the Thomas Jefferson Award for distinguished service to Vanderbilt University, and he is author of numerous books on Serbian/Yugoslav history.

Nikola Tesla and Mihajlo Idvorski Pupin are world-known scientists. Another accomplished Serbian-American scientist, Miodrag Radulovački, was named the 2010 Inventor of the Year at the University of Illinois [40] for producing a dozen potential therapies for sleep apnea. Hall of fame basketball player, Pete Maravich (1947–1988) is listed among the 50 Greatest Players in NBA History. Sasha Knezev: is a Serbian American filmmaker known for American Addict, American Addict 2, Fragments of Daniela and Welcome to San Pedro. [41]

Predrag Radosavljević is a renowned former Serbian-American soccer player and famous for scoring a goal against then-ranking no.1 team Brazil to help the United States defeated Brazil for the first time with a 1–0 win in 1998 CONCACAF Gold Cup. [42]