The Seattle metropolitan area is an urban conglomeration in the U.S. state of Washington that comprises Seattle, its surrounding satellites and suburbs. It contains the three most populous counties in the state— King, Snohomish, and Pierce—and is considered part of the greater Puget Sound region. The United States Census Bureau defines the metropolitan area as the Seattle–Tacoma–Bellevue, WA Metropolitan Statistical Area. With an estimated population of 3,979,845 as of 2019 [update], [1] it is the 15th largest Metropolitan Statistical Area (MSA) in the United States and home to over half of Washington's population.

As defined by the United States Census Bureau, the Seattle metropolitan area is made up of the following (see Fig. STB):

Based on commuting patterns, the adjacent metropolitan areas of Olympia, Bremerton, and Mount Vernon, along with a few smaller satellite urban areas, are grouped together in a wider labor market region known as the Seattle–Tacoma–Olympia Combined Statistical Area (CSA) (See Figure STO), commonly known as the Puget Sound region. The population of this wider region is 4,686,536—roughly two-thirds of Washington's population—as of 2017 [update]. [1] The Seattle CSA is the 14th largest CSA, and the 13th largest primary census statistical area in the country. The additional metropolitan and micropolitan areas included are: 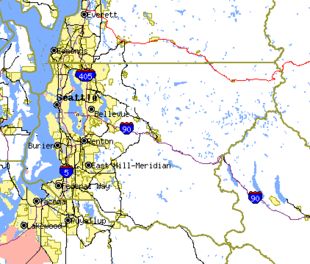 According to the Pew Research Center's 2014 U.S. Religious Landscape Study, the Seattle metropolitan area's religious affiliation is as follows: [5]