San Jacinto is a ghost town in along Salmon Falls Creek in northern Elko County, Nevada, United States. [1] It is part of the Elko Micropolitan Statistical Area.

San Jacinto was the site of a railroad station located eight miles northeast of Contact, Nevada on the Union Pacific railroad. [2]

San Jacinto is named after the San Jacinto Ranch [3], which in turn is named for the Battle of San Jacinto, fought in present day at present-day Houston, Texas in 1836. [2]

The San Jacinto post office was in operation from November 1898 through April 1938. [4]

The site of the former community is just east of U.S. Route 93. (Great Basin Highway) [6] Most of what remains of the ghost town is what is now the San Jacinto Ranch. 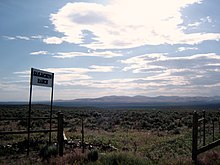