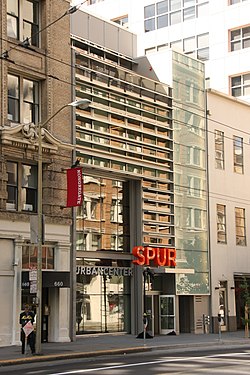 SPUR, formally known as the San Francisco Bay Area Planning and Urban Research Association, is a non-profit research, education, and advocacy organization focused on issues of planning and governance in San Francisco, San Jose and Oakland.

SPUR's history dates back to 1910, when a group of young city leaders came together to improve the quality of housing after the 1906 San Francisco earthquake and fire. That group, the San Francisco Housing Association, authored a hard-hitting report which led to the State Tenement House Act of 1911.

In the 1930s, SFHA continued to advocate for housing concerns. In the 1940s, SFHA merged with Telesis, a group of graduates from UC Berkeley's city planning program, to become the San Francisco Planning and Housing Association. In 1942, the association landed a major success with the creation of San Francisco's Department of City Planning.

Retaining growth in the urban core was evaluated in cultural and racial terms. As late as 1966, SPUR's rationale for revitalization was the aspiration San Francisco's "population will move closer to 'standard White Anglo-Saxon Protestant’ characteristics." [2]

Over the years, the organization has grown to more than 6,000 members and has diversified its focus, analyzing subjects from sea-level rise and renewable energy to bicycle lanes and the ties between the Beat movement and the cultural understanding of urbanism. SPUR also provides annual analysis and selective endorsement of San Francisco ballot measures.

In June 2009, SPUR moved into new headquarters at 654 Mission Street. This location houses the majority of SPUR's staff, as well as a gallery, a research library, and meeting space for SPUR's regular hosted talks. [3]

In 2012, SPUR initiated a long-range plan to work in all three of the Bay Area's central cities. [4] The organization opened offices in San Jose in 2012 [5] and Oakland in 2015, [6] adding "Bay Area" to its name to reflect its broader scope. SPUR's board and staff have developed this strategic plan based on the following assumptions: