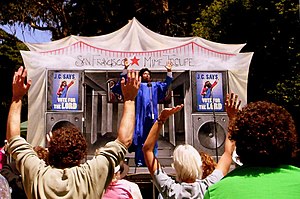 The group was founded in 1959 by R. G. Davis as a medium of expression of his divergent[ citation needed] theatrical concepts. The group debuted with Mime and Word (1959) and The 11th Hour Mime Show (1960). [1] However, by 1961, the group transitioned to the Commedia dell'Arte format to more thoroughly comment on perceived political repression in the United States of America, the growing American Civil Rights Movement and military and covert intervention abroad. In the mid-1960s the group started to rely less on the direct Commedia dell'Arte format and transitioned into a more rambunctious, satirical style.[ citation needed] It also began integrating elements of Jazz into its musical composition, eventually leading to the inclusion of a jazz band within the troupe. The group gained significant notoriety for its free performances in Golden Gate Park and numerous altercations with law enforcement.

By the early 1970s, the Troupe had earned a reputation for opposing capitalism, sexism, and war. [2]

In the early '70s Davis left the Troupe when it re-formed as a collective, the members of which operate as the Artistic Director, at which time the Troupe produced one of its most successful shows, The Independent Female (1970). In the 1980s, the group's productions retaliated against the Reagan administration.

Some of the Troupe's popular shows include:

As well as the park-based shows, the Mime Troupe also tours nationally and internationally, having performed throughout Europe, Asia, South and Central America, and has won several awards. The group also facilitates community workshops. They are a nonprofit organization. The season traditionally starts on Fourth of July weekend and ends on Labor Day weekend.

In 1987, the troupe's Brechtian style of guerrilla theatre earned them a special Tony Award for Excellence in Regional Theater. Red State, the Troupe's 2008 fable about a small Midwest town that, after years of being ignored, demands accountability for their tax dollars, was nominated for a San Francisco Bay Area Theater Critic's Award for Best New Script, as was their 2009 production, Too Big to Fail, which detailed how credit and the philosophy of profit at all costs trap mesmerized citizens in a cycle of debt, while endlessly enriching the capitalists who cast the spell.