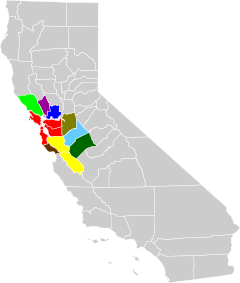 The U.S. Census Bureau estimates the population of this five-county region as of July 1, 2018 as follows: [5]

See also: List of companies based in the San Francisco Bay Area

The real GDP per capita in the adjacent San Jose–Sunnyvale–Santa Clara, CA MSA was $128,276 in 2015 adjusted for inflation, the second highest MSA nationally. [7] [8]

There is a vast geographic diversity within this MSA. The region is composed of at least six terrains (continental, seabed, or island arc fragments with distinct characteristics) pushed together over millions of years by the forces of plate tectonics. There are several fault lines running under the Bay Area, such as the San Andreas, Calaveras, and Hayward Faults. There are two distinct regions of the San Francisco–Oakland–Berkeley, CA MSA which are separated by the San Francisco Bay. These landscapes range from cool foggy mountains and temperate rainforest on the Peninsula and Marin, to semi-arid, near desert terrain in the easternmost portions of the East Bay.

See also: List of cities and towns in the San Francisco Bay Area

In addition to the city and county governments, there are a number of area-wide governmental bodies. Park organizations in the area include the East Bay Regional Parks District and the Golden Gate National Recreation Area. East Bay Municipal Utility District provides water and sewer services to much of the East Bay, with the Marin Municipal Water District providing for parts of Marin County. The Association of Bay Area Governments provides for regional planning. The Bay Area Metropolitan Transportation Commission coordinates transportation projects. The Bay Area Air Quality Management District monitors air quality.