From Wikipedia, the free encyclopedia
For other uses, see Samoa (disambiguation).

The Samoan Islands are an archipelago covering 3,030 km2 (1,170 sq mi) in the central South Pacific, forming part of Polynesia and the wider region of Oceania. Administratively, the archipelago comprises all of the Independent State of Samoa and most of American Samoa (apart from Swains Island, which is geographically part of the Tokelau Islands). The nearest land masses of the two Samoan jurisdictions are separated by 64 km (40 mi) of ocean.

The population of the Samoan Islands is approximately 250,000, [1] sharing the common Samoan language, a culture known as fa'a Samoa, and an indigenous form of governance called fa'amatai. [2] Most Samoans have solely Samoan ancestry, and are one of the largest Polynesian populations in the world. [3]

The oldest evidence of human activity in the Samoan Islands dates to around 1050 BCE. This comes from a Lapita site at Mulifanua wharf on Upolu island. [4] In 1768, the eastern islands were visited by French explorer Bougainville, who named them the Navigator Islands, a name used by missionaries until about 1845 and in official European dispatches until about 1870. [5] 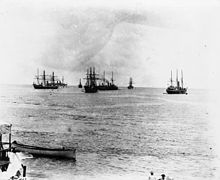 Politically the two jurisdictions of the Samoa Islands are;

In the late 1800s, rivalry between the United States, Germany, and the United Kingdom resulted in the Tripartite Convention (1899) that formally partitioned the Samoan archipelago into a German colony ( German Samoa) and a United States territory (American Samoa). Forerunners to that convention were the Washington Conference of 1887, the Treaty of Berlin of 1889, and the Anglo-German Agreement on Samoa of 1899. New Zealand occupied the German colony through 1920, then governed the western islands until independence in 1962, first as League of Nations Class C Mandate [6] and after 1946 as a United Nations Trust Territory. The pro-independence Mau movement across the islands eventually led to the political independence of the western islands from New Zealand in 1962, while the eastern islands remain a political territory of the United States. [7] 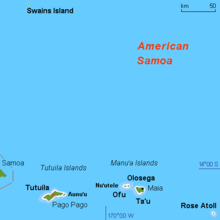 The larger islands are volcanic in origin, mountainous, and covered in tropical moist forest. Some of the smaller islands are coral atolls with black sand beaches.

The two large islands of Upolu and Savai'i in Samoa, are among the largest of Polynesian islands, at 1,718 km2 (663 sq mi) and 1,125 km2 (434 sq mi), respectively, [11] exceeded in size only by the two main islands of Fiji and the Hawaiian islands of Hawaiʻi and Maui. The island of Upolu is more populated than Savai'i.

The next largest island is Tutuila, where the city and harbor Pago Pago (population 3,519 in 1990) is located. Tutuila is much smaller than Upolu and Savai‘i at 136.2 km2 (52.6 sq mi) in area, but it is the largest island in American Samoa. The highest peak on Tutuila is Matafao Peak.

Smaller islands in the archipelago include the three islets ( Manono Island, Apolima and Nu'ulopa) in the Apolima Strait between Savai'i and Upolu; the four Aleipata Islands off the eastern end of Upolu ( Nu'utele, Nu'ulua, Namua, and Fanuatapu); and Nu‘usafe‘e. [12] Aunu'u is a small island off the eastern end of Tutuila. To the east of Tutuila, the Manu'a group comprises Ofu, Olosega, and Ta’u. An uninhabited coral atoll, Rose Atoll, is the southernmost point in the territory of the United States. Another coral atoll, Swains Island, is within the territory of American Samoa but is geographically distant from the Samoan archipelago. [13]

Diagram showing how islands are formed by hotspots

A possible model for the formation of the volcanic Samoa island chain is explained by the Samoa hotspot situated at the east end of the Samoa Islands. In theory, the Samoa hotspot is a result of the Pacific Tectonic Plate moving over a 'fixed' deep and narrow mantle plume spewing up through the Earth's crust. The Samoa islands generally lie in a straight line, east to west, in the same direction the Plate is moving. In the classic hotspot model, primarily based on studies of the Hawaii hotspot, the volcanic islands and seamounts further away from the Samoa hotspot should be progressively older. However, Savai'i, the most western of the Samoa island chain, and Ta'u Island, the most eastern of the Samoa islands, both erupted in the last century, data which is an enigma for scientists. [14] Another discrepancy in the data from the Samoa islands is that subaerial rock samples from Savai'i, the most western of the islands, were too young by several million years to fit the classic hotspot model of age progression in an island chain, raising arguments among scientists that the Samoa islands does not have a plume origin. The nearness of the island chain to the Tonga Trench at the south became a possible explanation for these discrepancies as well as the possibility that the islands were formed by magma seeping through cracks in stressed fracture zones. However, in 2005, an international team gathered further submarine samples from the deep flanks and rifts of Savai'i. Tests on these later samples showed much older ages, about five million years old, that fit the hotspot model. [15] 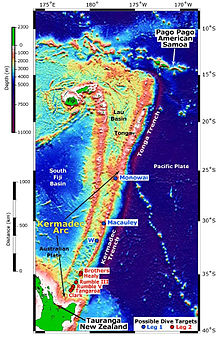 Tonga Trench south of the Samoa Islands and north of New Zealand.

The 2009 Samoa earthquake and tsunami killed more than 170 people in the Samoa Islands and Tonga. The M8.1 submarine earthquake took place in the region at 06:48:11 local time on September 29, 2009 (17:48:11 UTC, September 29), followed by smaller aftershocks. [16] It was the largest earthquake of 2009. The quake occurred on the outer rise of the Kermadec-Tonga Subduction Zone. This is part of the Pacific Ring of Fire, where tectonic plates in the Earth's lithosphere meet and earthquakes and volcanic activity are common.

The Vailulu'u Seamount, an active submerged volcano, lies 45 km (28 mi) east of Ta'u in American Samoa. It was discovered in 1975 and has since been studied by an international team of scientists, contributing towards understanding of the Earth's fundamental processes. [17] Growing inside the summit crater of Va'ilulu'u is an active underwater volcanic cone, named after Samoa's goddess of war, Nafanua.

The climate is tropical, with a rainy season from November to April. The island group is frequently hit by tropical cyclones between December and March, due to its positioning in the South Pacific Ocean. [18]