From Wikipedia, the free encyclopedia
(Redirected from Samoan American)
This article is about Samoans in the United States. For American Samoans, see Demographics of American Samoa.

American Samoa has been an unincorporated territory of the United States since 1900, and Samoa, formally known as the Independent State of Samoa and known as Western Samoa until 1997, is an independent nation that gained its independence from New Zealand in 1962. American Samoa (which is under the jurisdiction of the United States of America) and Samoa together make up the Samoan Islands, an archipelago that covers 1,170 sq mi (3,030 km2). Like Hawaiian Americans, the Samoans arrived in the mainland in the 19th century as fishermen and later worked as agricultural laborers and factory workers.

As per 2019 U.S. Census estimates, there are over 200,000 people of Samoan descent living in the United States, including those of partial ancestry, [1] [2] which is roughly the population of the Independent State of Samoa, as of 2019. Honolulu, Hawaii, has the largest Samoan population of 8,500 making up over 2% of the city's population, while Long Beach, California, has the largest population in the mainland United States: one percent of the city's population, or 4,513 people, as of 2010. There are also Samoan communities throughout the state of California. Other states with cities and towns with significant communities are Alaska, Nevada, Texas, Utah, and Washington.

Entrance to the Polynesian Cultural Center, in Laie, Hawaii, home to one of the highest proportions of Samoan American residents.

Migration from Samoan Islands to the USA began in the 19th century. The Samoans were part of the first Mormon Polynesian colony in the USA, which was founded in Utah in 1889 and consisted of Samoans, Hawaiian natives, Tahitians, and Maori people. [3]

In the 1920s a small group of Mormons from American Samoa emigrated to the modern United States. They were brought by American Mormons to Laie, Hawaii to assist in building the Mormon Temple of this place. [5] [6] The community grew over the decade and in 1929 there were already 125 American Samoans living in Laie, but the Samoan migration to Hawaii fell in the following years. It was probably due to the crash of 29, the loss of an important rice field for the community, and the Second World War. In the second half of the 1940s another many American Samoans emigrated in the USA. Over 330 of them, mostly ormons, moved to Hawaii. [7] In 1951, nearly 1,000 American Samoans linked with the army (i.e. military personnel and their relatives [8]) migrated to the Honolulu's American bases by accepting an invitation from the US Navy (which had left its bases in the Pago Pago city, as American Samoa began to be administered by the U.S. Department of the Interior [5]) so that the Marines could continue working for the Navy. However, many of them later migrated to California (in 1952). [9] [8]

In 1952 the natives of American Samoa become U.S. nationals, although not American citizens, through the Immigration and Nationality Act of 1952. [10] This encouraged Samoan emigration to the United States and during the rest of the decade nearly four thousand Samoan mormons migrated to the USA, mostly to California [11] and Hawaii. Many more Samoans migrated to the USA in the 1960s, surpassing those who emigrated in the previous decade. In fact, the largest Samoan migration to the US occurred at this time (mainly at the beginning of the decade). [12] [8] After 1965 increased migration from Samoa republic. [6] At this time, many Samoans emigrated to Hawaii attracted by the presence of the Polynesian Cultural Center in this state. [7] In 1970s over 7,540 Western Samoans emigrated to the United States, although the number of people from American Samoa who emigrated to the USA is unknown. [13]

In 1972, the number of American Samoans living in the USA exceeded the Samoan population in American Samoa, and California took the place of Tutuila as the main Samoan-populated region. [14] In 1980 over 22,000 Samoa-born lived in the USA, mostly of Western Samoa (more than 13,200), while 9,300 were from American Samoa. [13]

According to 2019 U.S. Census Bureau estimates, there were 204,000 Samoan people in the United States stateside population, including those who have partial Samoan ancestry. [15] The Samoan American community consists in Americans of both American Samoan and Samoan descent. According to Unicef, 12,354 people from Independent Samoa lived in the U.S. in 2013. [16]

63,000 people of Samoan origin reside in California, meaning almost one-third of the Samoan population in the U.S. lives in California. 0.2% of California's population is of Samoan descent. The number of those who identify as Samoan alone is 36,443. [17] The percentages and numbers of Samoan people residing in cities listed below vary from 2015 to 2018, according to the "5-Year Estimates Detailed Tables" from the U.S. Census Bureau. [18]

Carson (1.8-2.2%), Compton (0.3-0.5%), and Long Beach (0.7-0.8%), and Paramount (0.7-1%) in Los Angeles County, Oceanside (0.5-0.6%) in San Diego County, and Twentynine Palms (0.9-1.1%) in San Bernardino County have among the highest concentration of Samoans in Southern California, which include those of partial ancestry. [19] Also in San Diego, the very first Samoan church in the entire United States, was founded in 1955 by Rev. Suitonu Galea'i. From there, multiple Samoan churches throughout California branched from the First Samoan Congregational Christian Church of San Diego. [20] [21] [22] Garden Grove in Orange County has a Samoan community, as well as a church located off Century Boulevard. There are Samoan communities enumerating several hundred in Moreno Valley (300 to 500) and San Bernardino (400), at least 0.2% of the city’s populations.

In the Central Valley and inland California, where compared to the Bay Area has a slightly smaller percentage of Samoans, higher populations are commonly found in the areas of Modesto (0.2%), Sacramento, and Stockton. The city of Sacramento has over 1,800 to 2,200 Samoans, about 0.4% of its population.

The Seattle− Tacoma, Washington area is also home to a sizable Samoan community, especially in the cities of Kent (1.5%), Renton (1%), Federal Way (1.6%), SeaTac (2.9%), and White Center (3.2%). [25] Seattle has 1,500 Samoans, 0.2% of the city's population. [18] The First Samoan Christian Congregational Church in the Washington state was established in 1964 in southeast Seattle, where Samoans settled in the Pacific Northwest. [26] The south Seattle neighborhoods of Columbia City and Rainier Valley have had sizeable Samoan communities since the 1960s and 1970s. Nearly 6,000 people of their descendants reside in Pierce County, Washington, making up 0.7% of the county's population. [27] Tacoma is home to 1,800 Samoans, making up nearly one percent of the city's population. [18]

The Dalles, Oregon has a Samoan community of nearly 200 Samoan people, making up 1.3% of the city's population. [18]

Utah and other western U.S.

Utah statewide is 0.6% Samoan including those with some non-Samoan ancestry, and 0.3% are those who identify as Samoan alone. [17] Utah has a history of Samoan immigration dating back to the late 1800s, due to them taking up Mormonism which was preached and influenced to them by missionairies who had came to Polynesian islands. Utah's Mormon community had housing and services for some Polynesian immigrants, which also included Tongans and Maoris. Salt Lake City, Utah is home to 1,500 Samoan-origin people, 0.7% of the city's population. [28] Salt Lake County cities such as Kearns (2%), Taylorsville (1.5%), and West Valley City (1.8%) having above average proportions of Samoan people for Utah. There is a sizable Samoan community in Provo, which is at least 0.3% Samoan. [18]

Outside the mainland U.S., many Samoan Americans have settled in Hawaii and Alaska. About 2.8% of Hawaiian residents are of Samoan descent, with 1.3% having full Samoan ancestry. Many live on the island of Oahu. Linapuni Street, especially the Kuhio Park Terrace apartments in Honolulu, has the highest concentration of Samoans of any residential area in Hawaii, at 37% of residents. Central Palolo has the highest percentage of any Hawaiian tract, with 4% having a Samoan background. [29] The Oahu town of Laie has 1,380 Samoan Americans, about 21% of the town, one of the highest concentration of Samoan Americas of any town or city in the U.S. [18]

Two percent of people in the city of Anchorage, Alaska are of Samoan descent, with nearly 6,000 living in the city. Alaska has a relatively high proportion of them, comprising about 0.8% of the state's population. [27] [18]

In the Midwest, a significant Samoan community is in Independence, Missouri, where around 1,000 Samoan people reside (0.9% of the city). In nearby Kansas City, Missouri there lives 340 Samoans, which is 0.1% of the city's population. [18]

In the Eastern United States and Southeastern United States, Samoan communities exist in Fayetteville, North Carolina and Clarksville, Tennessee. [30] There are 365 Samoan-origin people in Prince William County, Virginia, and a Samoan church in Alexandria. [31]

There is a community of Samoans in Liberty County, Georgia.

In Texas, there is a Samoan community prominent in the Dallas-Fort Worth suburb of Euless (0.5%), and a Samoan church in the city of Killeen (0.3%).

Significant numbers of Samoan Americans serve in the U.S. Military. America Samoa has the highest rate of military enlistment of any state or territory. [32]

American football is the most popular sport in American Samoa. Per capita, the Samoan Islands have produced the highest number of National Football League players. In 2010, it was estimated that a boy born to Samoan parents is 56 times more likely to get into the NFL than any other boy in America. [33] 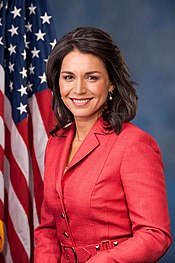 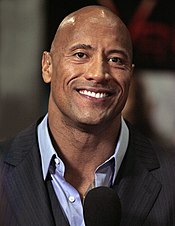 Dwayne "The Rock" Johnson, actor and wrestler. He is one-half Samoan.